However, it is surprise how lacking Kirby's latest effort is when it comes to ambition. After managing to bounce back with the beautiful Epic Yarn on Wii, and the innovative Mass Attack on DS, it's back to basics in Kirby's Adventure Wii. It's basic platforming without any new twist. You can jump and swallow. Gulp up a bunch of enemies and beat the enemies. The basic concept from Kirby's early days is followed to the letter.

It only takes a few seconds to grasp the controls and realise what is expected of me. I've come to expect surprises and an evolving gameplay that keeps me interest up, but with the exception of unlocking a few mediocre mini games everything drags on along the same lines throughout the game.

I'm surprised at how lacking in finesse and repetitive the experience becomes. The difficulty has been set remarkably low at the start. So low that I'm convinced the game is aimed at the youngest members of the family. While my 3 year-old is still too young to join in, it did excite. As for me and my friends it just lacked any sort of challenge. But that's not the only sign that the developers wanted to include everyone.

The multiplayer is brilliantly accessible. Up to three more players can join in at any time and drop out if they wish to. Apart from Kirby you get to play as Meta Knight, King Dedede, and Waddle Dee. There not nearly as fun as Kirby, something the developers seem to have realised as you can opt to play as different coloured Kirbys as well. If someone is left behind they are automatically flown up to the lead player without any penalty. The fact that the levels have been designed to work just as well for one as for four players means they are a bit bland. You never get into situations where co-operation is required to progress.

The controls aren't unnecessarily complicated. The Wiimote is held horisontally, and two buttons and a d-pad goes far in a game like this. There are a few tacked on motion controlled waves, but they occur very seldom and don't really bother me. The story is also kept to a minimum. Short cutscenes (that you can skip), paint the picture of a forgettable motive to do some platforming. Fetch things for nice alien, or something along those lines.

I appreciate the fact that there are family oriented games that don't make use of the latest animated hero from the big screen. Parents around 30 are surely interested in playing something they did as kids with their young ones. At times the game is wonderfully Kirby cute. I took a liking to a small animation that is played when a player eats a piece of candy to regenerate health. When you after having eaten brush up aganst another player to share the gained energy they give each other a quick embrace that may or may not involve a little kiss. It doesn't get much cuter than that.

Kirby is often involved in good games, but he is seldom the best. This time he's sight is set just above average and that's where he ends up. You'll be coasting through the experience without any problems. It's relaxed and void of any challenge. And in a way it almost feels mean to score it based on my experience.

With a child of the right age in the family you can definitely have a lot of fun with the little pink fellow. If you have kids who can handle a very basic platform game it's not a bad choice to put under the tree. You just need to consider the fact that there are way better alternatives in the genre such as New Super Mario Bros. Wii, Donkey Kong Country Returns and Rayman Origins.

Gamereactor UK
+
Easy to learn, family oriented, almost no Wiimote waving.
-
Low ambitions, boring mini games, lack of variation.
is our network score. What's yours? The network score is the average of every country's score

REVIEW. Written by Love Bolin | Gamereactor Sweden on the 25th of November 2011 at 09 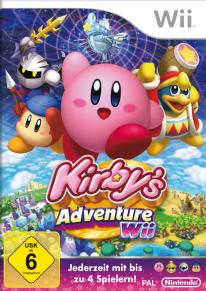