Ah, Kingdoms of Amalur: Reckoning. We go way back. Back eight years, in fact, to a simpler time, one where a fairy-tale world was all one really needed in life (certainly all anybody ever needs). It's a great game, filled with charm. And now, it's been re-released as the appropriately named Re-Reckoning. But does the original hold up today? And how about the changes they made in this version? Spoiler: there aren't many, and that's an issue.

Performance-wise, I played on Switch, which runs at mostly 30 FPS, except during some larger skirmishes and a little in towns. Handheld seemed smoother than docked but is at a resolution of 720p compared with 1080p while docked. The graphics are pretty sharp for what they are - though don't expect anything too amazing.

The game controls fluidly enough, but not being updated from the original it can feel unresponsive. You can't rebind controls either, and for some reason interact is the same as sprint - pressing versus holding - despite there not being anything assigned to the sticks. Who decided this? And shouldn't they be punished for invoking such misery? Jokes aside, it's a shame this hasn't been updated, and you'll see throughout the remaster that these little quality-of-life improvements have not been made.

For those that didn't play the original, Kingdoms of Amalur sees you play as the Fateless One, who is resurrected from the Well of Souls and is now outside of the reach of fate. Character creation is simple, straightforward, and pretty shallow. Unfortunately, character models have not been updated, so you'll still feel you're playing a game from two generations ago. Saying this, they're easily overlooked - with helmets on, of course (armour sets are detailed and hide that ugly face of yours).

The story is great, with interesting narrative beats to keep you going alongside side and faction quests. There are a total of seven factions (including DLC), all with unique questlines, so there is a lot for you to do. All this is steeped in lore written by fantasy author R.A. Salvatore, lending the game a heavy fairy-tale style, which is mirrored by its grand environments.

Amalur's world of the Faelands features five regions, each with a distinct theme. It is linear, and one of the issues is that each zone is linked by a corridor, removing the illusion of an open world, but it's not such a problem, just don't go in expecting a fully open-world RPG. Each major city feels different and lived-in, as much of the world does because of the richness of the world and its history. Re-Reckoning includes dynamic zone levelling, so you will face enemies your own level when returning to earlier locations. Whilst this is good for farming (which isn't necessary, but you can get some rare items, including sets), it does alter the sense of progression and makes you feel weaker as you journey through the world (so the one big change they made might not be so good after all!)

The Re-Reckoning edition also includes both of the previously-released DLCs, which take five to ten hours each to complete, and offer their own locations, items, and quests. Also, there is a new DLC releasing later this year, which will bring even more great content.

Amalur's world and its story hold up; it's not just nostalgia talking. It's worth playing for these aspects. However, the gameplay is not as good as it could be, and this is where new players will find issues.

So, gameplay. Levelling works as in any other RPG, except you also get to choose a card to represent your class (which you choose by allotting skill points and taking one of these cards), offering you extra attribute bonuses and other stats. It's a good system, and adds a little charm to the levelling process. There are also systems like alchemy and enchanting which can be upgraded too, and they're pretty cool, though not necessary to stay alive.

Combat is fun, though clunky, with attacking and dodging feeling stiff, especially compared with contemporary games. This slowness doesn't go away, but once you have more options (skills, weapons, etc.), combat does open up. Among these options are multiple weapon types, of which the chakram is my favorite - discs that can be thrown like boomerangs and are imbued with magical energy, something I've never seen in a game since. Each feels different and can be upgraded using skill points to gain new moves and stat increases. These moves are particularly great as they offer unique animations and powerful damage. Still, it's slow, but combos do make you look cool, so they're definitely some options you'll want to explore.

Now, a word on the camera. It's quite annoying, as it was in the original, but luckily the remaster has included new settings. I recommend changing the camera height and follow delay, so you can actually see what's going on and prevent motion-sickness, alongside appreciating the world and its use of verticality. Despite there being these options, it could still have been improved. Combat, for instance, can still be troublesome with the camera getting caught on walls or objects, and with combat camera off, it's difficult to know when you're actually in combat.

Overall, Kingdoms of Amalur: Re-Reckoning is still great, and worth playing. While its combat leaves something to be desired nine years later, its world and story make the experience worth it. It's just a shame that not much was changed in this version, but still, with new content coming later this year, it is a great time to revisit one of the best RPGs of the last decade.

Advertisements
Gamereactor UK
+
Excellent lore and world-building. Varied locations to explore. Interesting weapons and skills.
-
It's nearly a port of the original. You can't rebind the controls. Combat is stiff and clunky.
is our network score. What's yours? The network score is the average of every country's score

"In short, it's not quite the triumphant return that this underrated adventure undoubtedly deserved."

Kingdoms of Amalur: Re-Reckoning is coming to Nintendo Switch on March 16, 2021

The remaster of the near decade old cult classic has found itself a new home.

We are playing Kingdoms of Amalur: Re-Reckoning on today's GR Live

The graphically enhanced version of the fantasy RPG is the focus of today's stream.

Become a sorcerer in Kingdoms of Amalur: Re-Reckoning

Kingdoms of Amalur: Re-Reckoning is less than 30GB in size

The upcoming remaster of 2012 RPG Kingdoms of Amalur won't take up that much space on your hard drive.

THQ Nordic is back with another interestingly named revival, this time of fantasy RPG Kingdoms of Amalur. 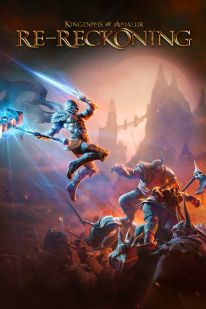