I've been playing Killer Instinct until my thumbs hurt. The left analog stick didn't give me the level of control that I needed so I switched to the Xbox One controller's new-look D-Pad fairly early on in proceedings (side note: it's much superior to the Xbox 360's for fighters). While my game has certainly improved as a result, my left thumb feels like it's about to fall off. Let me tell you why...

Double Helix have resurrected the classic franchise that was first launched by Rare back in 1994. It's a 2.5D fighter, with 3D models battling across at 2D plane. It's all about combos, combos and combos, exact button taps, fluid movement. Attack and defend.

At the time of writing there's currently six characters for players to flex their muscles with (we were given a digital copy of the Ultra Edition - which is the complete package - for the purposes of this review, though when the Xbox One launches there'll be different digital packs at different price points to choose from).

I started off on ‘Noob' difficulty, which proved far too easy, even for someone who - like me - isn't a hardcore fighter fan. Heading to ‘Easy' my confidence was blown away by a string of potent combo attacks and devastating close-quarter special moves. My next port of call was the game's tutorial. It was time to go back to fighter school if I was going to avoid further embarrassment.

The Dojo is as comprehensive as it is impressive. 32 levels of training are on hand to guide players through the intricacies of combat. Some of the moves can be incredibly tricky to master, even with the inputs laid out for you, but playing through will improve your game no end (and it will likely educate many players on the wider genre in general). Some of the training exercises were very frustrating; no matter how many times I inputted the commands, the moves being demanded wouldn't play out as intended. In the end I gave up on a few because it started to feel like banging my head against a brick wall. Still, despite the odd hiccup, it's a decent setup and a standout feature.

Combat is built on a bedrock of standard cut and thrust between characters; backing away from your opponent acts as a block, there's aerial attacks, throws, low and midrange hit-boxes to aim at, three varieties of punch, another three different types of kick. Where Killer Instinct - like its illustrious forebears - gets its identity, is in the combo system. You can start off an attack with an Opener, that can then be followed up with a button tap that translates into a two-hit attack, which can then be followed by a second combo, linked with another button tap, then concluded by a combo Ender. String that many hits together and your opponent will be penned in the corner and taking huge amounts of damage.

Combo Breakers, if timed right, can put an end to a furious flurry of blows, and Counter Breakers can reverse a Combo Breaker (the more advanced the skills of the fighters, the more important these moves become). There's Shadow Attacks - variants of each character's special moves that offer even more tactical variety. By attacking your enemy you fill the Shadow Meter at the bottom of the screen, and these moves are faster and more powerful than their vanilla versions. There's an Instinct Bar under your health that, when filled, allows for health regeneration and increases the amount your attacks stun your opponents. It goes deeper than that, with various types of combos, air juggling, reversal attacks and more. The further you dig, the deeper it goes.

There's six characters in the roster at the moment, which isn't very many whichever way you look at it. Each is suitably unique, move-sets haven't been shared around, and the complexity of the different fighter's repertoires ensures that learning the subtleties of each will take a considerable investment of time. Two more are coming in the following months, which will help things, but even eight can't be considered generous.

I spent a lot of time playing as Jago (as will many others - he's the free character that everyone can play as by way of a demo), simply because he's the character that stars in the Dojo mode. He's very much an all-rounder, with accessible special moves and straight forward combos.

Other characters require different approaches. Orchid - who looks like she's going to rave with a glow-stick in each hand - is fast and full of spin kicks. Glacius (my nemesis in the game) and Thunder are both powerful, but a little on the slow side. Sabrewulf is fast and furious when you can get up close and personal, and it was with him that I was able to put together my longest combos. Sadira, who's new to franchise, delivers her most powerful attacks from the air. The other two characters - Spinal and Fulgore - are coming to the game early next year.

I spent a fair amount of time with all of the different fighters, though I quickly developed my own preferences. At all times I was methodical in my approach, and purposeful with my attacks. Slowly and surely I started to get to grips with the controls, and was able to string together increasingly large combos. Interestingly, our freelancer Jon Newcombe sat down to have a go (while I gave my thumb a much needed rest), and by mashing buttons and pressing forward he was able to put together some impressive attacks. To remain competitive new players will have to adopt similar tactics, whereas seasoned players will be able to dig into a deeper well of strategies, countering these haphazard attacks with greater control and assurance. The rapidity of the special attacks and combos ensures that the fights are frantic, but as you improve and get to grips with the game's systems, order forms in amongst the chaos.

Visually, it's a treat. The six characters are all intricately designed, well animated, and the movements are smooth. It's also very fast, transitions between moves flash by in the blink of an eye, but there's clear visual clues on screen to indicate when characters are stunned. The background of each stage is also crammed full of detail. Each marries up with a specific character, so hopefully more arenas will be coming with the yet-to-be-released characters.

There's no story mode to speak of, which takes the edge off a little. The whole package feels lean without it. What there is is a selection of versus modes (Player vs Player, Player vs CPU, CPU vs CPU), a survival mode whereby players face a string of enemies in best of three bouts until they're beaten, and then practice and Dojo modes to sharpen skills. Venturing online - something that we were unable to do - offers players the chance to battle in ranked and exhibition modes.

You earn KP for completing various Fight Titles (win so many fights, beat so many tutorials), and using these in-game credits you can unlock different stages (you only start off with one), audio and concept art. Beyond the general Titles, each character has their own set, and they're rewarded for reaching different milestones and by pulling of certain moves. As you earn more, increasing amounts of customisation options, emblems, profile backgrounds and more are unlocked, giving you further scope to personalise your favourite characters and your profile. It's a fun and addicting meta-game.

Another nice touch is you can go back and watch your older fights, analysing your moves and seeing where you got it wrong. You can even slow it down to half speed, so you can clearly see all the movements, and when it's running at this pace it's easier to admire the technical quality of the game. There's a comprehensive stats database, where you can see how you've performed across all modes. However, even with all these trimmings, the limited roster still looms large.

Killer Instinct is a technically complex fighter, and it's deep despite the shallow pool of characters. It'll definitely appeal to the more hardcore genre fans out there, who'll no doubt benefit from using the arcade stick (which is also set to be released at the same time as the game). For casual fighters there's a significant barrier to entry. If you can overcome the complexity and get to grips with the myriad of combos, breakers and special moves, there's a really good fighting game waiting for you, but it's a big ‘if'. My poor aching thumb is a testament to that. Our advice for casual players: download the one character demo. It's free, and you can see what you're up against if you take the plunge. More serious fighter fans will probably want to take advantage of the try-before-you-buy feature, just because they can, but it's likely that many of them will stick around to carry on the fight.

The basic version of Killer Instinct is free to download, and includes Jago as the only playable character. Characters can then be purchased on an individual basis. The Combo Breaker Pack includes all 8 fighters (6 at launch, 2 early next year) and costs £16.99. The Ultra Edition will cost £34.99 and includes the same roster of fighters, along all of the accessories, costumes, and a copy of the original game.

Gamereactor UK
+
Visually impressive, intense combat, great training mode
-
Small roster of fighters, lack of story mode
is our network score. What's yours? The network score is the average of every country's score

"Killer Instinct is a technically complicated fighter, and it's deep despite the shallow pool of characters."

Phil Spencer: "It is not due to any kind of lack of desire on our part that we're not doing more with KI".

This is according to two different Xbox insiders.

Despite no rumours or news of a sequel, the fighting game is doing well with the community.

The history of Killer Instinct revealed in new documentary

Take a trip down memory lane and learn more about the making of iconic fighting series Killer Instinct.

Microsoft seems to have Killer Instinct news to share tomorrow

Tune into Mixer to find out.

Thank you for your time. We will take care of this matter as soon as posible
This looks awesome. I want this so bad.

Thank you for your time. We will take care of this matter as soon as posible
Quote Tom Tomato:

This looks awesome. I want this so bad.

Yeah, what he said.
There will always be people that say mean words because you are different. But there are many more people that do not judge a person based on how they look, or where they came from. Those are the people whose words truly matter. 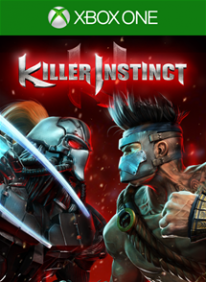