Metroid Prime Trilogy first appeared on Nintendo Wii in 2009 (later also on Wii U), bringing together three fantastic masterpieces from the Metroid Prime series on a single disc. In the past, a re-edition of this compilation on Nintendo Switch has been rumoured, without any confirmation from Nintendo, but it seems that fans of the series will soon see their Metroid hunger sated.

As reported by Twitter user McTroid, the collection appeared on the website of the American retailer BestBuy (page then removed), with no information. We are not aware of a release date, but according to the screen published on Twitter, there's a "pending" ESRB classification.

It remains to be seen if Nintendo is willing to republish Metroid Prime Trilogy on Switch for real, perhaps as an appetizer to Metroid Prime 4, which reset its development and started from scratch in early 2019, after Nintendo had declared not satisfied with the quality level of the game developed up until that point.

Rogue Dawn is a retro homage to the series.

Or Donkey Kong, for that matter.

Nintendo: We know you want a new Metroid

Your chance to reconnect with Samus Aran. 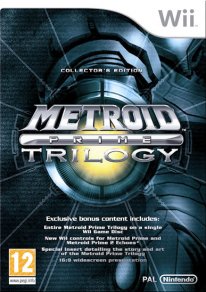