Imperator: Rome is the latest Paradox-authored grand strategy game to take us back to the royal courts and battlefields of yesteryear. Once again, at the helm of one of history's great nations (or some rural backwater if you prefer a sterner challenge), players are invited to write their own story into the pages of ancient history, starting in 304 BCE and finishing almost three hundred years later in 27 BCE. With a wealth of playable nations to choose from, one of your hardest decisions is going to be picking which country to play as in the first place, and after smashing our way up and down Italy and failing spectacularly to unite Britannia, we decided to take control of one of history's most famous military forces. This is Sparta.

And it had all been going so well, but we knew there was trouble coming when Macedonia sent our allies back home with their proverbial tails between their legs; their once-proud armies scattered to the winds and in complete disarray. The considerable forces of our new-found enemy (looking back, that alliance we had forged earlier wasn't worth the hassle) followed them down into our corner of Greece, and it wasn't long before our own capital was under siege. We dodged that bullet, as they weren't able to land a killing blow what with our allies still active in the area, although we didn't dodge the next, as Egypt - fresh from blockading our friends down in Crete - sailed its monstrous army up to our failing state and duly wiped it off the map.

Normally at that point, with your armies eradicated and your empire in ruins, it would be time to wipe the slate clean and start again, but in Paradox grand strategy games, that's not always the case. As we've seen in the past, in particular from historical happy families simulator Crusader Kings 2, sometimes it's worth sticking around after the party looks like it's over to see what comes next because interesting things can happen in the wake of a disaster. And so, with our progress ostensibly cleared from the board, we tried hanging around to see what might come to pass. Alas, the sometimes wonderful character-driven moments we've seen in CK2 don't seem to be as abundant here and, after a few years spent wallowing in insignificance, things somewhat fizzled out for our little empire. Sparta, this was not.

Part of the problem was that the events that help the player feel like the author of their own story just didn't feel as coherent as they might have. In our case, one minute our ruler was mad and frothing at the mouth, the next he was annoying the clergy, and then he was being praised by the same people who had just complained about him - and this was all within a few years of leading his once-growing empire in southern Greece to the brink of total annihilation. These events simply didn't make sense given the context of the situation, and our attempts to role-play each scenario were held back by this narrative dissonance.

What's more is that we encountered a similar set of niggles when controlling Rome. In the burgeoning empire that gives the game its name, there's a political system that means chopping and changing leaders every few years (which equates to just a few minutes in Imperator). As a result of playing lots of political musical chairs, we found it harder to grow attached to the characters under our charge. We were pushed in the general direction of taking an interest in the ensemble cast of movers and shakers, almost like we were back in CK2, but we don't think the narrative payback is quite as generous this time around.

That's not to say that there aren't stories being generated all the time in Imperator: Rome. In fact, there's so much going on in this latest game by Paradox Development Studio that it's impossible to go for a few minutes without something interesting taking place. While we noted a bit of repetition in terms of in-game events, there is still a lot of information to take in and plenty of decisions to weigh up. There are so many systems working together in this sandbox, and that medley of mechanics can spit out some interesting scenarios, especially when you're operating in a congested area where there are lots of treaties to watch out for and a number of potential enemies coiled up nearby and waiting to strike.

Paradox keeps its many systems in check by keeping things relatively simple. The new trade system, for example, is elegant and straightforward and - in our opinion at least - a huge improvement over the one from Europa Universalis IV. You can easily trade items you have a surplus of, and import goods that you need from your neighbours, with different resources providing different passive benefits to your state. It's not just a case of striking a good deal with any old trading partner, and there's much more to think about than just the bottom line.

Elsewhere the political systems are interesting and diverse (based on what we've experienced so far), although as we've already mentioned, we think a bit more personality from the characters would've made this portion of the game more memorable. There are lots of potential ways to tinker with your government and the recruitment process is vitally important and surprisingly nuanced, but otherwise, your options are kept as straightforward as possible, presumably to stop the whole thing from spiralling into an imbalanced mess of nonsensical intrigue.

While this sandbox simulation might be relatively shallow - at least compared to any other Paradox game that's had a few updates - it's still expansive in a lot of ways. The map, for example, stretches from Scotland to India, and it's filled with different cultures and ideologies that are all playable. Your choice of starting point will greatly impact on your overall experience, and there seems to be a decent level of differentiation between the various societies. This melting pot of nations makes for some exciting moments, although it's probably fair to say that the majority of the playable states aren't given the same level of forensic detail that's visible amongst the more dominant countries.

If you're familiar with Paradox's past works then you'll quickly be at home when it comes to the user interface. As per, you can pause and speed up time, filter the mini-map depending on what you're looking for, and your main systems are accessed via buttons on the top left of the screen. The studio is pretty good at making the complicated accessible, but there's a dizzying amount of detail to take in here and it's not all clear how everything fits together. The tutorial was quite good at providing a rough overview of the game, but the lack of an in-game wiki and/or more detailed tooltips was a bit of a head-scratcher. Given the huge number of interlocking systems, a bit more transparency would've enhanced our experience considerably because sometimes it felt like we were making uninformed decisions (especially during the first 20 or so hours).

The map upon which all this strategising takes place looks great, and everything has been carefully woven together with lots of detail added to the various regions around the world that you explore and fight over. Hiding a lot of the functionality away via various pop-up menus means that the map is relatively clean-looking (and we love the visual filters), although sometimes the screen can get a bit cluttered when there are several windows open, armies and navies are moving about the map, and in particular when you've got an empire big enough that you're having to put out fires on more than one front.

Combat works much as before, with players creating their armies and then smashing them into those of their opponents. When viewed from a distance the battles might appear overly simple what with them represented by two little avatars that go through the motions while numbers rise and fall just beneath, however, the effectiveness of the military arm of your empire is usually decided by decisions made elsewhere and those solitary little figures symbolise much more than their simplistic expression might suggest. In essence, your armies are an extension of your empire rather than something separate and detached, and you can't have a strong and well-balanced fighting force without taking care of all aspects of your growing empire.

One area that already feels ripe for expansion is diplomacy, and we can see the overall experience benefitting from more nuanced interactions with AI-controlled factions. While we don't have major complaints about the overall AI, with all the alliances and defensive leagues that are being formed it would have been nice to have had more options when it came to our positioning of armies, especially when battling against stronger opponents where coordination with AI-allies might make all the difference. This, in turn, can lead to scrappy wars with fragmented armies chasing each other around the place, and we think that these protracted cat-and-mouse sequences could have been dealt with more decisively.

Some relatively minor niggles aside, Imperator: Rome is an accomplished strategy game that has launched in a solid state. It's clear that there's more still to come, and no doubt Paradox's post-launch plan involves expansions that will introduce new themes and factions, as well as even potentially new a start/end date. While we wait for new ways to play and fresh problems to solve, there's already a lot here to engage with, and thanks to the breadth of the overall experience, we think this is one strategy game that will be fun to explore from a number of different perspectives.

Gamereactor UK
+
The map looks great, nice differentiation between the various nations, lots of interesting decisions to make, the trade system is particularly good.
-
Diplomacy felt a little limiting, an in-game wiki would have been nice.
is our network score. What's yours? The network score is the average of every country's score

Conquer the classical world and govern your people. 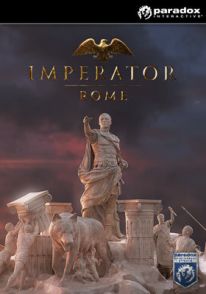