After a pretty exciting and adventure-filled few months, the final expansion for Immortals: Fenyx Rising has landed, in the top-down mini-RPG, The Lost Gods. Unlike its predecessors or the base game, The Lost Gods doesn't use the same third-person perspective, and while it does feature our newfound fantastic hero or heroine, Fenyx, the storyline follows Ash, a mortal who has been selected to complete the will of the Gods.

Taking place after the events of The New God DLC, The Lost Gods sees the Greek pantheon in disarray after Zeus and a few of the other Gods grew apart following a disagreement. Angry at Zeus, Poseidon, Hades, and a few others left Olympus to create their own land that they could rule without the King of the Gods in their way, Pyrite Island, but in the course of doing so, the rest of the world has become unbalanced, with natural disasters causing immeasurable damages to mortals and the Earth they call home. The new God of Unity, Fenyx and the God of Wisdom, Athena have taken it upon themselves to bring the Gods home to Olympus to make the world safe and hospitable again. But, with Zeus putting Fenyx in lockdown and unable to leave Olympus, Fenyx has to rely on a bit of outside help, help found in the silver-haired mortal Ash.

Unlike previous Immortals: Fenyx Rising DLCs, The Lost Gods plays from a top-down isometric point of view, like a Diablo game, to make for an experience that is unique to what came before it. There are plenty of similarities all the same, including having a sword, bow, axe, and Godly Powers, but at the same time there are a wide array of differences, including the new upgrading system and the many new lootable resources.

The new upgrading and resource system is basically a jacked-up version of the upgrading system that was present beforehand, except this time, instead of spending Coins of Charon or Zeus' Lightning Bolts to directly unlock new upgrades, this is now tied to spending resources and then enhancing them with Essences. Essentially, you have to first gather the necessary materials to be able to unlock an upgrade, which could be something as straightforward as different flowers and fruits, or more complex like rough diamonds and monster parts, to be able to buy an upgrade at one of the Altars (fast travel points) dotted around the map. You can then present these resources to the Altar as an offering to please Fenyx and the Gods to enhance Ash's abilities.

To build on this further, you will need Essences, which can be found occasionally from defeating monsters, to then place into one of several slots (known in-game as Divine Influences) tied to each ability to unlock further new enhanced features, such as being able to use the ability while airborne or to add new effects such as extra health to Ash, or a damage increase upon making a successful block.

This confusing system isn't particularly aided by the Offerings you can also acquire that will buff Ash with defence or attack, refill her health bar, or even simply just save the game manually - all of which will require resources to be able to complete. Then, if all of this didn't seem like a lot to get your head around for a simple RPG as Immortals was previously known for, you also still have to collect the various coloured crystals to be able to upgrade the damage and defence of your weapons and armour.

It is challenging to see this system as something that isn't convoluted or overtly complex, especially since Immortals was previously known for being such a simple and straightforward RPG. Could it do with toning down a tad? Probably. But, it's not oppressing enough to make or break The Lost Gods.

With The Lost Gods being set in a completely new area, different to the Golden Isle, Olympus, or the Eastern Realm, there is an entirely new map to explore. This map isn't as large as the other maps, but with the change to the camera angle and the slower, methodical start that equips Ash with new abilities and skills very infrequently, it will take quite a while to explore and complete everything that is on offer.

And, to make this map a little more interesting, you will have a variety of objectives to complete tied to the various "lost" gods. These range from more expansive tasks such as completing Vaults of Tartaros to find and destroy strange tablets that lurk within for Hades, or alternatively could just be to play a game of tag with Poseidon. Stack these up with a bunch of side quests that will see you free a village of monsters for example, and you get an experience that features quite a lot of content to chew through.

My experience with the DLC has been a conflicting one, because I am a massive fan of the base Immortals: Fenyx Rising game. I do like this new style of adventure, and there's plenty to keep you occupied, but the upgrading system and slow pace of the DLC often makes me lose interest, especially since Pyrite Island isn't nearly as freeing or engaging to explore as the Golden Isle or the Eastern Realm is.

With this being said, I will say that if you are a fan of the humour and lore that Immortals explores, The Lost Gods delivers more on that front, provided you can remain engaged to consume it. But, is this the best way to enjoy Immortals: Fenyx Rising? Not quite. The base game and its straightforward open world RPG formula still reigns supreme.

Gamereactor UK
+
New perspective is interesting. Entertaining humour and lore remains intact. Plenty of content to keep you occupied.
-
Upgrading system is needlessly complex. Pacing is a little slow. Not as engaging as the base game.
is our network score. What's yours? The network score is the average of every country's score 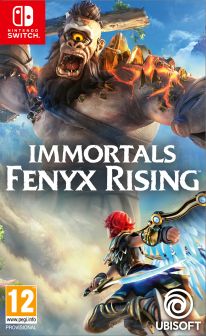