The first H.A.W.X. had potential, but a bunch of poor choices ruined the whole experience. It felt unfocused, too sluggish for an action flight sim, too simple to be a proper flight sim. Ubisoft's Romanian studio has built on the foundation, and the end result is much improved this time around.

In a near future, the relative calm is disrupted by a number of attacks around the world, a hi-jacked plane in Edinburgh, the bombing of an American air base in Saudi Arabia, and a violent separatist movement in Russia. On top of this someone has managed to steal three nuclear warheads out of the ageing Soviet stockpiles. To set things straight you plant your arse in the cockpit and complete missions around the world and save the day Top Gun style.

The whole setting has a more serious feel to it. Some missions start off at the ground, where I begin by rolling onto the tarmac, which is far more exciting than it sounds when you are under attack. You will also refuel in the air at times and land your craft, elements the original lacked. The missions feel more complete, when I'm not just involved in a dogfight.

That said, the aerial combat is excellent. The semi-automatic tracking system that drew out attack lines has been thrown out, and it's back to some good old fashioned "track the enemy down on the radar, and take him out". Send out a bunch of missiles at whatever you get a fix on, pull up when you've got missiles sniffing your tail, and end it all with a rain of bullets as an angry Russian makes a last ditch attempt to evade you. They are intense with dozens of metal birds, and even if it's a bit unrealistic (as long as you don't turn up the difficulty to "frustratingly realistic"), it's a lot of fun, and that's the main thing.

There is also plenty of variation. In between the more traditional flight missions, you're given opportunities to go on bomb runs, man the cannon of a larger plane, and control unmanned planes on reconnaissance missions and other high-tech stuff. It adds variation and wards off boredom, even if I prefer the poor dogfight missions the most. When it's at its most entertaining, it's close to get an even higher score.

Unfortunately Ubisoft did not pay attention to one basic rule of game design. Escort missions suck, and are the invention of the devil. One minute you dive through canyons like an immortal Tom Cruise, and the next minute you are forced to babysit a bunch of allies who head straight into an ambush and get blown to pieces before I can make out which one of the 45 blips on the radar I need to take out first. A voice tells me to destroy the artillery on the ground, but before I even make it there I have helicopters to take out. Meanwhile, something else was the real threat and my friends are dead while I haven't even gotten a scratch.

Apart from poor design choices such as the one above, H.A.W.X. 2 is an enormous leap ahead, and with a bit of devotion you can manage to pull through and enjoy the rest of the game. There is a whole range of classic planes (MIG-29, SAAB-39 Gripen, A10-A Thunderbolt, Harrier, Mirage 2000, Eurofighter Typhoon, F-15C Eagle, F-22 Raptor, F-117 Nighthawk, F-14A Tomcat, and others), just as in the first game and there are also lots of game modes. Apart from the story mode, you also have the option of replaying specific missions to earn experience (that unlocks new abilities), or to fly freely over the various environments and check things out, to play a survival mode with increasing difficulty, or to play the game with your friends. Eight players can face off online, and you can also link up locally to play. You can also pick a certain area if you want to have some fun with older planes rather than the modern technological wonders.

The graphics have also been given an overhaul. The plane models are as details as before, but the environments are more varied and exciting. I really enjoyed the mission where you take off from an carrier at sunrise and the combat that could place near some Russian mountain range, when the visuals came across as almost photorealistic. The cities have been built with satellite images and feature bunches of trees and houses that look like boxes are on the other side of the spectrum, but then again you are not exactly meant to fly that low over Tokyo when you're trying to take out some separatist scum.

Flight fanatics with patience and a good tactical sense should definitely check this out. If you are more of an arcade flight jockey, you are better off waiting for Ace Combat: Assault Horizon.

REVIEW. Written by Mikael Sundberg (Gamereactor Sweden) on the 3rd of September 2010 at 13

Ubisoft show off the flying game 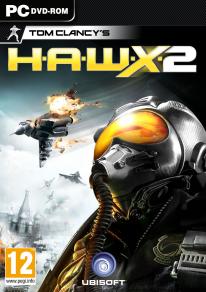