Back in 1997 Codemasters gave us the legendary TOCA Touring Car Championship. The game was loved by almost everyone, and that is one of the reasons why people have been excited about the 2019 release of Grid which is going to bring us back to the roots. After all, there have been other Grid games before, but does this one capture the magic of racing all over again?

This year's Grid is returning to the fast-paced asphalt racing we know from the original TOCA game, but it's worth noting that it lacks a lot of things to make this a stellar racer. Codemasters has made brilliant simulators with the F1 and Dirt Rally series, but they are struggling with taking the simulator feeling to the asphalt street cars.

The driving in Grid is not even close to realistic, sadly. When we expect the car to oversteer, it understeers, and when we expect the vehicle to drift, it grips even without any assists like traction control activated. When we drive through a puddle on the road, it does nothing, until all of a sudden you get water planing, even if the road seems clear. We like the feeling of the water planing itself, don't get us wrong, but when it comes at us completely random it makes it very hard to predict and control.

The rain looks good on-screen at least though. By no means are the graphics in this game amazing, but it works, when it's not dropping frames. Several times during our gaming sessions on the PlayStation 4 Pro we experienced frame drops and the sound cutting out. This is particularly unfortunate just before a sharp turn or an overtake.

The sounds in the game aren't great overall, in fact, as the engines sound like a good old Ridge Racer game, and there is no real difference in the sound as we drive through a tunnel. The graphics and audio in this game are very underwhelming in general considering how great Codemasters has made their latest racing games look like, and how high the benchmark is elsewhere in the genre.

The career mode in Grid lets us jump back and forward between the various group of cars, which is a good thing. That said, there just aren't enough events to participate in for it to be a really gripping career mode. At the hardest difficulty it's kind of challenging, but even at this point we win the races by a fair margin, and with the shortage of events, the career mode will be over in no time. With it being this short, we were hoping that the multiplayer section would catch us in.

Sadly, it does not. The multiplayer part of the game is very simplistic. Featuring a single Quick Race option, there is no way for us to filter for group of cars, location, or even drive assists. This means that we would have to compete against fully assisted drivers, for instance, which can be a little annoying on a rainy surface. What is done well, however, is the fact that our car turns in to a ghost almost immediately if we are unlucky enough to spin out or drive sideways onto the road again.

To summarise, Grid is a disappointment. We might have had too high expectations, and it might be unfair to Codemasters to dislike their game because of that, but we also feel that they built these expectations themselves by proclaiming this as 'the return of Grid'.

The feeling is better than the TOCA series, but not as good as we expect 22 years later, but when compared to other racers, even from Codemasters themselves, Grid falls short of expectations With all this being said Grid is a very decent game for the arcade racer. If you had fun with Ridge Racer and possibly Need for Speed games, you will love Grid for a little while at least. That is, until the content runs out.

Advertisements
Gamereactor UK
+
Good variety in the career mode, Good customisation options with decals, Fun for a short time.
-
Not a sim racer by any means, Driving physics don't relate to reality, Career is too short, No detailed tuning setup, Underwhelming graphics, sounds, and multiplayer.
is our network score. What's yours? The network score is the average of every country's score 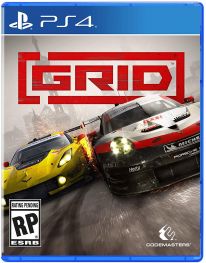