Not when we're talking about one of the best racing studios the world has ever seen coming back onto the track with a new title. Yet having played the original Grid religiously and poured numerous hours into this sequel, it does feel that Codemasters have become comfortable with the formula created first time round, and rather than pushing the envelope further, have decided to stick with what works.

When you've revolutionised a genre, captivated fans and critics and sold millions of games, then it's difficult to break with what you've done in the past. It's easy to simply repeat the formula that has been so successful in previous years. Activision, Infinity Ward and Treyarch are guilty of the same sins with Call of Duty. Unfortunately Codemasters are now falling into the same category. They are comfortable and confident in their Race Driver concept, the same concept that has helped their Dirt and F1 releases flourish.

Grid 2 is far from a poor game. It's the opposite. It's a beautifully put together mix of realism and arcade inspired physics, filled to the brim with attitude and racing disciplines. However, it's not without issues and I want to make it clear that I enjoyed the first game so much more. Race Driver: Grid was more varied, better balanced, better optimised, featured better aesthetics, level design and a more inspired presentation. Grid was something of a milestone in the arcade racing genre. Grid 2 is a slightly underwhelming sequel that simply fails to live up to the bar set by the predecessor. Unfortunately.

The concept is identical to the previous game. The same brand of career mode that we've seen in the three Dirt titles (and Codemasters' F1 games) is back again. You take on the role of a rookie driver tasked with rising through the ranks of amateur racing to the big leagues and the World Series Racing, where the real money is.

The road to WSR is rather quick, even if your coach keeps saying how long and difficult it is. After about an hour you're done racing in the minors, and you'll start racing in the American leg of the fictional racing series (WSR). After an hour or two racing on American soil the competitions continue in Europe. A couple more hours and you're off to Japan, where you win the whole cup before you really feel like you've gotten started.

That's right. Grid 2 is surprisingly short, and at times it comes across as more of an expansion than the fully loaded sequel we had been expecting. It's all over before things really get going, and it's all too easy. The difficulty settings have been poorly balanced, and even when playing on Hard settings, you can win certain races with a two minutes margin to the second placed car, while in the next race everyone leaves you in the dust at the start line and you have to work your way up through the field to a frustrating second place finish.

Equally unbalanced is the sense of speed, that - in spite of comparable cars - differs a tad too much between races. At times you'll feel sick to your stomach from the Wipeout-esque speeds achieved by your race-tuned sports car, while the Touring Car races, and some of the city races, make it feel as though someone has put a rock underneath the accelerator. The game is plagued in several areas by these type of inconsistencies, and it just comes across as poor optimisation in the end, and this is something I never experienced during the months I spent with Race Driver: Grid.

The career mode in Grid 2 also lacks the personality and atmosphere found in Race Driver: Grid. A helpful coach guides you through the various leagues and motivates you before each race, but the concept feels tired and most of the time I just wanted the old man to shut up and let me focus on the racing. The garage, where you tune your cars and pick the next event, looks almost identical to the one from the first game and the information laden load screens feel taken from Dirt 3. Everything adds to the sense of repetition of proven and trusted components.

If you've made it this far you're probably tired of my whining, but there is only more thing I feel the need to complain about and that's the course design. Codemasters have chosen to place a lot of the races in Paris, Barcelona, and London - and all of these city tracks are boring compared to the ones found in the first game. Wide corners with little challenge are mixed with tight corners that almost exclusively feature a late apex, requiring you to enter it tight and then allow the car to oversteer towards the exit.

As far as the audio-visual elements go, Grid 2 excels. Sure, it's a little disappointing that the game lacks some of the colourful personality of its predecessor, but you cannot escape the fact that Codemasters are top of the class as far as visuals go. The car models are well crafted, the tracks detailed and beautiful, and the lighting is almost uncanny. It should be noted that the framerate is a little uneven on console. The sound is as impressive as the visuals. Engines sing to their hearts content each time you step on the accelerator. Add to this a competent surround mix and nice environmental sounds.

Grid 2 is a technically sound game with 70 great cars, and nice physics. But it just doesn't live up to the first game. The online component has been cut down, and represents another minus compared to Race Driver: Grid - and both track design and difficulty tuning leaves a lot to be desired. Codemasters needs some fresh ideas, and they need to enter the next generation without the bagage of their past successes.

"Grid was something of a milestone in the arcade racing genre. Grid 2 is a slightly underwhelming sequel that simply fails to live up to the bar set by the predecessor."

Grid 2 tears up the charts

No such luck for Fuse, which doesn't even make the top twenty.

Enter our competition to be in with a chance of racing away with a copy of the latest Codemasters title.

Taking to the streets of Chicago, drifting in Japan, and racing at Red Bull Ring. 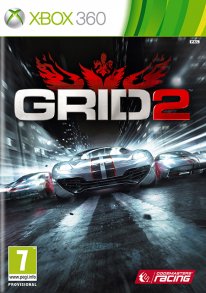