Once upon a time there was a series called Command & Conquer, and it flourished under the care of Westwood. Then Electronic Arts bought the studio, and subsequently put new developers in charge of the real-time strategy franchise. Even though the last Westwood employee left EA over 10 years ago, they didn't disappear from the gaming scene completely. Part of the team went and started a company called Petroglyph Games, and this studio have now collaborated with Weta Workshop (formed by Peter Jackson) to create a pretty decent but horribly named spiritual successor to the C&C series.

Grey Goo draws its influences from the classic setting, where three factions are exploiting resources, building their respective armed forces, and finally trying to wipe the competition from the face of the earth. These days this kind of setup is sure to draw instant comparisons to Starcraft, but that series is also built on the foundations created by Westwood's classic C&C series (and looking back further, Dune II). But where Starcraft is made for piano players and super-fast competitive gamers, Grey Goo is made for players with slower fingers (read: older).

In Grey Goo the plot is as follows: the world has come to an end as we know it, and self-replicating nanomachines are transforming the surface of the planet into a (you guessed it) Grey Goo. This blob is one of the playable factions, and it sits alongside the humans and some aliens calling themselves the Beta. The story won't win any awards, but it still fulfils its purpose. And the cutscenes are certainly very well done. Weta has created footage where at times you can't tell if you're watching an actor or a digital model.

Each of the three factions works around their own logical principles. Humans trust in a one base methodology, but the Betas build more of them as required. The Goo is a living mass which doesn't need anchoring to a specific place on the map. Of course the different factions require varying strategies, but the biggest differences can be seen in the bases and their logistics. The units are somewhat standardised; everybody has the same basic categories, and these are depressingly similar to one another. The Goo can at least break the pattern by climbing over mountains (they form an impenetrable barrier to Human and Beta forces).

Units do not rise in rank, and they don't have any special skills that can be activated separately. The only units with any real personality can only be found on the highest branches of the technology tree, where so called 'epic units' are waiting to be discovered. They are essentially super weapons that can be brought down as part of a well-planned task force, or when you're throwing everything you've got at your opponent. The faction which reaches these epic units first is clearly ahead of the pack, therefore getting them should be an important sub-goal. This is especially true with matches against other players.

There is a short single-player campaign, which surprisingly starts with us playing as the Beta. Every faction has only five missions in total, and it's over quite quickly. Clearly it's meant as an introduction to the mechanics, so that people can then start playing online matches against each other. Just be warned; the campaign can be difficult at times. Starting at an easy level is nothing to be ashamed of, as the AI is quite aggressive and ruthless in the way it attacks.

The short campaign means that the main focus is multiplayer, but that seems to have some balancing issues. We don't think that this necessarily has anything to do with the game itself, but it appears that players haven't fully grasped the strategies required for playing as the Grey Goo. Most are just playing with the Betas at this point, which is quite boring. Hopefully this'll change as the community gets more experience across all three factions.

We already mentioned that the cut scenes are stunning, but on the battlefield it isn't always user friendly when it comes to the visuals. The units look too much alike, and getting an efficient overview of the entire battlefield can be a bit tricky at times. You can alleviate the situation by grouping units efficiently, but in the bigger battles especially, mixups often cause the unnecessary loss of units. When it comes to audio it's a decent offering, and the songs and effects are as good here as they are in Blizzard's games. Even the Goo's weird wubwub-track fits the mood.

Grey Goo is a good addition to the RTS scene. It brings a modern edge to the genre, and it doesn't have much in the way of micromanagement; players can just focus on grand scale stuff. With that in mind, don't let the bad title have too much affect on your buying decision. For many of you this could be the RTS game that you have been waiting for. It could have had more depth, it could have tried more new ideas, but instead it delivers a satisfying and classic experience that could well end up providing fertile ground for further expansions and sequels.

Gamereactor UK
+
+ No micromanagement, stunning cutscenes, love that music score, offers a solid experience
-
- The single player campaign is too short, the units are hard to tell apart, lacks a little depth
is our network score. What's yours? The network score is the average of every country's score

"Grey Goo is a good addition to the RTS scene. It brings a modern edge to the genre."

Descent of the Shroud lands alongside Definitive Edition.

New publisher's VP of Games on the old-school RPG and more.

The aim is to reinvent real time strategy. 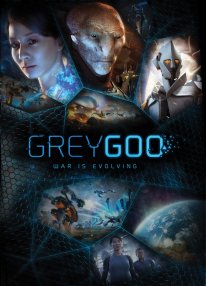