This isn't a trick question. Remember the arcade classic - two sticks and a ball that used the sport of tennis as a template?

For its time it was brilliant, fun and challenging. But lack of options and modes was a problem. Obviously forgivable, but to stand out in today's retail stores expectation a title most be more rammed with content than a ball-boy's pockets mid-Wimbledon final, and offer an interactive fantasy that's true to the reality (minus broken rackets).

As such, more developers are twinning themselves with motion controls, a setup that doesn't feel as precise as good old-fashioned controllers: which is where EA's latest comes in.

Grand Slam Tennis 2 holds true to the principles of sticks and shoulders, mapping player and racket control to the twin analogs to line up shots, as well as where and how you shoot. Shoulder buttons widen the options with lobs and drop shots. It's good honest, if ordinary control scheme, but it works well and offers plenty of strategy.

Pity then the opponents aren't as well practiced. Pressing forward on the stick at the right moment, I slam a harder stroke and force my opponent back. Once done, I toss in a drop ball. The score starts racking up in my favour. This continues, with little interruption, throughout the career mode.

Standard difficulty isn't all its cracked up to be, and the lack of concentration needed on the court has my mind starting to pick apart other aspects. Commentators repeat trivialities too often, load times are too long and the career's lack of variation makes it feel more chore than play.

But then I decide to yank up the difficulty from standard to professional. And I'm suddenly playing an all-new game.

Venus Williams serve is so implacably fierce that the ball - which had probably killed sister Serena if it'd contacted the frontal bone - whiz by at 145 km/h and gives her a serve-ace. Next shot I struggle to parry, and a heated battle ensues, with career points and honour at stake. I'm force to use the the full extent of the control options to even have a chance to stay in the game.

On this new plateau of precision it suddenly becomes important to utilize every chance I get to develop my own character through career. For each match, I run through a couple of challenges for those all-important points on my career stats.

The Challenges can be anything from winning in three or lobbying to keep the ball alive for at least ten beats before I finally smash it.
By participating in these training sessions you can also earn a few extra numbers to increase, for example, strength or endurance, essential for surviving Finals.

During those long sessions I'm reminded again of how sparse the commentary track are and I can not help wishing that there had been more budget spent here in capturing an extensive vocabulary for commentary than customisation options such as scores of shoes that look almost exactly alike.

But how much fun did I have playing, and how well has the sport been presented? In both cases EA has outperformed Sega's Virtua Tennis 4, and there is no doubt about which game you should choose if you get the tennis itch ahead of the many championships this year.

Gamereactor UK
+
clear and sharp game controls, loads of licenses, good multiplayer.
-
Repetitive structure and commentary.
is our network score. What's yours? The network score is the average of every country's score

"A heated battle ensues, with career points and honour at stake. I'm force to use the entire repertoire of shots to have even a chance of staying in the game."

Who's hitting the balls? 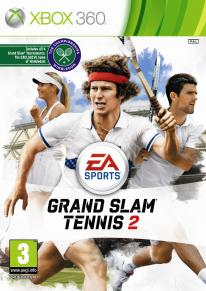