Smack! What is most likely the hardest fist in gaming hits the grinning hooligan right between the eyes. He sits down with a dazed look on his face. Haggar couldn't care less. His daughter Jessica has been kidnapped, and he grabs a hold of the swine and treats him to a suplex that would register as a seven on the Richter scale. Metro City just lost another hoodlum.

Final Fight was originally released back in Japanese arcades in 1989. A very challenging, beat 'em up similar to Double Dragon and Street of Rage. It's the usual story, a kidnapped lady needs rescuing and it's none other than the mayor's daughter this time around. As luck would have it Haggar is not just a man of justice, but one hell of a wrestler and he's not the kind of man who surrenders.

No way. He has other plans and grabs Jessica's boyfriend and martial artist Cody and his sparring partner Guy, a Ninjutsu ace. The only thing that remains now is kicking some ass and there is no shortage of scum begging for a beating. The big deal in Final Fight is the co-operative gameplay. And those of you who may recall the terrible Super Nintendo version are well advised to erase any such memories.

This is when co-operative gameplay really took off for the first time. Final Fight: Double Impact delivers a perfect arcade version sporting enormous sprites, amazing sound, and brutal brawls. But Capcom have not stopped at that, but they have aimed to give us as much of the 1980's arcade experience as possible. The default setting allows you to play Final Fight with an arcade cabinet framing the screen, while the game itself is played on a copy of an old arcade monitor with visible scan lines and phosphorous glow. It's really well done, and after trying out the game with the original pixels stretched out to fill the screen (wide screen and smoothing filter), I went back to the default mode that oozes of arcade nostalgia.

I open up a Cherry Coke and a bag of cheesy poofs, and suddenly I have a flashback to when my brother and I were hanging out down at the local pizza place putting our quarters into the Final Fight machine. I don't know how many coins we managed to put into the game in between getting thrown out of the place (since we were too young at the time).

Sweet memories. Final Fight has aged. There is no question about it. The tall sprites make the controls a bit imprecise and Haggar doesn't always do what I want him to. That said, and while Final Fight may not be all the latest rage in gaming, it still holds up well after more than 20 years. Even if you have not played it before, I highly recommend a purchase, and if you're an old fan you most likely don't need any convincing.

To make the deal even sweeter Capcom have thrown in Magic Sword with Final Fight: Double Impact. A fantasy themed action adventure that casts you as He-Man look-a-like. Heroes that looked like this were very common during the 80's, a blonde Prince Valiant haircut, a huge sword, and some kind of fancy armour.

Magic Sword also allows for co-operative play and lets you fight your way through a huge tower filled with creatures. By finding keys along the way you can release prisoners who serve as power-ups and help you until you free the next prisoner, who will then assist you. There are magic casting priests, valkyries with crossbows, and naturally ninjas. And even though Final Fight is a great game, I actually most of my time with Magic Sword, a game that has aged really well over the years.

Both Final Fight and Magic Sword supports co-op online. To further strengthen the old arcade vibe is the default setting is that you play online. So at any time during your session someone can jump in and play with you. Just the way it was when we played the game at the co-op cabinet back in the day.

Final Fight: Double Impact is well worth its price. At 800 Microsoft points or $10 on PSN, it doesn't matter that the games have been around for a couple of decades, at least not when they hold up so well even with today's standards and offer lots of entertainment both online and offline. If you haven't played a game like this before you owe it to yourself this piece of nostalgic pixel magic... Good times await you.

Final Fight and Magic Sword in one sweet package on PSN and XBLA...

Two punch pack out in April 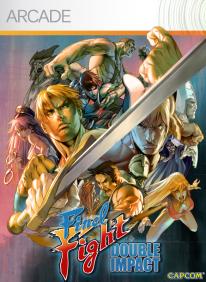