Fairy Tail is based on the anime and manga series of the same name. If you're a fan of the series, then we're happy to say that the characters you know and love are here in all their glory. For people not as au fait with the series, like me, there might be some reading required.

Fairy Tail captures the magic of the anime series and at times, especially during the cut scenes, it looks ripped straight off the telly. The story starts off with a battle that eases you into the turn-based combat system and introduces you to the main characters. The story then follows a group of characters who belong to a magical guild called Fairy Tail in the land of Fiore. Returning after several years, they find their old guild a little run down. This establishes the theme of rebuilding, reconnecting with people, and bringing your guild back to its former glory. In some ways, and in its looks during the playable areas, it reminded me of games like Atelier Lydie & Suelle: The Alchemists and the Mysterious Paintings (another title by developer Gust).

The main two characters are those from the anime: Natsu, a strong male with chiselled abs who wields fire magic and slays dragons (yes, there be dragons!). The other main character is Lucy - who wields spirit magic and is a scantily clad blonde. Right, I've got there, here's my first issue.

I'm not a prude, but I wasn't overly comfortable with the representation of many of the women in this game. I know that it leans heavily on the source material, but for me, well, the battle scenes made me especially uncomfortable. Let me give you an example, one character, Ezra, is a strong red-headed female warrior, and naturally, she wears a suit of armour. OK, I thought. However, when she performs special magic at the start, that outfit becomes more revealing. Then, early on there's a section where someone steals her package, and it turns out to be some underwear. I know that some people will like this and appreciate its brand of humour, but it fell short for me.

OK, back to the game. The story itself and the range of playable characters are great. You're not just limited to Lucy and Nora, but others such as Happy, a talking cat, make an appearance (if you watch the series, that comment will probably mean more to you than everyone else who hasn't). One thing I really liked was its storytelling. I knew from the start that this comes from a long-running series, but every time something from the lore was mentioned, a readable entry in the encyclopedia popped up. It was well written and informative and did fill in the blanks.

I also liked the way the characters grew and interacted. Early on, Lucy's father is revealed to be dead. The way she explains that they weren't close but she still feels sad was really well handled. The issue I had wasn't the story or its delivery, rather it's because all of the audio was Japanese, just with English subtitles. For me, that meant I found it difficult to connect with the characters due to the language barrier and the sheer amount of reading. This is weird because I don't have a problem with games such as Yakuza, which are all in Japanese as well. My best guess is that the huge amount backstory combined with the subtitles meant that I had to do a lot of on-screen reading and after a while that started to wear a bit thin. This is obviously a personal issue and won't be reflected in the score, but it needs flagging.

Ok, now onto the gameplay. The battles were probably my favourite part of the experience (other than the story and how that was delivered). They were turn-based and relied on a grid system, where different attacks could target a different number of squares. It was all fun and logical; you had the options of defending or attacking with your weapons and magic, which drains mana.

The magic attacks were particularly spectacular with a nice cutscene, although after using the same spell one too many times, it became a little repetitive. At least with the levelling up system, more spells became available over time. Beyond the magic, there was also a combo system where characters could connect and work together as part of a stream of attacks. It all worked together to make the combat a real highlight for me.

Another strong point was the land of Fiore. There was a city where your guild is based and it looks spectacular with a classic fantasy vibe. I loved exploring castles and all that jazz! It also looked like a well lived-in world with a vibrant atmosphere and lots of movement from the people who live there. Sometimes these NPCs can be interacted with and even help you with a quest.

So, all in all, Fairy Tail is a solid JRPG that offers some great storytelling, and I particularly enjoyed the strong emphasis on friendship and loyalty. I liked the rags to riches story and the process of returning the guild to its former glory, which in that sense reminded me so much of My Time At Portia, another game I've enjoyed in the last couple of years. Of course, the turn-based combat and magic systems were also real highlights. That said, I wanted an English dub, and I felt really uncomfortable with the representation of some of the female characters. If you're a fan of the series, you'll probably get more out of this than I did, but it's still a solid and entertaining JRPG experience.

Advertisements
Gamereactor UK
+
It looks good, great storytelling, nice use of encyclopaedia, engaging combat.
-
Some representation issues, no dub.
is our network score. What's yours? The network score is the average of every country's score

"A solid JRPG that offers some great storytelling, and I particularly enjoyed the strong emphasis on friendship and loyalty."

We'll be trying out the new JRPG on today's stream, but will we live happily ever after?

Fairy Tail won't launch until the end of July

Fans will have to wait a month longer for the game to land on PC, PS4, and Nintendo Switch.

Fairy Tail has been pushed back to June

Gust's dreamy RPG Fairy Tail has been delayed from its planned Q1 release to June of this year.

The JRPG is releasing in March next year, and the roster has just had a few more names added to the list.

Fairy Tail is launching on March 19 next year

Gust Studios and Koei Tecmo have revealed the launch date with a new trailer, showing some of the characters as well.

Keisuke Kikuchi would "very much like" a Fairy Tail sequel

The first isn't even out yet, but he considers the world expansive enough to justify another RPG. 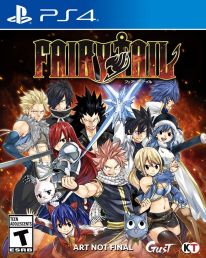