Dungeons 2 was recently released for PC, and it seems like a pretty decent offering for those who long to bring back the good old Dungeon Keeper days. Now it looks as if it's also heading to PS4, as ESRB lists Sony's console as one of the platforms for the game. So far this can only be seen as a rumor, as Kalypso or Realmforge hasn't said anything official on the matter.

Kalypso just released Tropico 4 on PS4, so the company has already a bit of an experience of porting strategy titles to consoles. So it certainly wouldn't be shocking if Dungeons 2 also made it out on Sony's console.

"Although its overall structure and quests may start to feel repetitive in its later stages, there is still much to be enjoyed."

Dungeons 2 is heading to PS4

We get down with our inner dungeon master.

Managing dungeons ain't an easy job, but someone has to do it.

Realmforge has expanded and tweaked the concept of Dungeons and come up with something that should please fans of Dungeon Keeper.

The spirit of Dungeon Keeper lives on in 2015. 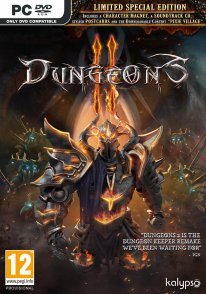