When it comes to uncomfortable garments exploding headbands is as bad as it gets. That's what fugitive Monkey is wearing and tech savvy Trip tries to get his assistance and keep him in line. This odd couple go on a road trip filled with angry mechs, overgrown skyscrapers and lots of jumps.

It's Monkey, and in turn you, who is stuck with the bulk of the job in Enslaved: Odyssey to the West. The head band he wears does come equipped with a useful walkie talkie, but it will kill Monkey if Trip feels like it, or if she happens to die. Enough motivation to try and keep Trip alive as we make our way through a devastated New York where nature has taken back what it once lost.

Andy Serkis, perhaps best known for his performances of Gollum and King Kong, has lent his voice and motions to Monkey. As expected the result is wonderful as Monkey possesses both gracious movements and a face full of expression. This is especially apparent in the cut scenes where we get closer to the two characters, and even if the story penned by Alex Garland (The Beach, 28 Days Later) could have done with more nuance at least it's well told.

Monkey's main duties lie in jumping and fighting. During combat Monkey's stick is put to good use against busy bots armed to their metal teeth. You can switch things up with normal hits, charged up power swings and insane focus attacks where our hero goes Yoda on their metal asses. The enemies range from simple surveillance mechs to gigantic, animal-like boss bots. Weak spots are detected with Trip's handy dragon fly scanner.

And turning robots into scrap metal rocks - the animations are very fluid and the heritage from Heavenly Sword is easy to spot. Monkey can also perform special takedowns on certain mechs. To watch him jump up on the metal bastards, rip their railguns off and turn them around is pure delight. These finishing moves are highlighted with special camera angles, fitting slow motion and a roaring Monkey.

Apart from swinging his wand Monkey also has ranged projectile attacks of plasma or stun variations. Annoying mechs equppied with shields take a burst of each to seize their bullet spraying activities.

Enslaved: Odyssey to the West is not all fighting and explosions. The road ahead is often blocked, and Monkey must make his way across ledges, vines, bars and other things that protrude from the general terrain (highlighted by a far from subtle blinking). Monkey will live up to his name as he swings and climbs his way westward. And even if it looks dangerous you will seldom fall down. Everything seems as if on rails, and if you're not a fan of Uncharted 2-like automation consider this a fair warning.

Co-operation is also a key to progression and you can give Trip different commands with the left bumper. You can ask her to stop, follow, or activate holograms that divert the mechs. Trip oftens reverts to "damsel in distress" mode and she has to be carried or thrown across distances only Monkey can traverse. It's always nice with a travelling companion and when pig-like Pigsy comes along, the plot thickens.

Enslaved also offers a few puzzles, but they are fairly simple and don't take up much of your time. Monkey and Trip must for instance raise or lower bridges or platforms and you do this by issuing Trip commands. I wouldn't have had anything against sacrificing a few climbing sections for more puzzles, but it feels fairly balanced. My slow wits took enough time figuring out how to work a submarine, and had it been any harder I would have yelled out in frustration.

There is a lot of variation and Enslaved is at its most entertaining when Monkey puts his hoverboard "Cloud" to use. On this speedy means of transportation you make your way across bodies of water, over bogs, fight bosses, and go through chase sequence with your eyes locked on the blue boosters spread out on the course. Cloud adds a lot of variation to the gameplay and compensates the fact that Monkey can't jump.

Your journey will take you through wet lands, mine fields, hangars, and across bridges and from a design perspective it's both varied and coherent. However, there is a layer of blurriness spread across all of this and you will also find some graphical glitches. Apart from that it's a unique and picturesque experience, especially when Monkey is dangling from some ledge like a Persian prince with the sun spreading its beams from the background.

It quickly becomes apparent that that a stronger bond between Monkey and Trip is created than the one Monkey is forcedly carrying on his head and certain parts of the story is a bit predictable. But there are moments with great atmosphere and it is a beautifully visualised story. Both Andy Serkis and the actress responsible for Trip's voice do an excellent job and in combination with the stellar animations it adds to the credibility. The eyes in particular are impressive.

Action adventures have gotten a bit overshadowed by pure shooters and therefore Enslaved: Odyssey to the West comes as a more than welcome breath of fresh air. With several thoroughly entertaining levels and high pace (not too mention the most memorable ending of 2010), Ninja Theory has managed to put together one of 2010 big surprises. To sum it all up Enslaved: Odyssey to the West is a cosy adventure in an original and fresh world. Ninja Theory mix intensive action with more mellow sections and the final result is captivating.

REVIEW. Written by Jonas Elfving (Gamereactor Sweden) on the 4th of October 2010 at 10

Enslaved makes its way onto PC

Odyssey to the West finally makes the leap from consoles.

No Enslaved sequel on horizon

Namco not done with Enslaved

More monkey tricks in the future?

Not ruled out despite disappointing sales 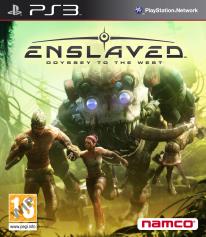