If you were to walk into a bar in Japan and tell people that you've never played a Dragon Quest-game, you'd probably see a bunch of shocked faces. They might even wonder what's wrong with you. After all, in Japan Dragon Quest is a pop-cultural phenomenon almost as big as Pokémon, The Beatles or Harry Potter and together with a couple of Nintendo titles the series is one of the best-selling ones ever.

With that status in mind, it's not hard to see where the ninth regular Dragon Quest-game is coming from. Even if the games have never been any technical wonders, it was a big surprise when the ninth installment was announced for Nintendo DS instead of a stationary console. Playstation 3 would have been the obvious choice, but also the Wii would have made perfect sense.

But that's not what Yuji Horii, the original creator behind all the games, had in mind. No, inspired by the success that Monster Hunter had seen, Dragon Quest IX: Sentinels of the Starry Skies was going to be a game where co-operation and item-gathering were the two main goals. Thus a hand-held device would be better, since you can carry it around with you and interact with other players - comforted by the fact that statistically every thirtieth person you meet owns the game. The streets of Tokyo and Osaka becomes your general-chat and the whole world becomes your MMO.

I don't live in Japan, and that's where my problems start. Instead I have to approach Dragon Quest IX as a regular roleplaying game. Compared to the previous games I get to create my character myself, which is hardly a problem and soon my blond warrior is standing there. Or, well, hovering. With a halo.

In Dragon Quest IX's world there are beings known as Celestrians, a kind of angels. They are more or less a hybrid between the Christian version of angels and the Valkyrias from Norse Mythology. They move unseen amongst the mortal humans, listen to their prayers and help confused souls reach the afterlife. As a reward they are granted "benevolessence", a power the Celestrians gather to make the world tree Yggdrasil grow which in turn will lead to them their own paradise. But of course something goes wrong and the hero ends up powerless in the mortal realm, where he or she will have to try to reclaim his/her former glory.

Cozy villages in green forests? Check. Cute monsters with funny names? Check. Castles built in grey stone with armored guards? Check. Magic swords and cursing trolls? Check. Save points only in cities, turn-based combat, a lot of menus? Check, check, check. The height of innovation comes in the form of being able to evade monsters on the map.

In that is also a certain charm, for at the same time the fun of exploration and the challenge that other RPGs have lost remains. Dragon Quest IX is old school. No arrows telling you where to go, you get to happily explore the world and talk to everyone until they say something new or give you a tip where to go next. It can be frustrating, absolutely, but it's also very satisfying when you figure out what to do or being able to explore a temple filled with monsters a long time before you're actually supposed to go there.

Dragon Quest IX allows you to create the members of your party in the same way you create your main character. After putting together a team of a warrior, a bard, a mage and a priest I could start adventuring for real. The character advancement is quite complex, where every class has a set of skills of its own - but if you're not satisfied you can always change class, while still retaining some of your old skills. That way you can create a paladin with a bit of thief or martial artist in him. Or whatever combo works best for you.

There's also a ton of equipment to find, everything from huge armors to boxer shorts and thongs. Dragon Quest IX doesn't take itself very seriously and character designer Akira Toriyama's typical humor shines through - I'm usually allergic to his design but here is incredibly cute and cozy. The humor is in general a lot of fun, with well-written dialogue (even if your character, as usual, can't talk).

I also like how the game looks, but it's quite clear that the Nintendo DS is about to hit its limit when it comes to graphics. A lot of compromises have been made so that the game is playable and background characters are only paper-thin cut-outs to not overload the polygon-engine. But important characters look great, and everything you wear is clearly visible - which makes the gathering of items even more fun.

Dragon Quest IX is a huge game, you can count on about 40 hours to get through it and perhaps even more if you consider that you can keep on playing after the final boss has finally been killed. But here we comes back to the limitation of the game, since a lot of it depends on having other people around you. You can play together with three friends, but only ad-hoc between four DS-units. There's a function where you can close your DS and let the game search for other players in your vicinity, which will make their character turn up in your game, but that doesn't work nearly as well up in my parts of northern Sweden as it does on the Tokyo subway.

Because of this, I haven't been able to take advantage of the more innovative features, features that were the reason to release Dragon Quest IX on Nintendo DS in the first place. To design a game according to its status as a cultural phenomenon doesn't work nearly as well in other countries. But what we still get is an excellent and addictive roleplaying game, one of the best on the format and one of the best Japanese RPG in ages. If it had been graced with the possibility to play online, this would have been a masterpiece. Now it's "only" a great game.

Gamereactor UK
+
Great freedom, charming dialogue, a ton of challenges, addictive gathering
-
Built for online and multiplayer modes that you might never use
is our network score. What's yours? The network score is the average of every country's score

Petter Mårtensson
Dragon Quest IX: Sentinels of the Starry Skies is cute. It's almost disgustingly cute. Yet, for some reason, I've managed to buy into it and been transfixed by my Celestrian and his rag-tag army of martial artists and warriors wearing pink dresses. It's terribly addictive, the character customization is great and I just have to live with that the only player character that has moved into my inn is my girlfriend's. 8/10

Mikael has played a super-traditional, yet amazingly well-made Japanese roleplaying game that includes a brilliant multiplayer-mode. If you live in the right place... 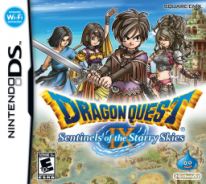 Dragon Quest: The Chapters of the Chosen