DMC reinvigorates Dante's wardrobe, and the result is far from what you feared, and not so different as you'd believe. After plenty of fractious pairings with third-party developers, Capcom's found harmony in its partnership with Ninja Theory.

The strengths of each are beneficial to the other. The Cambridge outfit's performance capture and eye for evocative world-building makes cast and locations continually interesting. The creator of Devil May Cry is still heavily felt in the game's combat: precise, complex.

That said, initial plunge through the game's ten hour plus time frame, carved out across twenty missions, is, for the most, satisfying in itself. Plenty to juggle, much to enjoy. And even for a template that owes much to the past, a lot to admire.

A to B by way of platforming and combat, the game running close to even on the time given to each, but it's balance that feels right.

Bar one exception, fighting's either against enemy hordes or gigantic bosses. You begin with a pair of guns, a mammoth sword and a small number of combination attacks. Your choices escalate quickly, upgrade tokens letting you tailor your favoured combat style through chunky ability and weapon skill trees, with additional arsenal gradually unlocked and adding to your options. Weapon unlocks are staggered across the ten hours, meaning surprises land into your hand even late on into the adventure.

The D-Pad's used to switch between all; two angelic weapons to the left, a pair of demonic variants mapped on the right. Hold the left or right trigger during combat to replace your sword Rebellion with those selected. Tapping Up will cycle through the (eventual) three gun types.

Certain weapons work better on certain enemy types, and some upgraded moves stagger enemies mid-charge. The full arsenal's a good mix of long and short range attacks. Switching between them mid-flow is flawless, and transferring is surprisingly easy, and enjoyable, to accustom to on the fly. Needed as well, to get the best out of the battlefield and the scoring system, with higher rankings tied to continual combo variety. 'Stylish' combat still core to the experience.

Boss fights are one of the weaker elements that get a pass first time round thanks to visually superb designs and varied premises. A dive into a news network demon AI, that has instances of you duking it out within mock news footage, as well as a level-long dance club clash with unique fighting arenas, are both game highlights. But attack patterns are easy to learn and avoid - a problem each climatic clash suffers from.

Respite from the finger-bleed button taps comes with the platforming sections. Early on you unlock Angel Lift and Demon Pull. In combat they're used to pull you to enemies or them to you. Similar mechanics when it comes to platforms, pulling you towards ledges or yanking platforms closer to you, and intermixing either with standard jumps or air dashes to travel across numerous floating areas that are so prevalent in the demon realm of Limbo.

A lot of each level's secrets are off the beaten track. Lost souls, secret rooms and the keys to unlock them become increasingly tucked out of the way For those stages that are characterised by flocks of floating platforms, dual, or even multiple pathways interweave towards your goal. Personally it took some time before we felt fully comfortable with these manoeuvres, surety in air dash distance and direction in particular - leading us to leave exploration, and its trial and error, until a return trip.

Camera work can always be a sensitive issue in action adventures. Ninja Theory's take here is extremely well designed, keeping the hordes in frame. There was the ever-so occasional need to nudge it into a pan, but nothing that felt disruptive to the gameplay.

Surprisingly the lock-on feature (a click of LS) isn't mentioned in the tutorial text boxes that pop up in the game's opening section, but then the game always seemed to know what we wanted to aim the next attack at.

It's a game made for repeated plays, and is good enough to warrant a re-run. From the first mission there are areas and secrets cut off until the right weaponry's unlocked. And while the linearity may start to weary come the platforming second time through, the combat, with a difficulty adjust, won't.

Game+ options introduce difficulty settings such as latter-game enemy types dropped in from the get-go, to one-hit deaths for Dante. All remix and refresh. Discoverable secret rooms, the keys to which are hidden as well, each offer a challenge-based time sink with different approaches to formula (such as time attack race courses through levels, or beating enemy groups without a single repeated attack) and are selectable in a separate mode once unlocked.

That's enough to chew on even without online Leaderboards, and those operate as they should: enforcing replays to better Friend Lists, even as Worldwide rankings show how far you're outstripped by the globe's best and give you something to aim for.

The game only loses steam come its concluding stages, a final stronghold assault lacking the ingenuity or visual motifs of the past ten hours of locations. A final one-on-one starts strong by syphoning emotional fallout from the main story arc but muddles the decisiveness of a climatic finisher by poor signposting (to spare frustration come the time, two words: Devil Trigger).

Our principal cast are much better than the story they're placed in. Its broad strokes - news corporations and advertising agencies truly are the devil's work - do well as a central premise, but lack detail and the deep bite of repercussion as we toss a sword-shaped spanner into the world order. You're left wishing for cleverer solutions or twists on the story.

That's true of Dante as well, though Ninja Theory's re-imagining of the demon hunter - punk rock Tyler Durden without direction or goal - is so much more than a one-dimensional poster boy for disaffected youth. That he gives enough of a shit for his fellow man makes for watchable interactions with the other leads of the title, but there's less fleshing out of his reaffirmation to do right by those he's protecting. What there is is credible, but for a game with heavy investment in performance capture, you'd wish the studio had dared choose lingering shots on face rather than flashback to let inner turmoil convey emotional conflict rather than the multiple (admittedly gorgeous) paintings and graffiti. Who'd have thought we'd want to see more of the soul behind the cocky demon hunter?

The interesting side-effect of this is that the classic one-liners feel somewhat at odds with the personality being etched out elsewhere. Compare his comforting of someone in mortal danger to flipping the bird at the city's news anchor-turned-demon ("put a spin on this"). The two don't sit so comfortably together.

Broad strokes. There's a lot to get our teeth into if a sequel's forthcoming. And while we're at a loss as to how it could build on what's here in terms of combat or boss fights, the characters and world are something we want to see more of.

The duality of the real world and Limbo - the nightmarish, twisted version of our own Dante's pulled into to fight demons - is vividly portrayed. Limbo's rich in colour, and the story excuse for those invisible walls that appear during fights (the city itself is fighting Dante) allows Ninja Theory to render each battle cue with an environmental violence that never lessens in its impact.The music - a tag-team of atmospheric edginess from Noisia and pounding industrial from Combichrist is a knock-out punch that delivers on the ears and fits perfectly with the on-screen action.

This is a highly polished adventure and one of the ever-rarer experiences tailored for the single player, with multiplayer competitive, by way of scoreboards, a subtle extra that can accentuate the game's life-span rather than defining it.

With five years since the last series entry, three since Bayonetta and with the latest Ninja Gaiden disappointing, DMC's potential prominence in the hack and slash genre was its to lose. DMC smashes misgivings over outsourcing the franchise and proves a fine entry for both companies.

You can continue to batter fingers on keyboards to complain about change. But truthfully, you'd be much better making those digits bleed on controller buttons and embrace the new. Otherwise you're missing the debut of a restored classic.

Offline
Darcking on the 16th of February 2013 at 11:27.
There is no denying that DMC is one of the greatest reboots known to man, and yes this is another reason the Devil May Cry series should be in the top contenders for being great games of last, present and future gaming generations. 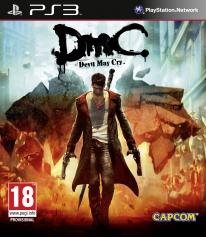