Size aside, there's little difference between this and last autumn's Dead or Alive 5 (which you can read about here) is minimal.

Done? Good. The combat system, balance and all the moves are virtually untouched in Team Ninja's portable conversion. There's nothing negative about this: Dead or Alive 5 was a good fighting game, and a portable version makes sense, given the minute-long battles and lack of narrative, it means you can dip in and out easily.

So what does that Plus sign signify? It means in part, new training modes. Tutorial consists of a number of lessons and objectives designed to demonstrate the combat system, while Combo Challenge teaches players how to tie together different moves. The only thing missing is the ability to break down all the movements so that the timing can be analysed more closely.

Elsewhere, Plus introduces the Touch Fight, letting you tap and pinch the touchscreen to initiate moves. Game Mode is an interesting diversion, forcing you to fight from a first-person perspective. Shame Team Ninja haven't tried to include a PvP sub-mode to this.

However, the list of features missing is what surprises the most. It's no longer possible to play 2 on 2, a big disappointment given Tag Battle one of the genre's finest additions, nor can you upload saved videos to YouTube. Yet those subtractions doesn't mean Plus is a slimmed down conversion either.

Team Ninja has focused on the most important thing when building Dead or Alive 5: portable gameplay. Sure Vita's hardly as ergonomic on the hands as a DualShock 3 is, but the unit's build and buttons work very well for fighting games. This makes Dead or Alive 5 Plus feel like the console versions, while the display is as silky smooth as the PS3 version. Character models are impressive, and load times are admirably short.

As a result, the rest of the graphics have taken a few knocks. The backgrounds are plagued with low-res textures, but what's important is the fluency of gameplay has been successfully adapted. You can play against PS3 owners over the net, and that works splendidly. Usually, you can count on a noticeably inferior version for the portable format, but in this case the two versions have more or less identical gameplay.

PlayStation 3 owners who own both versions can transfer both saves and downloadable content to their PlayStation Vita (so no worry about shelling out on the bikini costumes again). At the same time it feels a little petty to not include all of these costumes for free, because much of the material has been available on the PlayStation Network since last fall.

Those who are already familiar with the console version of the game will notice that all the characters, tracks and gravity levels are unlocked from the start in Dead or Alive 5 Plus. This is a good thing because any returning fighters won't need to unlock everything again six months later - but as a result, the game's story mode has become even less interesting. As if that were not enough, Team Ninja also removed the optional challenges of Game Mode.

One can not call Dead or Alive 5 Plus the most most comprehensive version of Team Ninja's fighting game. Replay value is not as high as in the console versions, and those who already own the game on Xbox 360 or PlayStation 3 are not likely to find anything of value in addition to being able to kick some ass on the way to work. That aside, the conversion's still a stellar one. If you've always dreamed of carrying these busty ladies in your pocket, you know where to turn.

Dead or Alive 5 Plus

It's Dead or Alive as you know it, except this time it fits in your pocket.

"After having spent the previous month with Tekken Tag Tournament 2 it becomes obvious how dated Dead or Alive 5 feels."

Tecmo Koei and Team Ninja are celebrating this milestone with a surprise.

Dead or Alive 5 Plus

Dead or Alive 5 on PS Vita 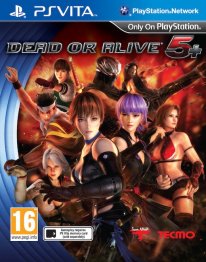