It is somewhat strange that there more action games sporting jetpacks, since it is so much fun to defy gravity and rocket your way through the skies. Rare's classic Jeptac and Cinemawares' Rocket Ranger are two of the few example out there, but we must not forget that both Red Faction: Guerrilla and Warhawk offered up some jetpack action. Capcom's Dark Void is an attempt to fill this... uhm, void. Developed by Airtight Games, founded by members of the Crimson Skies team, they feel like an obvious choice to rip off the Rocketeer concept. They know how to make aerial combat games, and feel right at home with the time period.

Dark Void is set in 1938. The world stands on the brink of war, but doesn't know it. Enter Will, an old school gentleman, clean shaven, dressed up in leather (very manly at the time), and a pilot. He signs up for a simple delivery mission, unaware that all planes must crash in video games. To make things even worse he flies into the Bermuda triangle. The plane crashes. Will and Eva, his client who is also his former girlfriend, discover that they have crashed into an entirely different world...

The story won't win any awards for originality. And the same goes for the voice acting where Airtight have chosen to go with Nolan "Uncharted" North and put him in the same kind of role. To make matters worse he ends up in the same kind of situations. Dark Void starts off as an embarrassing, pale clone of the mechanics that made Gears of War popular; duck behind cover and shoot at whatever peaks out.

After a while Will runs into a certain Nicola Tesla. Why he is doing in this strange place is unclear to start with, and in comparison to Ezio's scientist friend Leonardo da Vinci he comes across as a budget alternative. But as he offers Will a jetpack, it's easy to accept his horribly faked accent.

With a piece of experimental rocket science strapped to Will's back Dark Void quickly grows on me. In its initial configuration it allows me to make double jumps and navigate vertical passages. The vertical combat has been hyped up, but come across one of the weakest points in the game. In practice it works just like any Gears of War style battle, cling to a platform, peak out and shoot or grab an enemy on the other side. The only difference is that there is no free movement and that you either have to hang on to a platform or stand on it. Poor animations and Will's "Spider-Man powers" fail to create the sensation that you are fighting vertically up a wall. Sure, it looks cool to boost yourself upwards, grab an enemy's throat and yank him into an abyss, but only the first three times. After witnessing the exact same animation 132 times over it just doesn't do much for me.

Speaking of the enemies. Dark Void makes the mistake of offering up an army of robots as enemies and unless we are talking about robots such as Optimus Prime or T-800 that is not a great choice. Ugly, shimmering blue robots who seem like a mix between the robots in Mass Effect and those in I, Robot glide around the environments and act stupid, while they utter contrived lines in perfect English. They don't react when shot at all, which makes the guns feel even less powerful than they already do. They are mostly just annoying and the best way of handling them is to run at them and take them out in close combat. I get Star Wars: Episode I vibes...

Dark Void uses Epic's Unreal Engine 3 and is adequate from a technical point of view. The surroundings are enormous to enable flight, but there isn't much detail. With the exception of cutscenes and the odd instance of slowdowns it runs smoothly. However, the design is dull throughout. Humans who are neither realistic nor caricatures, environments that look like recycled Stargate sets, and mechanical beings that look like a mix of Halo and Bionic Commando.

It's a shame that the game feels so uninvolved and shaky, as there are positives as well. When flying is truly used to provide the player with options in combat is feels great. To swoop down from a hundred yards to engage a four legged robot at close range is awesome. To hijack an enemy craft shoot down other ships is also great. There are many instances of something as simple as base jumping, where you throw yourself off a cliff and activate your jetpack half a click later. In general the aerial provides the player with a lot of options and it shows us what the game could have been.

But the basic components just don't measure up. The gunplay is competent, but never gets really intense. The aerial bits are fun, but are constantly interrupted by the need to land and engage enemies. To top it off something as fundamental as the camera is just awful. It's locked above Will's shoulder and it always feels as though he is blocking my view. The field of vision is also very narrow even with widescreen. The camera also messes up when I'm attempting short and precise platform jumps, and the jetpack had to bail me out on more than one occasion.

The problem is the same old usual, when a studio well versed in flight games insists on including ground sequences. Factor 5, may they rest in peace, had the same problems in Star Wars Rogue Squadron III: Rebel Strike and Lair. Running and gunning must be of the same class as the best in that category or it just turns into an annoyance. If they had turned Will into a cocky flying machine and just focused on polishing the aerial parts the end result would have been better. Now we end up with an average game where the highlights are outnumbered by the flaws.

You can compare it to another Capcom game Bionic Commando, where one gimmick was the foundation of the entire game. But I enjoyed Bionic Commando much more than this. I would rather compare it to Wet, another attempt by a small studio to make something very ambitious, without the proper resources or talent. If you are desperate for some jetpack action this might do, but there are a lot better action experiences out there.

Survivor Missions out next week

Is it as bad as some claim?

From the PC version of the game

Who's watching the Watchers?

We talk to Airtight Games

Everything is easier with a jetpack 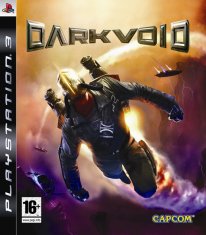