For quite some time, we've been praising Visceral Games and EA for deciding to base a game on The Divine Comedy. With all IPs more or less taken, looking back at a bizarre 14th century poem makes sense in one way. But still, it's The Divine Comedy. It's a literature classic. What's next, The Old Man And The Sea?

There's something special about Christianity a couple of hundred years ago. While theological arguments were ripe, and could potentially lead to war, everyone more or less agreed that if you sinned and didn't fear God, you'd end up in Hell. And while modern versions of the Christian Hell tend to take the whole "suffer for eternity"-deal a bit less literal, back in Dante's day it was all about burning and prodding and torture and all that good stuff. The Divine Comedy, the tale about Dante's journey through Hell (and later Heaven), is all about flaming tombs, sinners frozen in ice and rivers of boiling blood. Really sweet.

Let's just get this out there straight enough - Dante's Inferno, the game edition, is not sweet in any way. It's not cute, Visceral have not cut any corners when translating The Divine Comedy into their God of War-inspired action romp. Dante himself is probably smiling in his grave, the bishops of old would probably point to this game and proclaim "that's exactly what it's like!". While the industry as a whole eyes legislators and moral preachers, who would prefer Tetris to be the most violent franchise available, with a certain amount of fear, Visceral brings one of the most explicit games in a long time.

When trying to explain the design and artwork of Dante's Inferno, it's hard not to use the f-word. Visceral has gone all out from the start. Dante, the Templar and protagonist of the game, returns home to find his home broken into, his beloved Beatrice dead and his father murdered. That scene, in beautiful CGI, is probably the calmest of the whole game. From there, it's a roller coaster through Hell as Dante chases after Beatrice who, for some reason, has been damned.

Did I mentioned that he beat up Death himself before leaving the Holy Land? Oh, sorry. He did.

That's the kind of game Dante's Inferno is. It's hard not to gasp at times, even early in the game when a giant burning cross almost crushes you, or when you realize it's not water coming out of that drainpipe but a stream of human bodies. The different circles of Hell, nine in total, all look and feel different and give a disturbing insight into the state of the god-fearing citizens of the 14th century - and the psychological state of the game designers, I suppose. The circle of Lust is all about genitals and flesh, Gluttony is a twisted digestive system (including, I believe, the colon) and in the circle of Greed the poor sinners swim in lakes of boiling gold.

In all, the design work of Dante's Inferno is admirable and consistent in its madness. Anything else would have been a letdown, if you're going to do Hell you better do it right. The sound effects and music help build up the mood of hopelessness and it's hard not to contemplate how eternal damnation would actually feel, should we be unlucky enough to end up in this version of Hell in the future.

Of course, there's more to it than design - it's also a game, after all. And basically, Dante's Inferno is a God of War-clone. It's button-mashing, combo-building, magic throwing and semi-QTE gameplay. Using Death's scythe, Dante tears through the denizens of Hell, including low-level damned, demons and heretics. The gameplay is solid enough, it's does not really live up to the dancing beauty of the game that is its main inspiration, but it doesn't disappoint either. The camera works pretty well, even though you can't move it around, and most of the time you have a good view of the action. I say most of the time, because sometimes it zooms in a bit too much which makes it hard to evade a demon's sudden charge from out of sight.

The action never lets up, so solid controls are the Alpha and the Omega of a game like this (see what I did there?). The moments where you get a break are few and far between, and those are usually spent searching the environments for collectibles. Otherwise it's fight! Boss fight! Fight again! Am I done...oh, no, more demons just spawned! Fight! At times you get a quick QTE, usually related to climbing on top of a giant Hell-beast to kill its master and gain control of it yourself. Then there's the whole swinging across cliff faces and puzzle solving, all basic stuff. The puzzles do include some really well made ones, and it's not all moving boxes around. Puzzles in an action game that force you to think (although not for long)? Scary stuff.

It's hardly perfect though. Except for the rare camera issues, Dante's Inferno can be frustrating for other reasons. It's hard to know which cliffs you can fall from and which have an invisible wall installed. Sometimes you drop out of view and die instantly, even though you don't know why. Some puzzles also kill you instantly, and while the game is quite reasonable when it comes to check points, it can be annoying to do a certain puzzle or part over and over again. The jumping can be a bit odd at times and it can be hard to get Dante where you want him, especially when you have to make a precision jump. The game is also really good at reusing enemies, which can break immersion - like when Gluttony and Lust demons suddenly fight side by side.

The worst is the bugs, though, that have managed to find their way to the released version of the game. In these days of patching console games they will hopefully be fixed at some point, but falling out of the geometry or being grabbed by an enemy who then starts to spin his way through the background, killing you instantly (which happened to me quite early in the game), is not really acceptable in this day and age.

In all, Dante's Inferno is exactly what I hoped for it to be. Perhaps it's my old interest in religion and religious imagery that is talking here (not my love for 14th century poetry, which is more or less non-existent), but I adore Visceral Games' vision of Hell. With some of the most intense action in a long time, and some of the coolest bosses in many years, Dante's Inferno offers an intense experience to all the people who are waiting for God of War III. It's a good action game with some great design, even though it might be a bit too much for more sensitive people. Killing unbaptized babies, even though they have blades for arms, is not for everyone. You have been warned.

Even though I like Dante's Inferno, I do pray that the executives at EA don't decide that they want a sequel - Heaven, which Dante ends up in after his journey through Hell and Purgatory in the original book, will probably not be that exciting.

REVIEW. Written by Petter Mårtensson on the 3rd of February 2010 at 11

We've descended into the Blind World where the sun is silent to find out if Hell is from here to eternity or not.

The Xbox 360 version of Dante's Inferno will also be added to EA Access.

EA ditched the actor about to star in The Force Awakens.

The Trials of St. Lucia

Create your own action-packed arenas for the world to play? Sounds like a good idea, no? Sadly, this expansion for Dante's Inferno is a pretty broken experience...

Learn how to torment your friends

We talk about Visceral's latest game 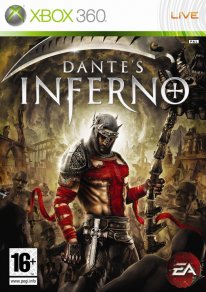 Clash of the Titans

El Shaddai: Ascension of the Metatron