To scare someone is a difficult art form to master. Partly because the audience, myself included, is very picky and find flaws in most everything that tries to scare us. The tactics may be to crude and gory resulting in an outright comedy, the pacing may be off, either too slow or too fast, and it's easy to find flaws with cheap tricks such as sudden sounds or cuts. Whatever may be the case with Deep Silver's Cursed Mountain it never managed to scare me.

The basic concept is solid. Handsomely bearded mountaineer Eric Simmons runs around in the Himalayas searching for his lost brother Frank, who managed to enrage a mountain goddess by stealing an artefact. There are ghostlike monks, Tibetan lore, ghost villages and truckloads of incense around every corner. Eric fights ghosts, the harsh climate, and often against his fleeing sanity.

The missions often revolve around collecting various objects, parts of emblems or upgrades for your ice axe, and on route you will encounter ghosts every now and then. Early on Eric stumbles on an axe that turns out to be the perfect cure for undead hoodlums craving human flesh. Pull the z-button and Eric sees a grimy ghost dimension where he holds the axe like a wand. A few rounds of axe projectiles and the beings display a red spot on their torsos that you can home in on with the a-button and put an end to their misery with a few gestures.

The gestures... It's hard to find any connection to the gestures I perform and the action that takes place on screen. And that's not the only problem. To sit quietly and calmly in your couch just to have to explode in a flurry of wild gestures really kills of the atmosphere. And when the game refuses to acknowledge my diagonal swipes the ghost has to be worked on with the axe again and my frustration levels rise fast. And that takes us to the first boss of the game...

My frustration reaches new levels as I enter into combat goth inspired eagle whose three healing towers need to be deactivated with precise upward movements of the Wiimote. I'm dead certain that's what I'm doing, but nothing happens and the boss snatches an inch of my health bar. I run off to the closest incense dispenser, but as the healing takes a little time the boss catches up with me and hurts me just as fast as I heal up. I'm tempted at sending the disc to someone I really hate at this point.

To be scary you have to provide an element of surprise and unpredictability and apart from a few half a second long scary effects Cursed Mountain seldom achieves this. In one part of the game I'm asked to collect three pieces of a medallion in a run down village. I enter the house as instruct and find nothing on the bottom floor, I ascend the stairs to find what I'm looking for, and even as I put in my bag I release a ghost will be waiting for me downstairs. No amount of blinking lights will make me jump out of the couch.

Sound is key to making something scary and this is the best part of Cursed Mountain. A nice and well balanced soundscape does its best to make the rest of the game scarier. There are voices in the background, the music dynamically changes in areas where there are more ghosts and there are little details like distant laughter and the sound of wind chimes.

From a visual point of view Cursed Mountain is what you can expect from a game on the Nintendo Wii that attempts a realistic look. Polygon challenged characters, blurry cardboard textures for surroundings, and lighting that certain Gamecube titles outperforms. There are some nice visual touches such as the cut scenes and the draw distance is fairly good considering the limitations of the console. But its hard to ignore all the compromises that had to be made and climbing up an ice wall in Cursed Mountain after just doing the same thing in Call of Duty: Modern Warfare 2 reveals just how wide the gap is.

It is obvious that Deep Silver have glanced at the recipe that made Resident Evil successful. Some might even call certain homages paid to Resident Evil outright theft. The wooden barrels you break with the axe reveal bonus items highlighted by vertical pillars of light in various colours. When we pick these items up a text box with information along the lines of "It's a rusty old key" appears. There is rotten food and fly covered carcasses for Eric to take a closer look at, often with some comment on the foul smell. Even the font and the health meter appear as if taken straight out of Capcom's horror series.

I really wanted to enjoy Cursed Mountain. All the right intentions and ambitions are there. As the Resident Evil series has become more action oriented, a game like this comes around gives you an ice axe and tries to scare the shit out of you. But ultimately it fails. There are just too many valleys and not enough peaks in this game.

Gamereactor UK
+
Innovative concept, good sound and music.
-
Frustrating combats, not scary, fails to immerse.
is our network score. What's yours? The network score is the average of every country's score

REVIEW. Written by Jonas Elfving on the 8th of September 2009 at 14

Jonas Elfving went to the Himalayas to wave his Wiimote at a bunch of ghosts.

Economy to blame once more 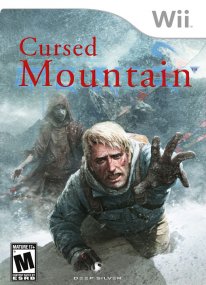