That said, it's also hugely indicative of how far games have come in the eleven years since the original Panzer games bowed out on the original Xbox.

In today's shooter market, on-rails is limited to the brief diversion during the action (such as Gears of War's mine carts, or the AC-130 Gunship in Modern Warfare), to add a little variation to the gunplay. The modern market's strayed from making such mechanics core to the experience; on-rail shooters have evaporated as gaming's embraced the freedom and variety of the open world.

Illusion or not, the ability to choose how to approach and engage with objectives gives a greater degree of player agency. Returning to the classic tropes of a genre may tug on nostalgia, but the differences -evolutions - forged in the intervening years weigh heavily on the mind as you play. You feel the constraint of limitations all the more - and more so because their design here isn't perfect. On an eighth-generation machine, the spectacle can't hide how rusted those rails have become.

You play as a dragon rider on the planet Draco. A devastating disease known as 'crimsonscale' has spread across the world causing the decimation of the human population. Having survived your bout of infection you are better able to bond with winged beasts. Due to your unique abilities you are recruited to save the world whilst riding on the back of a dragon. To do this, you have to destroy everything in your path. Simple.

By completing missions that take you to some of the planet's different locales, you rise from rookie to veteran. On the way you spend most of the time dodging an array of colourful purple, orange and yellow attacks that assault the senses. The screen can be so packed with colour it becomes dizzying as you try to discern what's happening and identify where to focus your aim.

Enemy designs are a highlight. Gargantuan fire-eels, flora based beasties, deadly dragons, and bosses like the bulbous, split-jawed monster known as 'the bloated anomaly' stand out. Player-controlled dragons look great too. There are six different winged beasts, each distinguished by the attack type they use.

All dragons alternate between two attacks, switched between by pressing the left trigger. While the main attack cannot be changed (locked and dependant on the type of the winged reptile you choose), the second attack can be altered and swapped for skills that are unlocked at the end of missions. These run the usual mill of 'difficult to aim but packing a powerful punch', to 'accurate but less powerful'.

It's the same story with the physical attributes between dragon breeds, which vary significantly. Some have a huge defence but poor attack, others are fast and agile, but hardly able to withstand any punishment.

Regardless of what attack you use, or what enemy you face, the method doesn't change. You'll sweep a reticle over a target and press the right trigger to open fire. With certain attacks I found idly holding the trigger for entire levels and just choosing what direction to go was sufficient to progress.

Each mission has three objectives, and many include a boss battle. Variants include defeating as many enemies as possible, avoiding damage, and collecting orbs by navigating tricky parts of the environment. The objectives sometimes come in different orders, and some might not feature in certain missions, but all are repeated enough times that the enjoyment of them steadily dissipates.

Completing levels requires quick reflexes and constant dodging. You move around the limited area allowed with the left thumbstick, using the bumper buttons to barrel-roll from side to side.

The game will automatically steer you through the level, but not necessarily on a clear or safe route. At times you'll be headed towards environmental dangers such as jutting stone spires and need to yank your dragon aside to avoid taking damage.

However, the game doesn't give clear indication as to what directions you can move in to avoid level hazards as well as attacks. Sometimes you'll find you'll be pushed back off the game's invisible walls that enforce your route - and straight back into the attack or object you were trying to avoid in the first place.

In the Panzer Dragoon series, there was some element of strategy and planning built-in to the frantic nature of the shooting. You could manually pan the camera around the four sides of your dragon - front, flanks, and rear - to take out enemy waves as they appeared. An on-screen radar gave some clue ahead of time as to which direction the next attack wave was coming from.

While you can pan the camera round to your flanks here, it's at a limited angle. There is a radar on-screen, but because the enemy's location on it is based on where you're looking at that moment, you can get disorientated as soon as you pan the camera back elsewhere You're almost forced to learn the levels by rote, old-school shooter style. At times the camera suddenly whips automatically in another direction. By the time you've recovered from the disorientation, you've been hammered by whatever's attacking you.

There are a few sequences when you're snapped off the rails and put into arena-like sections. Many of the boss battles involve tackling multiple targets. In these moments you are free to fly in any direction you choose. The bumpers no longer barrel-roll but instead make you instantly change direction.

In these moments the controls are horribly unwieldy. Crimson Dragon was originally a Kinect-only title, until fans complained that they would rather use a controller. Possibly the result of that control method overhaul is that the handling here doesn't feel precise. The right thumbstick controls both aiming and camera, making it difficult to get your bearings. Even something as simple as banking one way or another feels rigid and unresponsive. Often you'll end up focused on the ground or the sky, and it can be difficult to know if you're above of below your target. Realigning the reticle can sap all sense of urgency from the encounters.

Visually Crimson Dragon is decent, but there's nothing here that exclaims itself as 'next-gen'. There's always plenty of colour and the screen is packed with enemies and scenery. It's an exciting presentation but nothing jaw-dropping.

Story sections between missions are disappointing. Still images depict holographic NPCs that forward the plot. The blandness of these exchanges ruin what could have been an enjoyable incentive to press on with the campaign. Each character stares forward blankly, frozen in a single pose, delivering dialogue that is often daft and rarely engaging. The story itself is convoluted and confusing. It involves conspiracies and double crossing. If you stay interested until the pay-off you're rewarded with an abrupt and unsatisfying conclusion. It's hard to understand what the struggle was for, why it was so important to succeed, and how your actions changed things. It's even harder to care.

RPG elements extend the longevity beyond the initial play-through. There's more than 100 skills to be unlocked by levelling-up each of the six available dragons. There's also a shop that sells stat-boosting ampoules, revival orbs and new dragons, so repeating content in order to earn more credits becomes a priority for anybody looking to 100% complete the game.

Some dragons can be evolved, but these plateau at a certain level until specified items are collected that allow the process to continue. The items needed come from rare creatures that momentarily pop up in missions. You can't be sure which levels hide what you need, so getting hold of the right items is mostly down to luck.

Having a variety of dragons to train is welcome, but it's a thinly disguised way of extending the run time. At times it seems impossible to progress. Your dragon simply isn't strong enough without some major levelling. The solution for that is to change to a different dragon, one that's better suited to your objective. Your rider level will need to be at a certain point before you can purchase new dragons though, and a new mount will set you back a significant number of credits.

Every dragon starts with pretty low base stats. These can be augmented through ampoules, which work as temporary stat buffs. The only way to achieve long term solutions is to revisit earlier levels to grind for more experience. One way of keeping competitive without the grinding is to hire an AI controlled wingman from other players online (other players can hire your dragons too). In return for their help they command a pretty hefty fee, as well as a share of the reward items. With a wingman you can request them to go up front, defend your back, and in a tight spot team up in a devastating combination attack that causes major damage to even the toughest opposition.

It's a shame that Crimson Dragon suffers from a lack of variety in gameplay. The repeated objectives and clunky controls detract from what could have been a better experience. Tighter controls and more diversity between missions would have gone a long way to making this a more enjoyable experience.

As it stands, you get a bunch of straightforward achievements for holding down the trigger and barrel-rolling left and right for seven to eight hours. That's not a great sell by any means. There's better launch titles out there for your money, offering depth alongside the spectacle we expect from the Xbox One.

If you're one of the original dragon riders from the Panzer days, Crimson may look tempting, but it's a much more flawed, shallow interpretation of a mythos, world and mechanics that the original Sega Saturn trilogy did much better.

Gamereactor UK
+
Enemy and dragon designs, Lots to do post-game
-
Feels dated, unwieldy controls, lacklustre story and story presentation
is our network score. What's yours? The network score is the average of every country's score 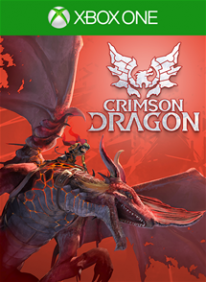