Company of Heroes 2 takes place, in contrast to its predecessors, on the Eastern Front. Deep in the cold of Russia, where winter is the only thing that is more merciless than the Red Army, where the German war machine got stuck in the snow, where the risk of freezing to death was as big as the risk of getting shot.

In a way, Company of Heroes 2's choice of location becomes a metaphor for the game itself. But we'll get to that shortly.

The first Company of Heroes was released back in 2006, and received universal praise. It is the highest-rated RTS and the highest-rated strategy game on both Metacritic and GameRankings. Everyone loved it and it sold over four million copies, more than enough to justify two stand-alone extensions.

Since then, Relic most concentrated on the excellent Dawn of War 2 game, but after four years of hiatus, Company of Heroes is back. Expectations for the sequel are obviously huge.

And therefore I say at the outset that no, Company of Heroes 2 does not live up to those expectations. It seems like Relic has bitten off more than they can chew, and along the way have made some unfortunate design decisions, making it feel like the game is buckling under its own weight. As I said, the choice of the Eastern Front as the game's focus could not have been more appropriate.

My first impressions of CoH2 are almost all negative. The controls are sluggish, your troops are slow-witted, and the first handful of missions are not very interesting. You often battle through ruins and rubble, and the many details in the terrain make it hard to see where you can move your troops, where they are able to take cover, and what things you can fire over. Mis-clicks happen often, the UI for building new troops seems cumbersome, and your buildings all look far too similar to give you an impression of what builds what. Matches feel as if they drag on, and enemy soldiers often act like bullet sponges. The graphics aren't exactly spectacular either.

I get highly annoyed the first time I really meet the hard Russian winter. The soldiers become even slower when they have to wade through the deep snow, and as long as they are not at a fire, in a building or in cover from the wind, their body temperature constantly drops. To such an extent that they die after a few minutes in the open. My snipers have happily packed winter clothes, making them immune to the cold, and so I'm forced use them as scouts to find enemy positions before I move the rest of the troops.

On paper it might sound fun, but it is also quickly becomes clear that, by design, there is a right and a wrong way to send my snipers, and if I choose the wrong way, they're shot without warning. It pulls all the pace out of the game, and where the first CoH was praised for its fast and frantic pace, this feels more like a case of winter depression.

I hardly know what to think. Certainly it could have something to do with the fact that Relic's old owners THQ went bankrupt shortly before the game was scheduled for release, but that alone can hardly explain how they could fall off the throne that way.

Fortunately, I find my answer. It turns out that CoH2, despite the fact that the graphics are hardly worth noting, is an absolute dog when it comes to system requirements. My rig usually has plenty of muscle, taking games like Bioshock Infinite in its stride with all the bling on, and barely breaking a sweat in Metro 2033. But Company of Heroes 2 brings it to a grind. I downgrade the graphics settings to uncomfortable options such as "low" and "medium", and suddenly the experience is entirely different.

A game that wasn't that pretty to begin with now becomes a little less nice to look at, but the pace shoots up, and previously limping and clumsy controls now feel much more responsive and sharp. It might also have something to do with the fact that the missions become a lot more entertaining as you progress through the game. Either way, I suddenly realise that I'm having fun. The winter depression has been beat, and instead I'm scurrying machine gun troops, AT-guns, tanks, artillery and the like around the various maps.

It is still far from perfect. Things that look like they should provide cover, don't always do so. Cannons and mounted machine guns have a dumb habit of pointing their guns in the diametrically opposite direction of the enemy when you move them around. Enemy soldiers are sometimes just standing around while you shoot them. And I still do not know what the officer that regularly shows up in your base to carry out Order 227 (shoot all Russian soldiers who retreat) is for - he's just standing there, looking lonely.

But as I said, once the T-34 tanks roll onto the battlefield, and I'm commanding my troops all over the place to flank the enemy, while artillery and mortar shells rain down from the sky, I can't help but smile.

One of the most brilliant moments is a mission about halfway through the campaign, where you have to use very small handful of troops to chase down a German Tiger tank through an abandoned village. It becomes a kind of cat and mouse game where you're frantically trying to find abandoned anti-tank guns, and then the tables are turned as you utilize guerrilla tactics to eventually surround and kill the tank.

The intensity then gets turned up a few notches more, as you're ordered to commandeer the destroyed tank, fix it and drive it to safety, while German troops approach from all sides. It is a tough mission, placing high demands on your battlefield awareness and tactical abilities.

Unfortunately, it's also a very clear example of CoH2 having technical issues that cannot be ignored. On my third attempt of beating this mission, I discovered that the German assault gun (an armored cannon on tracks) blocking the main road out of town was simply invulnerable. I had six AT-crews firing at it from all sides, and they didn't put a single dent in it. When I finally succeeded, it was because I managed to sneak my Tiger down roads while my AT-guns distracted the German tank. And the only reason I was able to do that was because I had already levelled the village houses which the German AI was otherwise scripted to fill with Panzerschrek troops.

Hopefully Company of Heroes 2 gets a lot of patch support from the developers after it is released, because it really is in need of it. It leaves a lot to be desired from a technical standpoint, and the graphics can in no way justify the requirements they put on the hardware. But, if you turn it down effects and battle through the dull start, there is a fun and entertaining strategy game to be found here - you just have to be prepared that it doesn't always work as intended. While falling far short of the standards set by its predecessor, Company of Heroes 2 is worth a look, despite its flaws.

Gamereactor UK
+
Basic good gameplay challenge at all difficulty levels, fast-paced and hugely hectic
-
A host of technical problems, questionable design choices, incomprehensibly high system requirements
is our network score. What's yours? The network score is the average of every country's score

"While falling far short of the standards set by its predecessor, Company of Heroes 2 is worth a look, despite its flaws."

Company of Heroes gets its own Humble Bundle

Company of Heroes 2 free on Steam this weekend

Relic and Sega confirm WWII RTS to be heavily discounted.

Back to the Western Front: Relic on CoH2

Company of Heroes 2 is going back to its roots with new content that's set to land later this year. Two key figures from Relic Entertainment talk us through the changes coming to their RTS sequel.

Paid and free content out now for Relic's RTS. 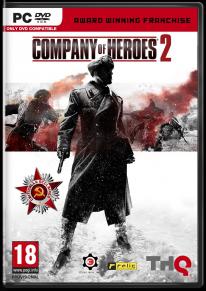 Starcraft II: Legacy of the Void