Castlevania needed a fresh start. After years of the same Symphony of the Night-copies, that might have been nice but lacked in ambition, Konami finally understood what the series needed: new blood. After having rejected some internal ideas, they gave the job to Spanish developer Mercury Steam. They've developed titles like the rather average Scrapland and Jericho, and I can't claim that I had much hope that they'd do any justice to my favorite game series. But obviously all they needed was a firm hand and some guidance, by none less than Hideo Kojima himself, because Castlevania: Lords of Shadow is a really good game.

Forget everything you might know about the storyline of the Castlevania-games. Lords of Shadow is a total restart that ignores most of what has gone before. We go back to the year 1047, at the breaking point between ancient mythology and Christian order. Gabriel Belmont is a warrior in a holy society that embarks on a massive quest in an attempt to resurrect his dead wife. He carries a weapon called the Combat Cross, which normally looks like a normal crucifix. But one end can be extended into a whip, and the other into a handy pole for staking vampires with. Because of this the weapon is also called Vampire Killer...

It would have been simple, but a bit unfair, to call Lords of Shadow a God of War-clone. Whipping skeletons and Medusa-heads is something Konamis' heroes had been doing for ages before Kratos entered the scene. But there are similarities in how combat works. With your weapon's long range it's easy to keep your enemies at a distance and hammer away at the buttons until they stop moving (most of them have been dead for a long time to begin with). Compared to Kratos you have to be a lot faster when it comes to your foot work and dodge out of the way more often.

But there's more depth to it than that. There's four different special weapons to be found during the course of the game, and the monsters can drop energy balls that powers your magic - which you have to spend wisely. Throughout the game you'll find new abilities and new combos that makes the combat more varied and more or less every level opens up new possibilities. In general, varied is something you can call the whole game and when it comes to tempo I'd probably compare it to Uncharted, but with more puzzles. Action takes up a lot of the time, but there are many times the adrenaline is allowed to stop pumping for a bit and you get a chance to enjoy the scenery.

Which is nice, considering that Castlevania: Lords of Shadow is a very pretty game. The monsters might be based on the old games, but its design is somewhere between Lord of the Rings and Guillermo Del Toro's Pan's Labyrinth. It might get a bit too much of the "dark, gritty, adult"-theme at times, and it's seldom with as much self-irony as the old games, but it fits the story and the mood of the game perfectly.

We get to travel across a mythological Europe where the old gods still haven't left room for the Christian medieval times, filled with ancient ruins, oppressed villages and caves filled with monsters. Besides the bombastic storytelling, the environments are the greatest strengths of the title. That you can go from a beautiful oasis to a cold, gothic castle makes me constantly look forward to the next level and what might await me there.

All this graphical overflow and the high production values come with a price, though. Mercy Steam are still no tech-gurus and the framerate suffers because of it. Compared to many Western games it's not that bad, but if you go from a silky smooth action game like Bayonetta Castlevania might feel like a slide show from time to time. And while I'm whining I might as well mention that sometimes it's hard to figure out where to go in the huge environments and some enemies can take a bit too much of a beating.

Another thing I don't like very much, which I didn't see coming, is the music. It might be incredibly epic, well-composed and makes my pulse race, but it lacks an identity. It recalls every soundtrack by Harry Gregson-Williams, Howard Shore or Hans Zimmer but I am never - except in a few easter egg-cases - reminded of Castlevania-classics like Bloody Tears, Beginning or Wicked Child. Perhaps epic choires fits the game's design better than disted guitars. Perhaps I'm just a reactionary obsessed with Konami's earlier music.

On the other hand, Patrick "Captain Picard" Stewart lifts up any production he takes part in and his role as the mentor figure (and storyteller) Zobek is a welcome addition to the game. Robert Carlyle does a good angry and bitter Belmont that really works as a main character. I would have liked a bit less of the grunting and panting whenever he goes climbing, though. The mood isn't really the same when it sounds like Gabriel is constipated while doing his death defying acrobatics.

Castlevania: Lords of Shadow is a great adventure with a smart story, lots of re-playability in the form of extra sidequests and exploration and it has some awesome battles. Mercury Steam have claimed it takes about 20 hours to finish and they are pretty correct in that. I'm glad they didn't fall in any multiplayer trap, and while the game has some flaws and could have been more technically polished, it's by far the best three dimensional Castlevania and one of the most epic action titles so far this year.

Gamereactor UK
+
Fantastic design, awesome battles, good story, lots of variation
-
Shaky framerate, some overpowered enemies, music lacks an identity of its own
is our network score. What's yours? The network score is the average of every country's score

REVIEW. Written by Mikael Sundberg (Gamereactor Sweden) on the 6th of October 2010 at 14

Zombies and trolls, werewolves and vampires beware - the original monster slayer is back! Mikael has taken a dive into a proper restart of Konami's classic series...

Castlevania games join Just Cause on Xbox One

Lords of Shadow and the original Just Cause go backward compatible.

Castlevania DLC was a mistake

Lords of Shadow gets sequel

Evidence of Lords of Shadow 2

Not official, but everything points to it.

Castlevania DLC out next week 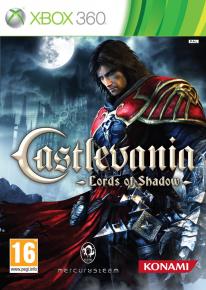