Ok, let's get one thing straight before we go any further, we're going to call this one Cadence of Hyrule from now on, as Cadence of Hyrule - Crypt of the NecroDancer Feat. The Legend of Zelda is a bit of a mouthful. While it's a title that satisfies in terms of SEO, it's a bit cumbersome for review writing if you ask us (which you didn't, we realise that), so we're going shorthand from here on in.

Cadence of Hyrule is a game that builds on the foundations of Crypt of the Necrodancer, except it's done with a wonderful Legend of Zelda wrapper that Nintendo fans will surely appreciate. Crypt of the Necrodancer is a particularly excellent game that we've played on multiple systems before now, and this Zelda-styled take on the formula is a most welcome fusion of theme and gameplay that we've thoroughly enjoyed exploring this past few days.

Going back to basics: Cadence of Hyrule is a roguelite adventure game whereby you have to explore levels, find loot, and battle enemies. Like CotN before it, Brace Yourself Games has taken the single-step gameplay of the original Rogue and put a fresh spin on things. This is done via the introduction of music, and players are rewarded for moving in time with the beat (more precisely: extra diamonds are given to those who can take down all the monsters in any given stage without losing their rhythm).

With its single-step gameplay, Cadence of Hyrule is closer to the original Rogue in terms of gameplay than the vast majority of titles that call themselves 'roguelike', but this is more of a roguelite because the progression is actually very forgiving (there is a permadeath mode if you want it, however). Like CotN, if you die you have to start again, and like its predecessor, there's an economy system that persists beyond each individual life and death. In fact, Cadence of Hyrule is even more generous in terms of the carryover between games, and the diamonds that you spend on new items to aid your next run are plentiful. You lose some items, sure, but at least you get to keep the weapons that you find during your travels.

You can play with a random seed although we decided to go with the map authored by the developers. This map is a patchwork of different areas, each one full of enemies to conquer and items to collect, all Hyrule-related and inspired by so many past adventures. Many levels have areas to unlock that offer up even more tempting loot (if you've got the gear to access them properly, of course) and there are even some light puzzles to solve, further feeding into the Zelda theme. To its credit, this title may be built around new mechanics, but this feels like a Zelda game, and that's to the credit of its creators.

During your journey through Hyrule, you'll battle some familiar beasties, such as bokoblins, but a lot of the enemies can still be compared to creatures we've battled many times before in Crypt of the Necrodancer, so while they might be visually different, there are a fair few similarities. Each enemy type dances to its own tune and learning the movement patterns of each, and then reacting accordingly, is at the heart of the experience. Most of the time it's pretty straightforward, but every now and then the screen fills up, you're chased by powerful enemies, and keeping track of everything that's going on can be tough.

You can, over time, unlock additional hearts to give you more health (and thus more longevity), and there are different weapons that change the effect of your attacks, such as a broadsword that hits three tiles simultaneously. There is also a broad selection of items that can be stored in your inventory and equipped as desired, and these give you even more tactical options to play around with. From rings that reflect damage to boots that let you walk on air, there's a ton of subtle depth to be found in your inventory.

After arriving in the world of Hyrule at the start of the game (you initially play as Cadence, who starred in CotN), you have to choose to wake up either Link or Zelda from their slumber (we went with Zelda in solo, Link in co-op), but there didn't seem to be all that much to differentiate the characters. Once you've done that it's a case of exploring the world in search of four dungeons before heading to the castle to take on the game's villain, Octavo. Regardless of who you pick, you'll be exploring a world built around well-known landmarks, fighting themed enemies, and listening to music that infuses the best of Necrodancer and Zelda - fans will undoubtedly take a lot of pleasure from the work that has gone into bringing this pixelated world to life in both new and familiar ways.

Local co-op is well implemented, although it can be hard to keep track of things when there are two of you, and if one player leaves an area the other is dragged along to the next screen regardless of what they were doing at the time. That was a little annoying, but we did enjoy the tactical options afforded to us by having a companion, and with liberal use of the shield it's possible to box enemies in with one player and have the other take them down with a cheap shot in the side.

Cadence of Hyrule is an excellent elaboration of the Crypt of the Necrodancer formula, and we think the decision to make things more accessible was the right one. Not only does it make this unique brand of toe-tapping roguelike gameplay available to a broader audience, but the more forgiving structure means that you're likely to see more of the game and get to explore its many subtleties regardless of your skill level. The increased emphasis on puzzle-solving and environmental traversal helps to set it apart and makes it much easier to swallow the fact that a fair few enemy patterns have been borrowed from the original. Then again, if you're going to borrow moves from any game, it might as well be Crypt of the Necrodancer - just like the title that inspires and defines it, Cadence of Hyrule is addictive and engaging and a whole ton of fun.

Advertisements
Gamereactor UK
+
Addictive gameplay, accessible take on the formula, great use of the Zelda license, lots of depth and secrets to discover.
-
A fair amount of borrowing from Crypt of the Necrodancer (which is excellent, but still).
is our network score. What's yours? The network score is the average of every country's score

"Just like the title that inspires and defines it, Cadence of Hyrule is addictive and engaging and a whole ton of fun."

Zelda-series icons will be joining Cadence of Hyrule

Cadence of Hyrule gets new story as free update

Octavo's Ode is free for all players, and takes us on a new adventure in the crossover that released this year.

An accolades trailer gave us the news, and this lets us sample the Zelda mashup with Crypt of the Necrodancer.

Crypt of the Necrodancer: Cadence of Hyrule releasing in June

Crypt of the Necrodancer meets Zelda in Cadence of Hyrule

After opening with Cuphead, Nintendo closed its Nindies Showcase with a Zelda-themed surprise. 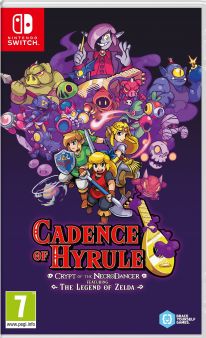