Don't be fooled by the first word in the title, this is not a racing game. Burnout Crash is a puzzle game based on a very simple premise - drive your car into an intersection and start a massive pile up of cars. It may seem shallow at first, but it has been given a rather ambitious treatment. Your car is able to explode over and over again, and thanks to the aftertouch feature from the Burnout series you can direct your flying scrap heap into on coming traffic to add to the mayhem.

Burnout Crash consists of a selection of intersection that work a bit like levels. Each level or intersection has 15 challenges, and completing each gives you a star and these stars unlock new intersections and challenges with which to test yourself. You also unlock new vehicles with different weight, velocity and handling.

At its core Burnout Crash is about high scores, or causing as much damage as possible, but these challenge add a sense of progression and purpose. The challenges are divided into three game modes - Road Trip, Rush Hour and Pile Up. They may come across as very similar to each other, but you will have to use very distinct tactics to master each one of them.

In Road Trip the objective is to get as many cars as possible involved in the crash. One fundamental tactic to achieve this is by building enormous road blocks, that in unison work like a spider web to catch all traffic. There are a lot of points to be won if the destruction spreads to nearby buildings, but then you also leave the roads unattended and some cars may slip through your web unharmed. If this happens five times it's game over. If you do well enough the round will end with an event of cataclysmic proportions that can turn the whole block into rubble.

In Rush Hour the objective is to achieve as much damage as possible within 90 seconds. When the clock runs out your car explodes, with the idea to put yourself in a position to take out as many cars as possible with your final blast.

The third game mode, Pile Up, offers the most challenge, but is also the least entertaining mode. The objective here is to stop all cars without causing explosions (which makes the wreckages disappear). When the cars stop coming "Inferno" is activated, a multiplier that gives you a greater score with every car or structure that's on fire. Your new mission statement: get all the cars that have piled up to start burning and then explode together.

It's truly delightful to see all the metal and burning rubber on the roads, and it begs for you to give it another go. What is missing are the incredibly detailed crashes for other Burnout games. Burnout Crash, may be a simple downloadable title, but even with that in mind you wouldn't call it pretty. The menus are another area that could have done with some tidying up. They're not just ugly and cluttered, but you are forced to go through several steps after each level, which is something that seems contradictory to the casual nature of the game.

On a more positive note, Autolog (featured in last year's Need for Speed: Hot Pursuit) makes a welcome appearance in Burnout Crash. It keeps you up to date with your friends' high scores, and allows you to challenge these with the simple press of a button. So even if Burnout Crash lacks a bit of substance, and lays all of its glory bare within the first minute of play, it still manages to be quite addictive.

What contributes to the addictive nature of the game is the insanity of it all. One of the most satisfying things about it is to witness the absurd incidents that can occur. It would be a shame to spoil these for anyone about to play the game, but you should keep an eye open for tornadoes, meteor showers, and planes making emergency landings. The power ups are equally over the top, with magnets that direct all traffic towards your car, and several special vehicles that require more advanced techniques.

There is also a well utilised licensed soundtrack here that adds to the atmosphere. Everything that happens on screen has a tune associated with it. When a blizzard hits you will hear "Ice Ice Baby" with Vanilla Ice, when the police arrives they do so to Inner Circle's "Bad Boys". The play-by-play announcer also adds to the madness with his absurd references. It won't appeal to everyone out there, but it contributes to a unique experience. Burnout Crash doesn't take itself very seriously, and neither should you. Give your brain cells a break for a few hours and enjoy the crashes.

REVIEW. Written by Mathias Holmberg | Gamereactor Sweden on the 27th of September 2011 at 15

"Criterion have taken the popular crash mode from their Burnout series, turned it on its head and added all sorts of crazy ideas."

Stack 'em up on your iPad.

What is Burnout Crash? 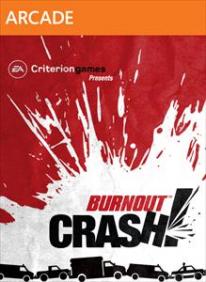