In Japan Itafaki Street, a Monopoly like game has been very successful over the since its initial release on Famicon back in 1991. Now the game hits Europe for the first time under the name Boom Street.

Boom Street resembles Monopoly in many ways. Players are placed on a board, and one after another they roll the dice and make their way around the board. The board in turn is divided into districts, and in different places you can acquire unowned property.

Other players are faced with a predetermined fee if they happen to land on your property, and players can invest money into the property in other to raise these fees. Landing on specific position can also result in bonuses that either grant you an advantage or put your opponents at a disadvantage. The objective is to reach a certain amount of wealth.

Boom Street adds an element not found in Monopoly with its stock system. You can buy and sell stocks in a district. The value of the stock is influenced by investments made in property in said district. It's a bit complex, but it is also something that adds a layer of depth, as you stand to make a lot of money if you dominate a district from a stock perspective.

Furthermore, you can make money from the investments made by opposing players by buying stocks in districts where they own property, and vice versa. The system allows for deeper strategy, something that may come as a bit surprising from a game that looks aimed at kids. And speaking of kids, Boom Street, can be played in a simplified version where the district and stock systems are left out.

Interestingly, Boom Street combines characters from both the Dragon Quest series and the Super Mario franchise. There are 13 selectable characters from each of the universes and you can also play with your Mii.

Boom Street is the most entertaining when it is played with a bunch of people with standard rules, but it is hard to find the motivation to play it alone. Competing against a computer opponent is simply no fun, and waiting for your turn is equally boring. Boom Street supports online play, but a lot of the excitement is lost when you're not sitting in the same room as those you play against. Boom Street is simply meant to be played with a group of people.

Boom Street seemed to come out of thin air, and it turned out to be a nice surprise. The simple yet deep gameplay mechanics are sure to get your competitive juices flowing even in the most calm and reserved gamer. If you've got a bunch of friends with some experience of Monopoly, then Boom Street is something you need to check out.

Gamereactor UK
+
Engaging, interesting district and stock system that creates variation, gets the competitive juices flowing.
-
Can get a little complex for the youngest, not much fun to play on your own.
is our network score. What's yours? The network score is the average of every country's score

REVIEW. Written by Mohammed Warsame | Gamereactor Norway on the 28th of December 2011 at 09

But not the way you imagine. 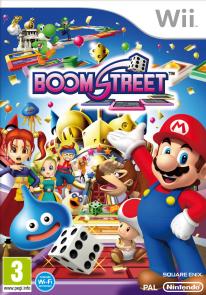