At the time of writing, there was really no way for us to get much time with Assassin's Creed: Brotherhood's multiplayer. This review is only about the singleplayer campaign. We'll publish a more indepth look at the multiplayer next week.

There's no doubt that Ubisoft got a lot for free by basing their latest Assassin's Creed-game on Assassin's Creed II. But it also means that for all intents and purposes, Assassin's Creed: Brotherhood is more or less an expanded version of that game - if you didn't like Assassin's Creed II, there's no reason for you to look at this one, no matter the additions and refinements. It's not a reprise of the quantum leap Ubi took between the first and the second game in the series. This is Assassin's Creed 2,5.

If you did enjoy Assassin's Creed II, and wanted more when the credits rolled for that title, then you will love Brotherhood. At the core it's still a game about scaling buildings, stabbing people with sharp objects and hang around prostitutes, mercenaries and thieves. And it's still as entertaining and delightfully brutal, just like we want our Assassin's Creed-games.

Assassin's Creed: Brotherhood expands on the story of Ezio, the main character of the previous game, as our gang from the future goes to Monteriggioni to search for the Apple of Eden that they believe has been hidden there. Desmond goes back into the Animus to explore Ezio's memories, and the plot takes us to Rome which becomes the main backdrop to the storyline.

Rome serves multiple purposes in Brotherhood. Not only is it the city where a majority of the story takes place, it takes on certain roles that Monteriggioni served in the second game. The people are oppressed, and Ezio takes it upon himself and his fellow Assassins to help them - not only by assassinating the oppressors, but also by restoring the city to its former glory. This is done by buying shops, banks and landmarks across the city, similar to the way the city of Monteriggioni was upgraded during Assassin's Creed II. The more shops you buy, the more items become available and your discount increases. Your income, again similar to your base of operations in the previous game, also depends on how much of the city you've rebuilt.

Rome is huge, and the graphical engine running these games is as impressive as always. The graphics haven't really improved, but they don't really need to - the amount of detail brings the city to life and the view distance is amazing. It's a lot easier to navigate through Rome than through for example Florence or Venice, mostly because you can now ride horses within the city limits and a fast travel through well-placed tunnels become available as you upgrade them. Both are welcome additions, and help to lessen the frustration of travelling across the city.

A big focus of the game is, not very surprisingly, on the Assassin brotherhood. Altaïr and Ezio both worked alone in the two previous games, but this time around Ezio decides to start recruiting. By helping certain civilians you can add assassins to your entourage, which then level up by either fighting enemies or being sent out on contracts. They can be called upon whenever you need them, either to help you in a fight or to take out a guard than happens to stand in your way. They pop up, make the kill and disappear. It's hard not to feel some form of pride when they finally reach the highest level of assassin, do their "Leap of Faith" and become your true brothers and sisters. Or am I geeking out too much now?

Bah, screw that. Let's geek out completely. Because Assassin's Creed: Brotherhood is an amazing game. I loved Assassin's Creed II and wasted countless hours on it, exploring every part of the cities, picking up treasure and collecting feathers for my poor grieving mother. Assassin's Creed: Brotherhood does the same thing to me, but even more. I get completely sucked in, I take pride in my assassins and the rebuilding of Rome. I loathe my enemies, the Templars, and happily take on whatever assassination contract that comes my way. I help the prostitutes of the city and take bloody vengeance on whoever messes with them. All while I'm collecting feathers, flags and treasure.

With only one year between Brotherhood and Assassin's Creed II, many of us feared that this game would be some kind of cheap copy of the latter. But that's not the case. While the main gameplay remains more or less the same, the additions and new features make Brotherhood even more immersing. Ubi have shown that they have an incredible attention to detail, they know we we will giggle when we see a new painting in our hideout, or when one of our assassins pops out of nowhere and stabs a guard in the neck. With Assassin's Creed: Brotherhood they've shown that they can make a polished, entertaining and especially cool game, filled with content. If you are a completionist, you have many hours ahead of you...

I have to admit that I really like the story as well. While it initially felt out of place in the first Assassin's Creed, the whole futuristic plot with evil corporations hoping to control the world, with only the rag-tag army of assassins to stand against them, have utterly captured my imagination. I guess it might have something to do with me being an old Templar-buff, with several books about the historical order in my bookshelf. It might have something to do with all the Robert Anton Wilson I read during my late teens. I don't care. I want to know what's going on, I want to know and understand what the heck happened at the end of Assassin's Creed II, how it all ties together. It's cool, alright? Don't look at me like that.

Gamereactor UK
+
Tons of stuff to do, amazing graphics, wonderful soundtrack, solid gameplay, lots of new great features
-
Some control issues, camera gets in the way at times
is our network score. What's yours? The network score is the average of every country's score 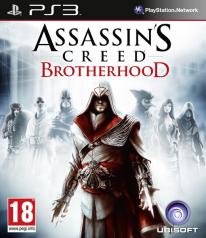