Ash of Gods: Redemption combines so many different elements that it's hard to easily summarise. In a rather large nutshell, it's a tactical fantasy adventure that has a lot in common with a choose-your-own-adventure along with some card game elements, all underpinned by a turn-based battle system and dialogue trees. Actually, we think we summed it up pretty well. And so, without further ado, here's what it's all about.

Long ago, something called 'the reaping' began and huge numbers of people died. It was stopped before too many people died by some equally powerful individuals, but now, the reaping is back and this time it threatens to wipe out everyone. That's the basic crux of the story, and seeing as how important the narrative is, we're not going to ruin too much by saying more than that. All we'll say is that marks start appearing on the back of peoples' necks causing them to go feral and kill each other, and the Reapers have started appearing in towns and cities once more.

The narrative is told through the stories of three different characters. There's Thorn, who is the captain of the guard; Hopper, who is a kind of healer; finally, there's an assassin called Lo Pheng. Each of these protagonists has other characters that join them and that they regularly interact with. As a reference point, it's also quite similar to The Banner Saga, another tactically-inclined RPG with strong story elements.

As we mentioned earlier, in some respects Ash of Gods is like a choose-your-own-adventure novel. Here, however, you are bombarded at the start of your adventure with so much information that it all gets a bit overwhelming. There's the backstory, lore to learn, character stories, and that's all combined with the fact that pretty much straight from the start you're asked to make dialogue decisions that have an impact on the entire game.

Yes, it's a phrase that's commonly used: your choices matter. It's often misused, but here it's got a point and there are multiple endings and they range from good to bad (which in turn offers replay value), but we do feel that the heavy info dump at the start has both positive and negative effects. On the one hand, it draws you in and lets you soak up as much info as you want to, but on the other hand, it's all just a bit too daunting. We think we could have been eased in a bit more slowly. This is actually symbolic of probably the biggest issue that the game has: it tries to do too much.

You can choose to play this game on either Normal or Iron Man mode, but if you just want to get involved in the narrative, there's a plain old Story mode with automated combat. Now, while this wouldn't necessarily work for every type of game, here we think it's a great feature. Not that the combat doesn't work, far from it - it's good albeit unspectacular. It's just that including a mode that allows you to focus on the story with all its choices and history allows players to really get the most out of what is, in our opinion, the best part of the game: the narrative.

So, on to the combat. For the most part, it works well. Each character you take control of in your party has their own unique moves. There are also different classes such as archers, wizards, and fighters. One thing we really like is that you can attack either the health or the energy of a character, which added an interesting tactical element to the battles. All in all, this part of the game was fun but limited, with a wide range of attacks, and the only issue we had was that sometimes it felt a little clunky while using a controller, and we found ourselves getting frustrated with the sometimes unintuitive UI that clearly works best on PC.

Then, there's the card element. Instead of attacking or moving, you can also play a card (from a hand that you choose) during combat. These cards contain options such as restoring health or upping your defence. While it did add something unique to the experience, the game would have worked just fine without it. We're not complaining, but it felt like just another thing to get your head around.

So, now we've had our little moan, let's get back to talking about something more positive. Ash of Gods: Redemption is stunning. Graphically it has a lot in common with The Banner Saga, and a lot of people have pointed out the visual similarities. For our part, we were also reminded of Dungeons & Dragons, the popular animated kids show from the 1980s. The cartoon style worked perfectly for us, though, and not just the characters that look good, the textures and backgrounds are also well done. The visuals perfectly set the scene for this tale of a land cursed by the reaping, yet it seems only right that we also offer a nod to the amazing soundtrack. At times it sounded like Enya had made an apocalyptic themed album and we think it worked perfectly. In fact, the visual style and the soundtrack gelled brilliantly with the atmosphere.

So, to sum up, this story-driven adventure has a beautifully written narrative, and if story games are your thing, then cast your eye here. It can be a little heavy at times, but there's plenty of a reply value if you get into things. For those who just want some quality turn-based combat to mull over, this might not be the best option because even if the combat works well it can feel clunky and uninspired. All in all, Ash of Gods: Redemption is a stunning game with a great soundtrack that tells some interesting stories, but it's not a tactical masterpiece and it tries to do just a bit too much for its own good.

Gamereactor UK
+
Looks amazing, sounds great, and has a good story to boot.
-
Tries to do too much at times, a bit overwhelming.
is our network score. What's yours? The network score is the average of every country's score

"A stunning game with a great soundtrack that tells some interesting stories, but it's not a tactical masterpiece." 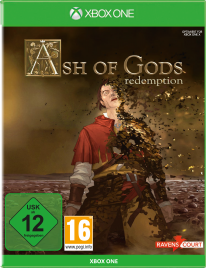