A simple mission or so they thought. Salem and Rios packed their hockey masks, weapons to fuel a small civil war and headed to Shanghai. Simple mission, easy cash. But as they arrive all hell breaks loose and the skyscrapers fall like domino bricks. Time to put on the masks and head into overtime.

Shanghai falling apart is something that runs like a red thread through Army of Two: The 40th Day. There are things falling apart and exploding all the time. As opposed to the first game where you went from fighting on a carrier, to the mountains of Afghanistan and even on American soil, Salem and Rios remain in Shanghai throughout the game. As a result the environments aren't as varied, but EA have done their best to mix things up.

If Army of Two was something of a light version of Gears of War, EA have tried to carve their own niche with the sequel. Salem and Rios have been given more personality and the weapons customisation has been taken up a bunch of notches.

Part of giving the game and the characters more personality are their weapons. Choose your magazine, barrel, stock, grip and more for a huge selection, paint them in a pretty colour and combine with a classy pattern. Or perhaps you'd rather give it a gold plating for $10,000. It may seem a bit silly, but it serves its purpose as it allows me to create a gun that I feel so comfortable with that I have no problem using it throughout the entire campaign. In fact, the customisation masks the fact that there aren't that many different weapons in the game.

The supply of gun parts is constantly updated as you find deposits along your way. These are usually guarded by enemies that you need to take care of quickly, if you fail to do so, the boxes will be locked up and you miss the opportunity of adding new parts. As long as you're not in a combat situation you can jump out of the game and customise your weapon at any time.

EA have worked hard to make the gameplay mechanics more accessible. One example of this is how you throw yourself into cover and no longer stick to walls behind cover. The idea is probably to make it easier to move around, but I'm not convinced that these changes improve the game. Sure it takes fewer button presses than in Army of Two or Gears of War to navigate your surroundings, but often I find that Rios does something I didn't intend like standing in the middle of a doorway instead of leaning in from one side of the door to shoot whoever is on the other side.

Army of Two: The 40th Day is meant to be played with a friend. There is even a split screen mode for those of you who suffer from online phobia. A good example of how co-op is essential is the aggro meter you raise by shooting at your enemies. If one of you shoot at the enemy, the other player is given the opportunity flank your opponents and take them out. This system was in place in the first game and works even better in the sequel. You can tag the enemy so your friend easily can see who you want him to take out. Another new option is to kneel down to lure in your enemy so he can be taken out by your mate. You can even feign your own death in order for the enemy to leave you alone and there will be plenty of opportunity to stand back-to-back and let the bullets fly in all directions.

Several of the best boss fights also require fine tuned co-operation. One player has to draw the fire in order for the second to inflict proper damage. An example of this is an enemy with an impenetrable armour in front who slowly walks you into a corner and takes you out. If one player lays down a proper rain of bullets the other can sneak to the side and circle him and attack him from behind where he conveniently lacks armour.

However, all that is new is not well. One of the biggest changes is that Salem and Rios sometimes have to split up and take different routes in order to open up doors and the likes. Perhaps a good idea in theory, but it means that you cannot help each other to the same degree, and you can also die without your buddy being able to help you out. And while you also get split up in Gears of War 2 it is almost always possible to assist the other.

There are also hostage situations. I'm not sure why, but masked bad guys don't really need reasons and it's easy enough to understand you need to free the hostage. You can do this by putting a gun to the head of the leader and convince the others to give up, or simply by taking them all out with bullets. The latter option will result in lost morale points and thus you may miss out on some bonus items. A good idea in theory once again, but Salem and Rios are a couple of badass mercenaries and it feels weird to start cuffing people all of a sudden. The morale dimension feels a bit out of place and tacked on.

A piece of warning for those who were thinking about going at it alone. The artificial intelligence is far from what it ought to be. Sure, the enemies sometimes pull off fancy moves like healing their friends if you don't deal with them decisively, but they are constantly on the defensive and never really do anything but lay down the fire. They never advance or try to surround you. This lack of intelligence is also evident in your A.I. Partner. He never fully co-operates with you and doesn't tag his targets. At one point my partner refused to to push down an object that we needed to advance and I had to restart the level.

The multiplayer in Army of Two felt more like an afterthought and I was surprised to find how much fun it was in The 40th Day. There are four game modes (one is exclusive to those who pre-ordered for a month). I enjoyed Warzone the most. It is a very varied experience where you get different objectives such as killing an AI controlled character, and then having to defend an object and so on. Extraction (the pre-order exclusive mode) reminds me of Firefight (Halo 3: ODST) and Horde (Gears of War 2).

Even if there is an obvious visual improvement over the original, The 40th Day is not particularly good looking. It has a crude look, the camera isn't very co-operative and since the whole game is set in Shanghai there isn't as much visual variation. It's far from poor, I enjoyed both the graphics and design of Army of Two, but I had expected more improvements. With that said, the effects are very good, and lift the overall impression.

If you worried that EA would have made a sloppy job with the Playstation 3 version once again you can relax. It is near impossible to tell any difference between the two versions apart from somewhat better shadows in the Xbox 360 version.

I really enjoyed Army of Two when it was released. It had its rough edges, but it only felt proper given the nature of the rough necks Salem and Rios. In the sequel it seems the concept has been refined and Salem and Rios have been turned into fully fledged human beings. It ruins some of the macho vibe for me and some of the new ideas such as the morale meter and the hostages could have remained on the drawing board. But EA have managed to evolved the series. It's not just a Gears of War clone and I like it.

Rios and Salem are back. Back-to-back in fact. Find out if their return is triumphant or not in our review.

New DLC for Army of Two: The 40th Day

Try The 40th Day before release

We talk to EA Montreal 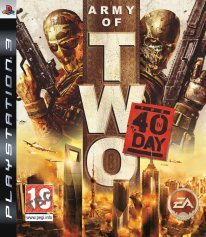