With Anno 1800, Bluebyte and its hundreds strong workforce show what a triple-A city builder can look like. Its endlessly gorgeous islands covered in a multitude of houses and hundreds of citizens raise the bar for other games in the genre by a large margin. The mechanics themselves have gone through a lesser makeover, and series veterans will feel right at home in the industrial revolution.

While the meat of the game has always been in the open sandbox, Anno 1800 includes a sizable single-player campaign to act as a tutorial and world-building tool. The storyline takes your recently impoverished person and sister through a selection of simple missions themed around your deceased and wrongfully accused father. The large 3D characters of the narrative are well-made and animated, but the actual personalities are so clichéd you don't know if the parody is intentional or not. It's pretty much impossible to take the plight of the story's actors seriously.

Unfortunately, the same on-the-nose dialogue continues in the sandbox, but to a lesser extent. Your rivals and allies are basically a collection of thick caricatures with repeating phrases and little originality. Hammering a simulation game for its narrative is a bit uncalled for, but while other aspects have received such attention to detail the dialogue comes off as amateurish. AI, in general, seems very passive and even your allies won't bother helping you with pirate attacks, preferring to sail by as your ships are sunk next to them.

Anno series has always been about building up your city and meeting your populace's increasing demands for higher-end goods and services. The industrial revolution is no different and people from farmers to artisans and engineers will keep you busy the entire time. There are scores of different crops, building materials, luxuries, and ship parts to manufacture and trade, so the early game's simplicity will gradually shift into maintaining a complex, multi-regional production chain while also dealing with your rivals, small quests, expeditions and the like.

This shift creates some issues with the pacing as the mellow early game is superseded by often frenetic shuffle from one island to another, fixing production issues and dousing fires left and right. There's also no option to issue commands while the game's paused, which is a shame. It won't stop the time even for when the player has to deliberate their next move on a full-screen expedition window, where you have to choose on how to solve a particular roadblock. The game just chugs along in the background with you unable to see anything else than the illustrations, texts, and choices for the expedition.

Organisation is the name of the game and unchecked expansion of new housing will be met with shortages, riots, and burning city centers. It can be a lot to deal with especially on your first playthrough. Fortunately, the well-crafted and smart UI helps the player a ton. All buildings are categorised into production chains, so if you need to create Steel, for example, all the buildings needed for that are contained within the same construction window. It's a smart move for a game all about converting one resource to another and then to another again. Other brilliant strokes include customisable quick-slots for most often used buildings, blueprint mode for planning new areas without having to spend resources on the buildings and so on.

Where the user interface falters, though, is the lack of centralised information. It would have been very beneficial to see a summary view of your cities along with resource production graphs to plan your next moves or solve bottlenecks accordingly. One odd omission about the theme is that unemployment is apparently a non-issue for the workers. It would have been nice to see this era-defining shift from labour-intensive farming and manufacturing to automation and industrialisation represented in some innovative way.

The visual and audio side on Anno 1800 is amongst the best in the business. The transition from small country villages to bustling metropolises and smoke-billowing industrial powerhouses is crystal-clear and powerful. The streets are full of people minding their own business and every single production building has its own bespoke animation from steel mills to potato fields. The transition from Old World to New World is similarly striking with maples and birches transforming to South or Central American palms, exotic crops, and beaches. New world buildings retain a colonialist architectural style reminding Europe of its dark past. The musical score with its soaring optimism is also impressive if somewhat repetitive. All in all, screenshots don't do the game justice and it has to be witnessed in full motion.

Anno 1800 is a magnificent game to look at and a testament to what an accomplished large studio can achieve. There are endless amounts of beautification and tinkering to do while your cities grow into increasing elaborate melting pots of people and ideals. Daft characters you don't quite know what to think about taking away from the charm of the single-player campaign and the lack of a good summary view can make pinpointing your most burning issues a bit hard. The current game supports normal multiplayer with each player controlling their own "nation" but a future content patch promises to include a more cooperative experience with several players sharing a single nation. This would be an excellent addition, taking away some of the cognitive load and rush of maintaining a larger empire.

Advertisements
Gamereactor UK
+
Gorgeous visuals, Excellent gameplay, Smart UI, Tons of things to do, Multiplayer.
-
A lot to handle in the late game, Daft characters and AI
is our network score. What's yours? The network score is the average of every country's score

"Anno 1800 is a magnificent game to look at and a testament to what an accomplished large studio can achieve."

A second Season Pass is on its way as over one million players have bought Ubisoft's latest strategy game.

We have a brand new trailer for the expansion, adding plenty of new content to Ubisoft's strategy title.

Anno 1800 gets free trial for Gamescom

Ubisoft also revealed that the second DLC, titled Botanica, will be releasing next month as well.

A new Third Party character called Old Nate comes on board, as well as plenty of other features with this expansion.

The Anarchist lands in Anno 1800

This AI character is all about causing chaos, and uses propaganda and speaker towers to incite riots in your game.

Anno 1800 has biggest launch in the series

This month's game is the fastest-selling Anno title to date, selling four times more than Anno 2205 managed in its first week. 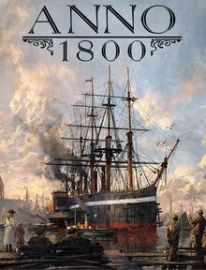