As far as gameplay goes this is an excellent little game, much like the above mentioned puzzle platformers. At its core it's a platform title, where you jump around with a paper thin main character that looks like the off spring of the early 90's soft drink mascot Fido Dido, and a milk cartoon, and the gimmick or unique feature is that the world around can be rotated 360 degrees. This is achieved by first halting time, and then rotating the Wiimote.

The experience is a bit like a physics based labyrinth game, or like the bonus levels of old Sonic the Hedgehog titles. I'm also reminded of Super Mario Galaxy and Portal, with the difference that this is played out in two dimensions.

At first your objective is simply to make progress by turning ceilings in to floors, and ascending slopes into gentle descending slopes. After a while obstacles and aids such as boulders and bats appear, and you have to put them in the right spot by manipulating your surroundings. Boulders can crush obstacles, but they can also crush the main character. Bats distract scary cocoons.

And once you've gotten into the swings of things, it feels pretty neat to freeze in the middle of a jump rotate the screen and safely land on a branch that you wouldn't have been able to reach before. Your momentum is "saved" when time is stopped, so every little distance you fall is added up, and if the sum is too great your character will end up as a sad collection of pieces of paper and you will be sent back to your last checkpoint - coincidentally the checkpoint looks like a copy of you who points in the direction you're supposed to head next.

And Yet It Moves is more than just a challenging platformer. Just as the case was with Braid and Limbo, the atmosphere is brilliant, thanks to a subdued and almost creepy presentation. The soundscape is hard to describe, but there any proper tunes, and instead sounds make up an interesting ambience. If you turn of the lights and play this late at night, the effect on you is even greater.

The visuals are a mash up of paper clippings, cardboard pieces, and reminds me of the XBLA title Axel & Pixel quite a lot. There is no visible HUD, and the overall impressions is that this is something you could find in the video section of a Museum of Modern Arts, or some weird childrens show from the 70's. When we go from caves, and forest levels, to rainbow coloured walks through pure psychedelia the experience feels even more twisted. I think the graphics are something you are either going to love or hate, you'll want to burn it all down, or rip it off the screen and save it in a scrap book.

And Yet It Moves almost reaches the same levels of indie greatness as Braid and Limbo, and it certainly does it with its own unique brand of design. It's something you should look closer at if you crave platform challenges and enjoy messing with your surroundings.

Gamereactor UK
+
Challenging puzzles, creative concept, great atmosphere, suggestive soundscape
-
A bit short, design won't appeal to everyone
is our network score. What's yours? The network score is the average of every country's score

REVIEW. Written by Jonas Elfving (Gamereactor Sweden) on the 6th of September 2010 at 14

In And Yet it Moves you are the one doing the spinning, and you have to master your spinning in order to progress through platform levels... 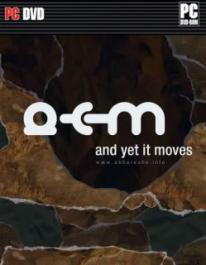