Michael Thorton is pissed off. First he was drugged and recruited into a shadowy organisation known as Alpha Protocol, then he was sold out and now there is an annoying Russian arms dealer who apparently loves 80's rock who is trying to kill him. Not only does he seem like an annoying person, but he also has an annoying habit of killing Mike as he runs towards him with some kind of kamikaze knife attack. He absolutely will not stop, even as Mike pumps round after round into him with his shotgun. But hey, Alpha Protocol is an RPG, so never mind how it looks it's all about the numbers.

Oh, and by the way, I'm controlling Michael Thorton and I'm pissed too. Pissed about the sloppy execution and ill chosen elements of game design that ruin an otherwise interesting and mildly innovative title.

An easy way of describing Alpha Protocol would be to say that it's your typical Bioware RPG set in the world of international espionage, but that would also give you a wrong impression about the game.

First of all, Alpha Protocol feels more like a game designed during the last console generation than this one, this is more a Knights of the Old Republic in espionage clothes than a Mass Effect in espionage clothes. Secondly, while this is definitively an RPG, it plays out in realtime and while you do have powers and things like that, most of the combat you will experience will feel like a rather mediocre stealth game you may have played five years ago or so. The cover system is poorly implemented, the artificial intelligence of enemies is spotty at best, and rudimentary sneaking around just doesn't feel rewarding at all.

I soon tired of the stealthy business and spent my upgrade points on mastering the shotgun. You can play Alpha Protocol in a few different ways, it's just that none of them are really solid. Choose your poison, I went for a straight forward commando style approach as I'm not a patient man.

Alpha Protocol suffers from a multitude of problems, ranging from the technical hickups (most of which are small enough to ignore), poorly designed game systems (why do I have go into menus and equip abilities?), a story that quickly spins out of control, lacklustre combat, and graphics that look old, but underneath there are definitely some bright spots. There are worthwhile characters, even if some of them are as poorly designed and voiced as the Russian arms dealer mentioned above, and the system in which you gain their trust or sell them out is interesting. It's that kind of thing that would have me longing for a second playthrough if it wasn't for the fact that the gameplay of Alpha Protocol just isn't good enough to convince to spend more time on it. And while I may have wished for the RPG system to have been implemented better in combat it is still very solid and flexible.

Once again, it would have been nice to make different choices during a second playthrough, but the game just isn't good enough. The system with which you upgrade weapons is nice, and there are enough gadgets to keep Q happy. The conversations and how you make choices are interesting and the overarching story and flashback scenario also does its job.

I'm disappointed in Alpha Protocol. It's problems aren't of the nature that a few months worth of polish could have fixed. There are some fundamental game design issues here that would never have allowed Alpha Protocol be up there with the likes of Mass Effect, Fallout 3 and Dragon Age: Origins. Sure it would have been a better experience if the A.I. had been fully turned on (there is a lot of "chicken A.I" in the game), and if the graphics had been sharper, if the animations would have been up to today's standards, but it wouldn't have turned this into the game that I hope for when it was announced a few years back.

The way I see Alpha Protocol, is that it held a lot of promise and delivered it in spots. If you find this game in a bargain bin (you most likely will soon), you might want to give it a try. Don't expect a brilliant experience, but it stills delivers a mix of elements you won't find in any other game. And for that Obsidian should be commended, unfortunately I just didn't enjoy myself enough to issue this game a better score. 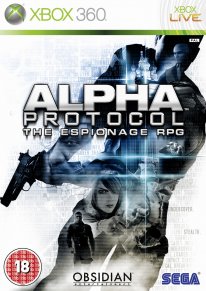