Having put down the controller, at first we find it difficult to think of anything worthwhile to write about Zombie Army Trilogy. On the one hand it's about shooting zombies in the head (which in our opinion is always a worthwhile activity), but on the other hand that's really all there is to it. Of course we weren't expecting a terribly nuanced title, but we're still left with a feeling that Zombie Army Trilogy is missing that special something that would have made it a more complete experience.

The main story opens with a map illustrating the final Allied and Soviet campaigns into the last holdout of Nazi Germany in Berlin. Cut to a bunker where Hitler and his closest generals have convened while bombs drop in the distance. One of the generals meekly suggests that surrender is perhaps their only option, which leads to Hitler shooting him in the face and ordering the commencement of "Plan Z."

That's the extent of the story in Zombie Army Trilogy. When the game kicks off we're dropped into a small village outside of Berlin with orders to find a working car. The village is run-down and packed with decomposing zombies, so either "Plan Z" was very efficient or there's been a time jump that we missed. We found this a bit disappointing because we think we'd rather play a game where the zombie apocalypse is just getting started, rather than one where it's happened already. Still, onwards and upwards, after all, these zombies aren't going to shoot themselves in the head.

Zombie Army Trilogy is a spin-off from the Sniper Elite series (the most recent of which is actually pretty decent, you can read our review here), but there really isn't all that much that ties this game to that trilogy's origins aside from some bullet physics and the series' signature X-ray Killcam. A well-placed hit will treat you to the series' slow-motion centrepiece, with craniums and various organs being shattered by spinning bullets. However, considering that shooting zombies in the head is the only reliable way of killing them, these moments quickly get repetitive.

The zombies tend to come at you in orderly waves when you step on invisible triggers. This means you can always tell if a fight is coming, based simply on the level design and the not-so-subtle placement of explosives around any given area. Also there's no point in sneaking or waiting for the perfect shot because once the zombies spawn they already know where you are. Most fights devolve into a hail of bullets where more often than not you end up shooting your sniper rifle at point blank range, or switching to your secondary weapons so as to deal out some close-range damage.

It's obvious that Zombie Army Trilogy is designed to be played cooperatively. In every cut scene we see a small group of survivors, but if you play the campaign alone you'll never see any of these other characters in-game. The levels are designed similarly to Left 4 Dead, with sections being broken up by safe rooms where you can catch your breath and restock on ammunition. There's never any explanation given as to who establishes and maintains these safe rooms, which are always packed to the brim with guns and hand grenades.

There's three short campaigns here, each with five chapters, and all told there's plenty of content to get your teeth stuck into. Some frustrating checkpoint placement means you'll get extra wear out of certain areas, but perhaps not in a good way.

Looking at it from a single-player perspective, the greatest disappointment with Zombie Army Trilogy is that it actually has a lot of potential. Imagine sneaking around in zombie-infected Berlin with only a handful of sniper rounds, having to find hideouts and fire carefully planned shots to distract or take out zombies without revealing your position. Or imagine seeing a survivor running off in the distance. If you shoot him in the leg the zombies blocking your way will be drawn to him, but could you live with yourself for doing something like that?

Zombie Army Trilogy is nothing like that. Instead of being Sniper Elite with zombies, it's an arcade game built around co-op set-pieces. Ammunition is never scarce and really the only thing you do is throw bullets at zombies who approach in scripted waves. There's no dynamic edge to the game, no nuance to the interconnecting systems. For example, here's a moment that catches our attention, teasing us as to what the game might have been.

We were moving through a ruin in Berlin and we dropped down into a back alley. A pair of zombies shuffled towards us and we dispatched them with two swift shots to their respective noggins. Suddenly we heard a shrill scream and the end of the alley filled up with zombies attracted to the sound. We readied our gun and picked our shots with care. We managed a perfect shot that took out four zombies with one penetrating bullet, and another shot at a zombie with dynamite in his belt took care of the rest. As we crept forward the adrenaline coursed through our veins.

Finally Zombie Army Trilogy had made us feel something. A short moment later we died at the hands of a "heavy" (who, for some unknown reason, can take multiple bullets in the head). We were given the pleasure of playing through the same section again and this time we decided to sneak so as not to attract the attention of the horde. We dispatched the two shufflers without making a sound, only to find out that the horde wasn't attracted to the sound we had made earlier, it was simply scripted to show up as soon as we killed the first two. It was at that point that Zombie Army Trilogy lost us again.

There are certainly positive aspects of Zombie Army Trilogy, such as the soundtrack (which is a delicious blend of anachronistic synth beats and crackling vinyl music). The graphics, even on ultra settings on PC, are forgettable, which is due in large part to the fact that the game is always set at night and the levels are filled with green fog. However, the light and shadow effects are very easy on the eye. It's very atmospheric, and regularly you'll be alerted to incoming danger by glowing eyes emerging from distant mists. It's also worth noting that there's a lot of scenery that will be very familiar to those who played Sniper Elite V2.

It's definitely more entertaining when you bring a group of friends to the party. The structure of the missions screams out for co-operative play. There's very little in the way of subtlety; these are, for the most part, wave-centric scenarios that are more about crowd control than careful planning. You can certainly see the influence of Left 4 Dead in much of the game's design, from the mission structure down to the safe houses that act as checkpoints.

Waves of enemies scale according to the number of players involved in a match (you can have up to four), and there's a little cooperative competition in there too. Each player has a score, and getting the biggest points haul isn't so much about killing the most zombies, but rather stringing together huge combos of kills (it's not a timed combo, but rather down to accuracy).

It builds on the foundations of Sniper Elite, but takes the concept in a whole new direction. Perhaps that's also the thing that holds it back. Rebellion's third-person shooter series is solid, and it suits the stealth-focused gameplay that it's designed for, but the tools and tactics that you might use when stalking through a Nazi base in North Africa are not really appropriate for dealing with waves of brainless undead minions. This isn't about vantage points and careful planning, it's a corridor shooter with sniper rifles.

At least there's plenty of it. To complement the fifteen chapter main game, there's also a horde mode that consists of five maps. There's shades of Call of Duty's zombie mode in there, and the challenge increases quickly as larger and hardier waves of the undead descend from all sides. While the campaign missions are more focused on taking you on a linear journey, these maps will provide a more static challenge for players who have exhausted the campaign.

In summary Zombie Army Trilogy is an arcade-style offering about shooting zombies in the head. It's built around co-op play and will likely underwhelm a solo player. That said, it's still not a great game even if you're playing in a group; it's more about the people you're playing with, not the quality of the overall experience. You'll still have fun with it, and it's far from a write-off, but if all you want to do is kill a few zombies with your friends, there's enough here to warrant a look. Just don't expect to be blown away by the graphics or the story, and don't expect a Sniper Elite game with zombies, because this isn't that.

HQ
Gamereactor UK
+
The soundtrack creates a perfect mood, better when played with friends, solid horde mode, challenging.
-
Repetitive, dark and bland graphics, overly scripted, not great for a solo player.
is our network score. What's yours? The network score is the average of every country's score

"Ammunition is never scarce and the only thing you do is throw bullets at zombies who approach in scripted waves."

Those wanting Hitler to get resurrected so that they can kill him all over again can get ready to do so on Switch later this month.

Crossover as Valve's group take up the undead fight again.

The PC shooter is also coming to PS4 and Xbox One 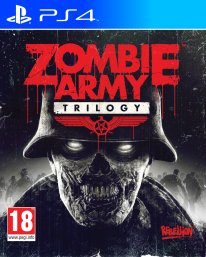