In December we had the chance to took a closer look at Zombie Army 4: Dead War at a hands-on event in Berlin, and while we were there we ended up killing a few hundred undead Nazi soldiers in an almost finished version of Rebellion's upcoming shooter. The absurd plot of Dead War takes us back to the year 1946, but in this alternate history, World War 2 is still raging. You see, those pesky Nazis haven't lost the fight in this reality, and what's more, they have sacrificed their remaining humanity in order to endlessly torment the world as the undead. This crazy narrative is veined with interdimensional pseudo-science, demonic portals and absurd, occult fantasies - it's also a nice excuse to shoot ultra-evil adversaries who deserve nothing but death.

This new co-op shooter is reminiscent of its predecessor and because of this, its innovations are not immediately apparent. One thing we noticed was that the design and architecture of the maps had a nostalgic feel and at times it made us think of zombie genre greats such as Left 4 Dead. Players have to carry out small missions in interconnected areas, always working to unlock access to the next safe zone so that, along with their buds, they can take a breather. Then it's back to shooting undead Nazis, just as you'd expect.

One key area that has been expanded when compared to the developer's previous game, Strange Brigade, is the skills available to the characters. For example, there's a melee attack that kills normal zombies with a single blow, but only when it's fully charged up. If the ability is used during the cooldown, it's simply not as effective. We also found a fresh distraction in the form of the progression system that's linked to our weapon loadout. Rebellion introduces different elemental attachments throughout the missions and seems to have put a big effort into the various unlocks. If you complete all of the challenges linked to a rifle, for example, you'll receive a permanent damage boost that also affects other rifles and tools, which should help incentivise players to try out different weapons and perks.

In 2017's Sniper Elite 4, the developer introduced a Horde-type mode to show what its shooter was able to do in terms of pure gunplay. We also find this same core present in Zombie Army 4: Dead War and there's a number of tactical devices that should help you keep the undead at bay. Electrical wire, plate mines and grenades may not seem necessary in smaller areas, but Rebellion has a knack for turning apparently safe moments into pure chaos in the blink of an eye. We also saw a number of different zombie types that can quickly become difficult to deal with, and isolated players might find themselves under intense pressure if they stray too far from the group. By the way, if one of your allies dies and can't be saved in time, they will respawn at the next checkpoint. However, their reanimated corpse will still shuffle across the battlefield as it looks to bring the remaining living players with them to the realm of the dead.

As you can see, the Sniper Elite-inspired gameplay has not changed dramatically since its last iteration. What caught our eye was how the studio has increased the production values that surround that core. To demonstrate the overhauled lightning effects, we were invited to enter a darkened bunker where the lights had failed and we had to defend ourselves from a horde while getting the generators up and running again. We were a little surprised at how much we had to keep an eye out for ammunition but otherwise, the latest Zombie Army was a reassuringly familiar experience.

That said, the developer has shown more ingenuity when it comes to environmental hazards because we can now activate traps to keep the limping zombies further away from us. In one level, for example, we dropped a chandelier down onto some creeping Nazis on the ground beneath. In another location, there was a broken helicopter-turned-trap that, when activated, dragged our enemies into it. These kinds of interactive environmental features might not come as a revelation for players, yet these small elements do help to enrich the overall experience.

After our co-op session with the developers, they talked to us about some of the interesting ideas that they have in store. We saw a nasty tank that drove through one particular level - some kind of motorised miniboss - and the vehicle reminded us of the war scene from Death Stranding due to its meaty, otherworldly design. Elsewhere, one might encounter a very large, undead shark (that you might have already seen in the game's pre-order incentive). By the looks of it, the team is having fun coming up with creative ideas that in turn help players get a unique and satisfying experience.

That, in fact, is the gist of what we took away from playing Zombie Army 4: Dead War. Rebellion has worked on small-scale innovations and fresh-feeling scenarios to build on some well-established strengths. If you already enjoy the studio's co-op shooters, you will likely have a good time with this next game too. Weekly challenges and events are intended to keep players busy for a time after launch, yet ultimately the innovations seem limited in terms of their scope and what we saw in Berlin wasn't a huge distance from what we've played in the past. The next entry in the series is, in a way, a repetition of a well-known formula, but since the team doesn't seem to be running out of ideas just yet, we remain optimistic and look forward to playing more on February 4, when the game lands on PC, PS4, and Xbox One.

Rebellion throws a spotlight on Zombie Army 4 in 101 trailer

PREVIEW. Written by Stefan Briesenick on the 10th of January 2020 at 11

Zombie Army 4 will arrive in February with undead sharks

In fact, the sharks are so prominent that you can even get a figure of one with the Collector's Edition.

Rebellion: Epic "paying through the nose to build their store"

Jason Kingsley spoke about striking a deal with the company for Zombie Army 4 after saying they'd need a "bloody good deal" to do so.

We got to kill some already-dead Nazis in Rebellion's upcoming action shooter at E3 2019.

The next instalment in the co-op zombie shooter is coming, and we got our first look at it tonight. 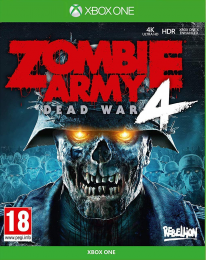