Gamereactor had the chance to sit down with Shenmue creator and former Sega developer Yu Suzuki to talk for a little while after playing Shenmue III's E3 demo in Los Angeles. Here's what we learnt about the current status of the upcoming release, the support provided by publisher Deep Silver, and how Suzuki-san's knowledge of martial arts has helped him make some of the most influential games ever made.

Gamereactor: We're at E3 2019 and it's an honour to be with Suzuki-san now that Shenmue 3 is finally going to release at the end of this year, 20 years after the first game. How is the game coming along? It recently got slightly delayed - we guess it's just a matter of polish. Will the final product be the game you envisioned and the experience you wanted to bring to Shenmue fans?

Yu Suzuki: Yes, I think that now, finally, the game comes close to the end that I wanted to bring to all my fans. There are still some things that I need to work on, but it is almost done.

GR: Is the story going to be over or complete with this episode?

YS: Shenmue has a long original story (laughs). Based on that, Shenmue III [completes] approximately up to 40% [of that original story] of the total Shenmue saga. Shenmue 3 is quite a lot [of storytelling] compared to Shenmue 1 or 2!

GR: In 2017 Deep Silver joined the project. How did that help you realise your vision?

YS: Actually if we only had a Kickstarter-backed project, then I probably could not reach this level and I would probably not be able to complete what I wanted to do. But thanks to the Deep Silver partnership, now it's getting to reach that level I wanted to achieve.

GR: When we met in Barcelona in 2014, you told Gamereactor you were really interested in how CPU processing power was increasing and in how artificial intelligence was evolving. What can we expect in Shenmue III in terms of AI and the interactions between characters?

YS: Yes, those technologies had a lot of influence in the new game. I think one big difference to the previous years is the technology called the game engine, which includes 3D rendering technology in it. Those have made a lot of improvement and progress from a technical point of view, and that's making a lot of contribution to my game. We used Unreal Engine 4 for this new game, and one of the challenges or one of the efforts I made was optimising the use of the game engine to maximise it for my game.

GR: I got badly beaten by this guy when trying to fight him during the E3 demo. What can you tell us about the combat system? Is it still inspired by Virtua Fighter like the original game?

YS: [Laughs] First of all, for Shenmue 1 and 2 I used the battle combat engine of Virtua Fighter. For Shenmue 3 I developed a game battle engine from scratch. This new game's combat engine is much more suitable for the story-oriented RPG type of game, so that gameplay is not that strongly-tied to the timing-system like in Virtua Fighter - even though those [who were fans of VF] should be able to play and enjoy.

GR: This guy who beat me said that my Kung-fu had to improve. I personally practise kung-fu in real life, and I've seen non-playable characters practising Tai Chi as well. How did you get inspiration from the real martial arts?

YS: When I developed Virtua Fighter I had been to China a couple of times. There I had the opportunity to talk to people, to see it, and I did a lot of research over there. That way I learnt about Tai Chi, Kung-fu, and other martial arts, and then I tried to reflect that knowledge I gained into my game. China has a long history, including the long history of Kung-fu. In those historical stories, there are some interesting episodes, so I've been trying to take their essence and put it into the game. That's one thing I've [always] wanted to do.

GR: With so many characters and so many things going on, it is good to have a pad - like the one you've designed for the game - to take notes about everything. How did the concept of a notepad come to be?

YS: I don't think that's the reason why I decided to make that notebook, but in order to do a lot of scenes in the game, it is just necessary! (Laughs) So, without a notebook, you're probably not going to be able to do a lot of things. That's the sort of thought I had.

GR: What can fans expect in terms of story surprises and plot twists?

YS: [Laughs] Yes, you can expect story twists, but I cannot tell you what they are!

GR: I personally loved many of the arcade games you worked on back in the day, and now it looks like retro arcade games are enjoying success once again. Many of them are being revived, some are being re-released along with mini-consoles... Is that sort of arcade experience something you would like to go back to as well?

YS: I would love to! Because I feel I kind of grew up as a developer based on arcade games. So that's why I would really love to try again if I had such an opportunity.

GR: Thank you so much, arigato gozaimasu. With Shenmue III releasing on November 19 - do you have a message you would like to send to fans?

Stay tuned to Gamereactor for more impressions of Shenmue 3 in due course. 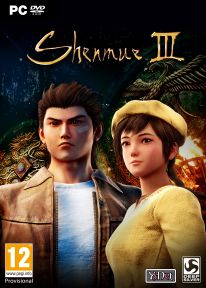