Nintendo has announced a couple of North America release dates today, at the same time releasing some American-centric sale figures for their handheld console, 3DS.

Yoshi's New Island is set to launch digitally and at retail on March 14 (no official word on a European date as yet), and will be followed by Disney Magical World, which is also set to hit retail and digital on April 11 (again, no European date).

At the same time as announcing these dates, Nintendo also offered a recap of last year's sales figures for the handheld. Overall sales were up 45 percent over 2012, with combined physical and digital software sales standing at 16 million, while hardware sales for the 3DS family now stand at over 11.5 million (in the US alone).

"Nintendo 3DS is a powerhouse with games and experiences that appeal to all kinds of players," said Nintendo of America's Scott Moffitt. "We're not slowing down in 2014. With more games featuring fan-favorite franchises on the way, the best days of Nintendo 3DS are still to come." 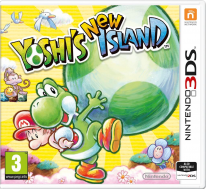