Judging by the huge anticipation building up around Yooka-Laylee after the success of the Kickstarter campaign, it's looking set to be a popular release when it comes out next year. We recently had a opportunity to play a short demo which gave us free reign over a solitary level in the game, and after just a few minutes spent with the game we have to say we're excited on a number of levels.

The first thing to note is that Yooka-Laylee obviously feels like a spiritual successor to Banjo-Kazooie, which is what it was always planned to be, especially given that the team at Playtonic is made up of some of the minds behind Rare's classic platformer. From the title to the art style, and even the humour, it all screams of classic Rare, as well as being reminiscent of Nintendo 64-era platformers in general, and that is by no means a bad thing.

Banjo-Kazooie (and plenty of other titles to which Yooka-Laylee so fondly looks back to) didn't have the most intuitive controls and sometimes it felt a bit awkward, and a big part of bringing these types of games into the modern day is improving on that shortfall, giving the modern player something they're more accustomed to. Yooka-Laylee does this extremely well, and movement felt very smooth and polished throughout the demo, both when moving and during combat. It's also worth noting that the stress associated with trying to access awkward ledges is now a thing of the past, something for which we are very grateful.

Playful humour is a key part of Yooka-Laylee's charm. If technical performance is epitomised by the smooth movement, then its personality is epitomised by the comedy. Whether it be the first character we met in the demo, Trowzers (a snake), to the interactions with Kartos in which Laylee asks if he's the "God of Ore", the comic tone is already confidently and effectively established. There are puns and wit packed into this game, just as it was in Banjo-Kazooie, and yet it feels fresh and entertaining without trying too hard. It remains to be seen whether this is sustained throughout the whole game, but in the demo it was very well executed.

Another impressive aspect of the demo was its scale. From what we could tell the entirety of one level was on offer (the first one we think) and there was a lot to explore, so much so that there was no way of discovering it all in the short amount of time we were given, let alone doing all the challenges. There were characters to talk to, secrets to access, platforming sections to navigate and so much more. Choosing a section to demo at an event is always tough, but Playtonic made a stellar choice with this part of the game, if only for the content it offered. We had to literally pull ourselves away from the controller because we didn't want to stop playing.

The whole thing was visually stunning. The colourful nature of its predecessors has not been forgotten, and the classic 3D platformers of yesteryear have certainly gotten an upgrade. We're not exaggerating when we say it looks incredible. The environment on show had a forest theme, so there were vibrant greens scattered everywhere. Whereas Banjo-Kazooie was characterised by its striking colour palette, Yooka-Laylee turns the brightness up to 11 and adds gorgeously smooth visuals to the mix, something the former was seriously lacking.

The quests we saw didn't seem to link to the central story (which wasn't the focus of the demo) but they did give a taste as to what players can expect. There are little challenges on offer to earn Pagies (the equivalent of Jiggies in Banjo-Kazooie and the currency you collect in order to progress), and these challenges range from protecting an explorer from monsters to riding a mine-cart in order to collect diamonds. Not particularly innovative in their execution perhaps, but certainly befitting the overall experience.

As we come to the end of this preview it sounds as if we're saying Yooka-Laylee is a Banjo-Kazooie for the modern day, and while we are saying that to an extent, the game is much more than just a spiritual successor. It takes all the things that made those classic games so great and improves on them, reshapes the formula, and the result is a game with its own look and feel. This isn't just another Banjo-Kazooie, but instead feels like its own Yooka-Laylee, and that's the most important thing we took away from the demo. What we saw was seriously impressive and we can't wait to play more when it lands on PC, PS4, Wii U and Xbox One early next year.

"There's a lot to do, a lot to find, and a lot of laughs to be had, all wrapped up in a well-designed and polished adventure."

Playtonic's throwback platformer has done well for itself.

After player feedback, Playtonic has made amends.

First screenshot of Yooka-Laylee with the N64 filter

Yooka-Laylee gets a release date on Switch

The platformer is expected on Nintendo's console in December.

You'll have to be patient for Yooka-Laylee on Switch

The platformer has Unity related problems.

First update for Yooka-Laylee is on its way

Big fixes are coming in the "Spit 'N' Polish update. 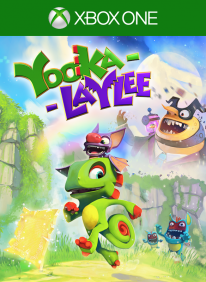