Yooka and Laylee are a lizard and bat duo that we've played as since 2017, when they first rolled our way as spiritual successors to the 3D platformer of yesteryear, Banjo-Kazooie. Their first adventure wore its inspirations on its sleeve, and that's no different with the upcoming spin-off either, as this time around Yooka-Laylee and the Impossible Lair is riffing off the golden era of 2D platformers, something we got to try for ourselves when Playtonic showed us the game at E3 in Los Angeles.

Yes, for this sequel of sorts we're not playing through multiple 3D worlds, but a set of 2D levels linked together by an overworld, except this is more than just a map screen. The overworld itself plays like its own top-down experience and has its own puzzles and challenges to complete to unlock hidden areas and collect Pagies (you'll remember them from the first game), as well as being the land through which you access all of the levels via portals found in books.

The bulk of the game will be played through these levels, which sees you run, jump, and platform your way from one end to the other. It's much the same as you remember from the 2017 game, except there are obvious influences from Sonic (with the rolling), Yoshi (collecting things in your mouth), and other staples of the genre. There are ropes to swing across, enemies to attack, and more to discover as you go about your business, and your health is signaled by Laylee on your shoulder, who flies off when you're hit, giving you a temporary window to get her back.

You don't technically have to go through these levels, since Capital B's Impossible Lair is actually available from the start, but you get extra lives from completing them (members of the Royal Beetallion, in fact). You'll probably need these to take on the Impossible Lair, since even the developers admitted that they can't beat the lair without the help of some extra lives. It's challenging, but fair, we were told, although it's not for the faint of heart.

As you've come to expect from Yooka-Laylee, the art style is colourful and bright, meaning each level is a visual delight to walk through. Varied enemies and obstacles - from rope swings to hanging platforms - litter each area, and we actually found it a lot harder than we anticipated when we jumped in. Playtonic told us that it's all about momentum, and the best results come from stringing together the various moves to flow through the level, which we anticipate will produce a speedrunning community at some point.

When you're done with each level that's not actually the end, however - while the aforementioned Pagies don't expand the level as they did in the first game, here they actually transform it instead. This could mean anything from subtle changes that you might not immediately notice, through to turning the whole level vertical, and it offers a new challenge for players who want to get even more platforming under their belt.

At 60 frames-per-second on every platform, Yooka-Laylee and the Impossible Lair always feels like a fluid experience, and that's the key thing Playtonic is aiming for with this platformer. Taking on all these challenges feels rewarding because of the 'easy to learn but hard to master' nature of things, meaning that, while there are limited control options, using them to gather all the Quills and get to the end in the best possible time requires some serious precision.

The Impossible Lair is a big departure from the first game, but it does to the 2D platformers of old what the original did to Nintendo 64 era 3D platformers, i.e. taking some of the best bits and the essence of what made them great and adding a new spin and style to things. We only got a brief taste, but we're curious to see what else Playtonic has up its sleeve. 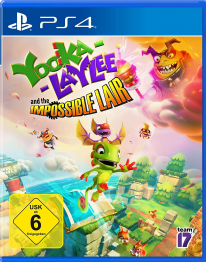