The platforming genre is littered with great character duos. Instantly your mind might default to the likes of Mario and Luigi, Sonic and Tails, Banjo and Kazooie, Ratchet and Clank, and so many more besides. And so, in 2017, Playtonic Games brought another pair into the equation, a pair that are quickly becoming more recognisable in the modern platforming space. Of course, we're talking about Yooka and Laylee.

Once again developed by Playtonic Games, Yooka-Laylee and the Impossible Lair is bringing a whole new adventure for the platforming pair to run, jump and spin through, this time in 2.5D levels where each one comes with a twist. Featuring a similar storyline to the original, which involves Capital B 'bee-ing' a nuisance, the title takes the pair to the Kingdom of Bees, working to stop them from being enslaved by the notorious villain's Hivemind.

Working with Queen Phoebee and her Beetallion, the duo will be pushed to the limit as they battle against Capital B and his minions across 20 separate levels. The twist is that each level can be influenced and replayed differently, making for around 40 unique level experiences. On top of this, each level offers collectibles that unlock new stages in the overworld and extras such as 8-bit visuals or a big head mode for the characters. While a lot is similar to the first game, this sequel truly separates itself from the original by how the abilities have been adapted and by the titular Impossible Lair. You see, this extended level is actually the way to beat the game and you can take a shot at it from minute one, not that you'd be very successful.

The Impossible Lair is a platforming monster and a speedrunner's heaven. Throughout the level, it throws a host of mechanics at the player, and there are no checkpoints at all, meaning should you fail you'll have to begin from the start. Whilst technically it is possible to beat the Lair at any point, players will need some help, which is where the Beetallion comes into the equation.

Throughout the full game, players will be required to free the Beetallion from their cages. These characters are only found after completing a level, meaning there is 40 of them to find. The reason for doing this is that each member of the Beetallion you free will essentially act as a life in the Impossible Lair, making the level several times easier as you further move through the storyline.

The interesting part about finding the Beetallion is there is technically only 20 individual levels but 40 available bees. This is because each level can be influenced and replayed almost entirely differently, as an alternative stage. For example, one of the locations is a dry river bed. The initial playthrough is a typical level, however, if you solve a minor overworld puzzle and cause water to flow down into the bed, the level will be flooded completely, making for an underwater experience, with a Beetallion member at the end.

As mentioned earlier, another key point Playtonic has focused on throughout Yooka-Laylee and the Impossible Lair is how fluid the mechanics feel. Each ability can be chained together to make the pair reach higher or jump further and likewise, the time between uses is almost inconsequential. This means if you input your controls correctly, the duo will seamlessly perform actions in sequence, very similar to how combos work in fighting titles. It's worth noting though, as in the original when Laylee (the bat) has been knocked of Yooka (the lizard), these enhanced abilities will be limited, as the pair are strongest together.

On the topic of controls, fans will be happy to know the title uses a simple control scheme, meaning even though these newer seamless abilities are the focal point, performing them is very easy. Combo-ing abilities is done using two buttons: A to jump and X to attack. By using these in a variety of scenarios, Yooka and Laylee will perform new moves, allowing them to reach different places. The other two main controls are B for interacting with people and doors, and LB for picking objects up, pressing the button again to throw them. This mechanic is very similar to one that Yoshi fans will know well, except here you can only do it to certain things within each level.

One last main point to mention, something that caught our eye whilst playing, was the art style and how it can be manipulated. The base style is the same as the original, using a colourful cartoony design, bright enough to capture the attention of players of all ages. However, the extra styles, which can be implemented in the options menu and are unlocked through playing the game, take things in a completely new direction. For example, we briefly talked about the 8-bit style earlier, a design that can change the visuals to look as if you're playing on a retro console. Other styles can even elevate the difficulty. The spotlight effect, for example, shines a light on Yooka and Laylee and leaves the rest of the screen in darkness. If you've played Spelunky we're sure you can imagine how an effect like this will increase the challenge of the Impossible Lair.

All in all, from the time we spent with Yooka-Laylee and the Impossible Lair, we can say if you enjoyed the original, this sequel will definitely appeal to you. On the other hand, if the first always seemed a little too casual for your liking, the rejuvenated mechanics and the challenge of the Impossible Lair will hopefully pique your interest as it seems Playtonic is working to make this one as enjoyable as possible for all age groups. If that's not enough, then maybe it'll be the consistently daft bee puns combed throughout that'll bee what does it for you when the game lands on October 8. 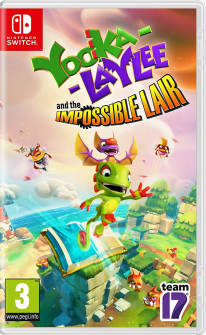