A lot of horror games in 2017 are all about the realistic visuals. You know the type we mean, the kind where you go around in first-person and with just a torch, realising that some little girl or a mutated monster is gonna pop out at you. Resident Evil 7, Outlast 2, and many more have shown that this is a tried and tested method for horror, but there's another title on the block, Nippon Ichi Software's Yomawari: Midnight Shadows, which adopts a slightly different tactic - cute visuals juxtaposed by disturbing violence and supernatural oddities.

While the characters look like they're straight out of a children's anime show, one only need take a quick look at the world around them to realise this isn't a family-friendly cartoon. Everything is bathed in darkness and different hues of browns, greys, and blacks, and while this sounds like all kinds of boring, the level of detail in the environments stops it from sending you to sleep, as does, you know, the horror.

The story follows Yui and Haru, two little girls who go out at night to watch the fireworks, but as they go home they lose each other and must work to survive the night and avoid the various spirits that love chasing you down and murdering you every chance they get. Oh, and did we mention these spirits are invisible unless you directly shine a light on them?

In that sense it's pretty easy to run into an area of ghosts and monsters if you're not careful, but there's one neat little feature that stops you directly bumping into deadly terrors head-on, and that's the heartbeat at the bottom of the screen. This gets way more intense the closer you are to spirits, so in a way it works twofold - it alerts you to danger while also making you frantically scramble with your torch to find out where you're being hunted from.

The unseen is what's most scary about this game, the fear of not knowing what's around the corner, and this places all the emphasis instead on audio. Music is stripped back and absent throughout almost the entire game, and with just your footsteps to keep you company, it's easy to get shook once the heartbeat gets faster and the screeching starts (which also indicates incoming ghouls). As expected this counts doubly for jumpscares as well, but this isn't a game that solely relies on them - they're used sparingly and with thought, and we often found them to come at totally unexpected times without the usual anticipation or buildup.

Spirits come in all shapes and sizes too, which helps to keep things fresh and entertaining, as one minute you could be getting chased by a shadowy figure before a big doll's face appears down the street. All of these are disfigured, twisted, and malformed though, and conflict with the cute and orthodox design of the girls so effectively, that some of them really make for great shocks when they appear.

Each can be outwitted in their own way, and most of the time this will consist of running away like a coward. Rocks can be used to distract them too, but honestly, we only used this once or twice, and instead opted for the tried and tested running and hiding, because that's all that is guaranteed to work. Bear in mind though that the more scared you become, the less you can run, so it's not just a case of running through the map as you please. You can also hide in places like bushes too, which darkens everything else on the screen and reduces your pursuer to a glowy mist that circles and looks for you in a very tense standoff.

The map itself balances size with accessibility very nicely, as the whole thing is huge, but everything gradually opens up logically, with gentle indicators guiding you where to go. Those who want to explore every nook and cranny will still have a whale of a time doing so, especially if they love some good old collectibles, but we rarely found ourselves stuck on where to go or what to do. What's more is that if you get nabbed by a spirit, you restart at the last save point you were at, but everything you had picked up and uncovered on the map is unaffected. A slightly more forgiving touch than in most horror games, but one that we appreciated, as it stopped it becoming more frustrating than it could have been.

One thing that was a tad frustrating though was the frame-rate issues we had, as often when exploring the map we'd get severe dips and stutters. It was never consistent and ongoing, but enough to be noticeable and break the immersion a little bit, which wasn't exactly what we were looking for as we were exploring.

Another thing that dented the horror a little is when the big monsters came out. As we started the game and found ourselves harassed by all kinds of spirits, some of which we only got a glimpse of before we ran from them in fear, we found this totally undone when monsters came into full view. Some are disturbing, sure, but some are just over-the-top and silly, and totally removed the fear factor from the game entirely when they arrived.

So as you've gathered by now we loved the darkness and the twisted nature of Yomawari, and despite some ineffectual enemies, the thing we liked most about it was its atmosphere. In fact, it reminds us a bit of horror masterclass Silent Hill 2 in the sense that we felt this thick and ominous, even oppressive, foreboding as we were exploring trying to find safety, with that constant feeling of unease helping the occasional punchy jumpscare terrify us that bit more.

Basically, Yomawari surprised us, both in the sense of the cute visuals leading us into a false sense of security and in the literal sense (we were jumped countless times). It doesn't rely on cheap tactics, though, but crafts this horribly twisted world that, while it doesn't work exactly to plan all of the time, created a horror experience that we'd recommend to any fans of the genre, especially those looking for something a little different.

Advertisements
Gamereactor UK
+
Dark and oppressive atmosphere, Open but accessible map, Detailed environments, Lulling into false sense of security, Effective scares.
-
Some enemies are bizarre and not that scary, Occasional frame-rate dip.
is our network score. What's yours? The network score is the average of every country's score

"A horror experience that we'd recommend to any fans of the genre, especially those looking for something a little different."

It's the sequel to Yomawari: Night Alone. 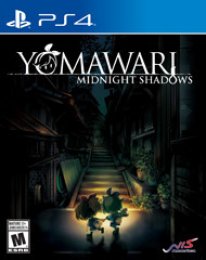