The games were confirmed to have a North American release a while back and are scheduled to launch September 30. However, there was no word on a European release until now. Here's a full overview of the game via Nintendo:

Find, Befriend, and Battle More Than 350 Yo-kai in an All-New Adventure!

Watch out! The strangely charming troublemakers, Yo-kai, are back for an all-new adventure! Find, befriend, and battle more than 350 new and returning Yo-kai. Hop on a train to seek out new towns and new Yo-kai. Teaming up with the heroic cat, Hovernyan, travel back in time to save Springdale, and witness the origin of the Yo-kai Watch!

Features
Embark on an all-new adventure in Springdale with more than 350 new and returning Yo-kai to discover and befriend—each with a unique look, personality, and Soultimate Moves.
Assemble your team of six Yo-kai on your Yo-kai Watch to battle trouble-making Yo-kai, solve people's problems, and end a civil war between competing Yo-kai factions.
Touchscreen-based batle actions initiate powerful Soultimate Moves, purify inspirited YO-kai, and heal your Yo-kai.
Ride trains to new surrounding areas, such as the countryside village Harrisville and seaside town of San Fantastico.
Travel back in time to discover the origin of the Yo-kai Watch and meet Classic Yo-kai from 60 years ago, while you ensure the Yo-kai Watch Model Zero is created and your timeline is preserved.
Team up with up to four players in an all-new action-based local multiplayer mode (additional games and systems required for multiplayer mode. Sold separately.)
For the first time, challenge your friend's team over the Internet in addition to local wireless in two-player multiplayer battles.
Get one of three special Yo-kai (Buchinyan, Noko, or Komasan) by using data from the original Yo-kai Watch game.
Will launch with two versions—Yo-kai Watch 2: Bony Spirits and Yo-kai Watch 2: Fleshy Souls—each featuring Yo-kai that can only be befriended in their respective games.
Collect, detect, and connect real-world Yo-kai Watch Yo-Motion medals (each sold separately, available late 2016) for use with the Hasbro-produced Yo-kai Watch Model Zero watch (each sold separately, available late 2016), and scan the codes on the back of the medals to get in-game content, like new Yo-kai, items, or other bonuses.
In addition to the games, Disney XD has acquired a second season of the Yo-kai Watch animated TV show, which will premiere this summer. 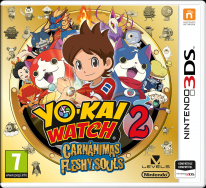