It was recently confirmed that the next Yakuza game will be released on November 10 for PS4, Xbox One and Series S/X, as well as PC. However, today Ryu ga Gotoku Studio also revealed that players on Playstation 5 will have to wait a good four more months for their version of Yakuza: Like a Dragon.

The action-RPG will launch on the next PlayStation console on March 2, 2021, according to their latest press release, although there doesn't seem to be any impact on the PS4 launch plans.

In fact, anyone who buys the game on the PlayStation 4 will be able to play it on the PS5, too, thanks to the next-gen upgrade that will be available at no additional cost next March, Sega has confirmed.

Yakuza: Like a Dragon runs in 4K and 60FPS+ for Xbox Series X

An update to its Microsoft Storge page revealed the details.

Yakuza: Like a Dragon's save file cannot be transferred between PS4 and PS5

This can, however, be done between the Xbox One and Xbox Series versions.

Yakuza 7: Like a Dragon gets PS5 release date pushed back

PS5 players have to be patient for four more months.

And finally brings real dragons to the series. 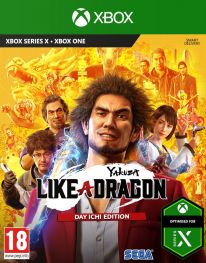