After Yakuza 6 we knew that Sega and Ryu ga Gotoku Studio would be switching things up a bit, including Ichiban Kasuga being the protagonist, and now a new trailer has been released which gives us more of a sense of what we can expect.

Japanese site Game Watch has also been at a press conference for the game, as brought to us by The Verge, and it's from them we find out that Yakuza 7 is taking us to Yokohama rather than Tokyo, with the area being three times bigger than what was featured in previous Yakuza titles.

Combat also looks different as well, as this uses menus more, looking similar to something like Persona (as you can see from this tweet in particular, with a video also showing it in action). This is a big change from the previous style, and Japanese PS4 players can see it in action when it releases on January 16 next year. As for those in Europe and North America, they'll get it later in 2020, although it is playable at Tokyo Game Show next month.

Are the changes good though?

Yakuza: Like a Dragon is headed for PC and Xbox Series X

The Yakuza rumours turned out to be true - Yakuza: Like a Dragon is coming to Xbox later this year.

Could Yakuza: Like a Dragon be getting a PC release? According to Steam Database, it could.

Yakuza: Like a Dragon to get NG+ and higher difficulty option

Yakuza: Like a Dragon is set to get free DLC adding new difficulty option and New Game Plus in a future update.

You can stream the soundtracks right now, including the one for this year's entry, called Like A Dragon.

There are lots of familiar faces in Yakuza: Like a Dragon

Just because the series is heading in a new direction, it doesn't mean it's leaving its past behind.

Sega and Ryu ga Gotoku Studio will let us try the new concepts in a demo, but we don't know when that's coming. 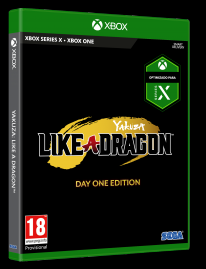