One year has passed since we sunk dozens of hours into Yakuza 5, and these days it seems as though fans have more reasons than ever to be happy, as the traditional sparsity of the franchise seems gone for good. Yakuza 0 is right around the corner, then in the summer we'll get Yakuza Kiwami, (a remake of the first game), and then in 2018 the highly anticipated Yakuza 6 will finally arrive.

At first we thought that Yakuza 0 would be a minor title, and thus we'd be able to quickly get through it, focusing on the main story and a selection of side-quests needed to upgrade characters, just as was the case in the third or fourth games. However, while this isn't an entry that requires the same level of dedication as needed in Yakuza 5, it's still surprisingly addictive.

Sega has been thrifty with its construction, and it shows. The game's nature reveals itself as you progress; there's recycled settings, previously established characters, flashback sequences pulled from previous entries, and even some of the cutscenes aren't fully animated, instead they're comic-style scenes with added text.

Haruka, one of the core pillars of the franchise, is noticeably missing. Elsewhere you'll also come to realise how characters kept improving their abilities throughout previous titles, as here you'll have to learn from scratch using several masters, honing your combat skills (and now you can switch between different styles for each character). All in all the main story is simpler and less impressive (it's nowhere near Yakuza, Yakuza 4, or Yakuza 5), but it's still very engaging and does a good job of telling the story of how two teenagers grew up to be professional criminals.

It really doesn't need much else - the simple approach works, and you care about what happens, quickly becoming attached to the characters. That said, it's only natural that perception of events will vary, and a fan will foresee how some events are about to play out, already knowing who's a friend and who's a villain, recognising certain scenarios and therefore being able to act organically in a given situation. A new player will take their first steps blindly, and thus is much more likely to be surprised by both the plot, and by how it plays.

Even if it's simple, the main story is a lot of fun. The story arc for each character is solid enough, and the side quests opened up by people you meet on the street (there are 100 in total) are often interesting, and sometimes intense. You might be saving someone from being harassed, for instance, or stopping some teenagers from embarrassing themselves, or even helping a fake Michael Jackson film his own Thriller video. On top of that there's all the usual diversions: you can eat and drink anywhere, race radio-controlled cars, fight in tournaments, play in arcades (with fully playable Sega classics such as Space Harrier, Fantasy Zone, OutRun, or Super Hang On), fish, play mahjong, sing karaoke, dance in competitions, workout, play poker, blackjack, roulette, darts, pool, befriend various characters, flirt on the phone...

The list of things to do is pretty much never ending, and we've missed a few too, but we also have to underline a couple of very important things here; these are secondary activities, and they aren't mandatory in order to progress the main story (apart from at the beginning, when some are first shown to the player). Optional they may be, but their addictive simplicity and instant appeal will still end up distracting you for hours. With Kiryu we loved the real estate management mini-game, competing for control vs others in town by buying Kamurocho buildings, and with Goro you'll manage a hostess club and hire girls.

In this regard, Yakuza 0 faithfully depicts Japanese society (just as the series always has done), but here they take into account the eighties setting. The more overt sexism of the period is very much on display: hostess trafficking (even if it was legal in Japan at the time), or being able to watch ridiculous erotic videos of Japanese models in swimwear were pretty common, but in the game may look a bit out of place, even more so when the devs criticise some of these practices in various subplots. Having said that, the criticism is often put to one side, with the devs fooling around a little more than we've seen before in the series, perhaps to underline the progress we've made and highlight the differences between now and then.

But the bigger picture is so detailed that it's perfectly possible that you won't see all of its nuances, unless you try and complete everything that is. That's Yakuza 0's main strength; you can do so many things that you could even play it as a poker simulator, or a music game, for example - nearly every mini-game could very well be released as standalone. Take the RC racing as a case for example; it comes with several tracks and championship events to contest, along with various parts to customise your vehicles. If you think about it, it's difficult to find a series more detailed than Yakuza, and even if it's not near Yakuza 5 in terms of content, you will still find dozens, even hundreds of hours of entertainment here.

And let's not forget that, even if it's an action sandbox, there's also an RPG element you have to keep in mind while levelling up your character. New to this entry is the fact that you use money instead of XP to upgrade your skills, and this encourages you to engage with some of the aforementioned activities, as it's the quickest way to earn funds to invest in upgrades. As if this wasn't enough, the CP (completion points) also improve your fundraising, and those are based on - you guessed it - completing objectives. Every element in this game feeds back into your progression, and you end up upgrading your character to the max while you advance the story.

From a technical perspective, the game looks fine on the PlayStation 4. Recycled assets means that some material loses its impact (for existing fans at least), but the leap to the current generation means Kamurocho feels much more alive, more detailed, and more enjoyable. It leaves us eager to see what Sega can do with Yakuza 6, which will be built from scratch for PS4, so we can say goodbye to those familiar elements we've seen before as an all-new adventure takes shape.

All in all, we'd say that Yakuza 0 would made a fine addition to your PS4 library if you're a fan of the series, and even if you enjoy the genre in general. It certainly looks the part, but above all it manages to entertain in lots of different ways. Combat is smooth (and gets better as you upgrade your character), and there's so much to do that you can get lost in its world. Our main gripes are the less polished aspects (more so following the impressive Yakuza 5), and the fact that things can get difficult if you don't keep your character upgraded. However, this isn't a huge problem for a game that's able to provide countless hours of entertainment, and it does so without you needing to play the first five games to understand the story, as such becoming the perfect entry point to the series.

Gamereactor UK
+
Lots to do. Mini-games and side missions are cool. Really fun, Addictive, Interesting story.
-
Some static cutscenes look below par. Lots of recycled material. Difficulty peaks if you don't upgrade your character
is our network score. What's yours? The network score is the average of every country's score

Play Yakuza 0, Kiwami, and Kiwami 2 for free with Xbox Live Gold this weekend

Yakuza 0 resolutions and FPS revealed for Xbox One and X

With the series landing on Xbox for the first time, how does it perform on a new platform?

Yakuza 0 and Indivisible available on Xbox Game Pass for PC

Game Pass subscribers can now enjoy some stellar games on PC through the subscription service.

Today on GR Live we're heading into Yakuza 0 on PC

Watch us play the first two hours of Yakuza 0

We take on the criminal underbelly of '80s Japan.

We're going back to where it all kicked off. 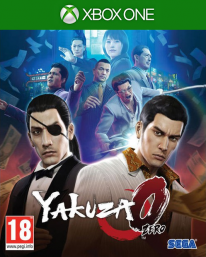