In this day and age, where we're close to drowning in superhero movies, it's becoming increasingly difficult to remember the time when the movies of the genre were being heavily criticised. Movies like Batman and Robin, Spawn and The Phantom didn't exactly let their comic counterparts shine in the best of lights and it was difficult for viewers to take superhero movies seriously as part of film culture. The film that was supposed to change this was the 2000 film X-Men. Not only did it have a great cast, but it also stayed true to the source material.

The X-Men films didn't stay on a steady path regarding quality, however. While they largely succeeded with its casting choices, it didn't always hit the nail on the head in terms of the narrative, antagonists, or the level of detail. It's hard to believe that bad movies like X-Men III: The Last Stand and X-Men Origins: Wolverine reside within the same series as X-Men: Days of Future Past and Logan, the latter being a movie that matches the best of the MCU.

They could have put an end to the X-Men series with Logan but alas, 20th Century Fox chose to make a final film in the First Class timeline instead, using that series as the nearly twenty-year-old universe's final farewell. The result is X-Men: Dark Phoenix, a movie that focuses on one of the strongest and scariest mutants from the comic book series.

The year is 1992 and we get to reunite with the X-Men as we've come to know them from First Class, Days of Future Past and Apocalypse. Following the events of the latter, the mutants under the leadership of Charles Xavier (played by James McAvoy) have won the public's favour. However, the peace this has brought is in danger after the mutant squad takes on a mission in space to save a group of astronauts. Jean Gray (played by Sophie Turner), also known as Phoenix, comes into contact with a mysterious substance that's thought to kill her. Instead, the substance makes her stronger and it doesn't take long before Jean loses control of her new powers and her darker side shows itself. Soon, the X-Men must decide whether or not the life of one of their own is more valuable than the lives of others.

We mentioned earlier that the X-Men series has been blessed with good casting choices in the past and this is true for Dark Phoenix as well. We've already come to know most of the characters from the previous films, but the actors interpret their roles with great skill this time around as well. We, of course, see the greatest change in Sophie Turner, who in the role of Dark Phoenix taps into the dark sides of her acting persona, which she has previously shown us in Game of Thrones. She succeeds masterfully with this personality shift in Dark Phoenix and we would have liked to have seen more of it throughout the film.

We note this because this brings us to the film's weakest point, namely the title character. Dark Phoenix is a character with a strong dark side to her and with strength that's unmatched by other mutants in the comics. She eats suns for breakfast (literally), but the film unfortunately never really lets the true potential of Jean's new powers show. The film could have given us one of the most exciting and iconic character developments in the history of the series, but instead, we only get a small taste of what could have been.

This weakness also doesn't get any better with time because the film has a constant problem with its pace. Throughout the film, it seems that it dwells on the wrong things. Thus, the quiet parts are too drawn out, the sad moments feel out of place, and the intense action scenes are thrown in to carry us on to the next hastily made plot point. Over the course of just over two hours, the film rarely manages to sustain a tempo that feels satisfactory in the long run.

Turner isn't the only one to tap into darkness for their portrayal of a character. X-Men: Dark Phoenix is surprisingly good at showing some of the weaker, darker and more complex sides of our heroes, which certainly benefits the movie, and this will probably stand as the darkest of the X-Men films (except for Logan).

The dark tone is helped by some of the best fighting scenes the series has ever offered. The special effects are the best we've seen from an X-Men movie, creating an action-packed and stunning superhero experience. Admittedly, it doesn't match the best films in the Marvel or DC universe, but it's still impressive enough that you enjoy the cinematography as Scott (Tye Sheridan), Magneto (Michael Fassbender) and Storm (Alexandre Shipp) fight against each other and/or the bad guys from space who are after Jean's powers. The latter group, however, is about as interesting as reading one's tax return forms and emphasises the constant issues these films have had in the past. It's somewhat better than Apocalypse, but not by a lot.

We don't just get dark tones served through the film's visuals either, but also through the soundtrack. John Ottman, who composed the music for both Days of Future Past and Apocalypse, has been replaced by none other than Hans Zimmer. The result is a soundtrack where, for the first time in the series, the music really shines. It's a typical Zimmer score in many ways, but it raises quality of the film, especially during the more intense moments.

Since this is the last movie in the series, it's also exciting to see how director Simon Kinberg weaves it all together with the other films, especially the way he's linked the old and the new timelines together. Here, however, the director twists things more than he tidies them up, and it's frustrating to try and make sense of it all as a viewer.

Is X-Men: Dark Phoenix a worthy end to the series? It could have been, had it not been for Logan two years ago, which set a dignified end to two of the most important characters in the series. However, if Logan is the worthy end to the X-Men series, one can view Dark Phoenix as a useful post-script. It's not a necessary film, but it also doesn't matter that it's the one to put an end to a nearly twenty-year cinematic adventure.

After nineteen long years, 20th Century Fox says farewell to the mutants by giving us a film about one of the strongest mutants in X-Men history - Dark Phoenix. 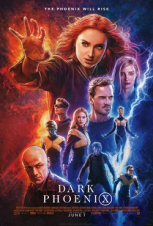