Bit of background to being; I saw this title debuted at a secret THQ meeting the day after St Patrick's Day last year (don't ask me how I remember - I don't. Only photos provide evidence) and back then I thought it looked wholly promising. The NBA Jam of wrestling, was the hope and what I discussed with my colleagues.

We're now just past a weekend (and change) sparring with the WWE All Stars, the name both a tie-in with the company's attempt at connecting with a younger audience and THQ's current ethic of bringing something new to the familiar. It ejects the gravitas of laboured simulation for some much more immediate and interesting to a wider audience.

To sum up, NBA Jam with wrestling.

Despite the claim on the retail version, the packaged form that'll be in your hands come Friday and which I reviewed the game from, it's not important to know the allegiances an relationships that have shifted like quicksand over the twenty-odd years that is WWE's soap opera theatrics.

Sure, it adds something when you go into a Rock/Hogan match knowing the events of Wrestlemania X-8, or the feud that bled out from the ring into real life between Brett "Hitman" Hart and Shawn "The Heartbreak Kid" Michaels, but crucially it doesn't get in the way of, or dilute what is a ruddy good arcade beat'em up.

Folk with only a passing understanding of who Ken and Ryu are still can enjoy Street Fighter - the same principle stands here.

The cast is stylised in that O.T.T fashion that keys into the WWE's love-or-hate-them-but-always-bigger-than-life characters. Here they've been stripped off the restrictions of stamina bars or slowness that's made SmackDown Vs Raw such a draw with fans and a turn-off with others.

Instead the thirty brawlers are divided by their fighting style - tanks versus technical whizz-kids, powerhouses versus aerial acrobats. Their individual dynamics take half a match at most to familiarise yourself with, but offer deeper techniques - combinations, reach distances, Finisher timings - to avail yourself of the longer you play. Its a set up we're used to with Street Fighter, Tekken, but the first time WWE has offered the same accessibility as the 2D fighters, and the alteration proves extremely positive.

This is still a wrestling title though, with the component elements of a WWE match simplified down so the game mirrors the back and forth of a real bout, but without any of the fat.

For the brawlers, your good middle ground class that can soak up damage but still have some showy moves, combinations of punches and kicks last four, maybe five blows before transferring into a grapple. There's two grapple buttons (these and the two attacks are assigned to the face buttons), light and strong. Successfully grab, and you can move round your opponent and pull off an attack, different for each angle you initiate the move.

However, in keeping with the sport's spirit, everything can be countered. To continue the example, the second a grapple moves into an attack, a shoulder button icon will flash on screen. Time the tap right, and your wrestler will flash briefly,and you'll be treated to a reversed more. It's tough to get it right - experience has taught me hammering the shoulder buttons can't trick the system into allowing a reversal. However, reversals also can be reversed. Its the same with combos, and leaping attacks off the turnbuckles. Stick with the high flyers like Ray Mysterio to see some fantastic moves.

You've two special move bars. Bouts slowly charge both, though the flamboyant swirl of the Finisher bar fills much slower than the special moves bar. The former you can crank out once, maybe twice a match if you're lucky. The latter will refill quicker than a student's pint glass at drinks promotion night, and with a double button press (and at spitting distance) initiate a slow-mo special that's big on style and bar-beating ability. You can't reverse either, but a timed chop to the sternum will cancel the move's cue and drop the charge back below the active line.

Its these two that really showcase All Stars arcade leanings. You'll see wrestlers do double flips in the air, or thrust opponents' twenty, thirty feet. In doing so you achieve a rush similar, to use the NBA Jam comparison again, to smashing the net backboard, although with multiple strikes in any given match, that rush gradually subsidies (but never dissipates fully).

As so the flow of matches, 1 on 1s, Triple Threats, Cage, Tornado Tag-Teams, Elimination are rapid fire in their assault and seldom outstay their welcome. While I initially hated the medium difficulty for its perceived unfairness, as reversals were common place, after some time learning the ropes with the Rookie difficulty, medium proved just the right sort of challenging with its AI, and landing reverse-reversals correctly became part of the thrill.

Specials can be avoided if you're out of range, the same with Finishers. Yet If you've shed your way through the multiple stages of your energy bar to the flashing red, you're on a one Finisher-strike away from a K.O. Tap both shoulder buttons once to begin the charge, again to land it.

Having this as a two-step process is important to erase frustration else it'd cheap because of both its suddenness and unblockable status. It manages for the most part.

Aerial Finishers such as Ricky Steamboat's have such a range (basically anywhere within the ring) that the developer has given it a lengthy charge, allowing the observant just long enough to slide out of the ring, or knock him off the top turnbuckle. It definitely changes the flow of the match, and I watch in great amusement as offensive players suddenly vacate the ring during an online game once the tell-tale yellow sheen comes over a wrestler.

It's all balanced well - apart from the inability to dodge a Finisher if your opponent activates it while you're in the process of getting yourself off the mat. It may be possible, but I haven't learnt how to yet.

And that's the surprising thing. I want to keep playing. Load up a quick game, or spar with friends over an evening's worth of beers. WWE All Stars could land itself as a contender for the social calendar. Good thing, as in the long run its probably the multiplayer that is going to sustain the game.

Here's the rub. by differentiating itself from the core WWE game series, All Stars is lessened as a result. You've got your Exhibition matches, and nicely packaged Fantasy Warfare, that has a series of two wrestlers, one old and their 'modern day' counterpart, breaching time and likely healthy and safety laws to lay the smackdown on each other to see who's best. There's a nice intro video that splices their best moments and gets you pumped.

Aside from that, there's a pseudo-story driven Path of Champions, three story choices you can pick as you wish, progressing through a series of matches until facing off with the head antagonist(s) of that particular thread.

And that's about WWE All Stars has to offer. There's a Create a Wrestler mode, but there's little point to it with no career mode or the other extensive choices that the core WWE series can offer.

Even an proper arcade-style progression system, that just let you work your way through the cast in a ladder system ala Mortal Kombat would have been a good addition. That it lacks anything more really weakens the game's longevity and stops this growing out from its pigeon-holing of a brief arcade thrills.

I should note here that the Tornado Tag Team matches aren't even tag-team in the traditional sense - as all four players start in the ring from the beginning. Even MK and Marvel Vs Capcom learned to segregate teams to allow for some tactics. Odd that tag-teams natural home doesn't support it.

Of greater annoyance: the loading times. They're criminally long, and even installing the game to my Xbox 360 didn't shave much off them. Its a real issue, and given that its only the wrestlers and ring that seem to be using the hardware's horsepower (crowds are for the most part silhouetted) I'm puzzled that the developer couldn't have crunched those seconds down somewhat.

Even with the streamlined mode choices, and the appalling loading times (didn't we leave this behind us in the PSOne days?) its hard to dislike WWE All Stars. It breaks down the techniques of wrestling into easily digestible pieces for casuals, but has a enough depth that claiming it to be shallow affair would be unjust. Accessible, enjoyable and different enough from the brawlers out there for it to find a space on your gaming shelf.

After too long, its good to see some other sport has managed marry itself to the NBA Jam formula. Oh alright, "sports-entertainment."

Get a taste of WWE All Stars action.

WWE All Stars mix it up

New pics from WWE All Stars

THQ shows off some more fighters

More WWE All Stars rumble in

PREVIEW. Written by Gillen McAllister on the 8th of February 2011 at 12

Thank you for your time. We will take care of this matter as soon as posible
Still no Macho-Man included? Not that I care of course. 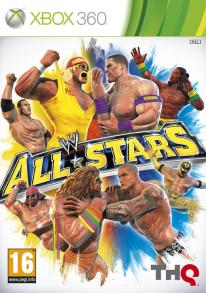