For the last ten years, it seems to have been the ultimate goal of the WWE games to almost surgically remove the fun-factor, and instead try to simulate the WWE circus as meticulously as possible. So much energy has been put into being able to create your very own intros, stacking tables on top of each other for insane jumps, and there are all sorts of clothing items to decorate your fighters - with all these extra trimmings there doesn't seem to have been enough time for the developers to worry about the gameplay itself

While WWE on TV is phenomenally fun to watch (or at least it often is, the last six months have been the worst in a decade) and revolves around insane storylines, always with a comical touch, and some truly spectacular wrestling... the games that look to replicate this physical spectacle have been completely liberated from all kinds of entertainment. Indeed, last year they went a step too far with this approach; it was hardly possible to play WWE 2K 20 at all, and as a game, it can be best summed up as frustrating, full of bugs, and somewhat boring.

Fortunately, 2K Sports made a wise decision and let the series rest for a year. I think it will take longer than that to turn things around, but that's a different story. Instead, the publisher has invested in a lighter wrestling game this year, an approach that previously offered plenty of great entertainment, like the wonderful WWE All-Stars from 2011, and so I was positive about the move. Somehow, these lighter games actually simulate the wrestling feel much better than the more rigid annual iterations.

And that brings us up to date and to the launch of WWE 2K Battlegrounds, a game that has more in common with a fighting game than it does with the WWE 2K titles, where literally everything is exaggerated and legends are mixed with current wrestlers. In this latest outing, there is a wonderful story where manager Paul Heyman travels around the world, looking for capable wrestlers, and everything is framed by a comic book-style presentation. By playing the campaign you get a chance to try out a bunch of different fighters, which is good, although doing so also introduces you to what is perhaps the game's most serious shortcoming.

In Battlegrounds there are only five types of wrestlers (all-rounder, brawler, high-flyer, powerhouse, and technical) and therefore many of the characters are basically identical to play. To make matters worse, there's no great depth involved either. The matches consist of a handful of attacks that are performed over and over again while you charge a super meter/bar in order to be able to perform your most devastating special move. Perhaps the worst part of the experience is when you try to play against computer-controlled opponents, as they have no artificial intelligence at all. This way you can win by simply performing the same attack over and over again, and thus you never have to even try and learn how to play the game.

It feels like WWE 2K Battlegrounds was made in a rush and therefore lacks depth, content, varied characters. The game even has matches that start with the wrestlers just appearing out of nowhere and standing there, listening to their main theme for half a minute. Things are sparse, and so it's surprising that it doesn't help that there is a generous selection of game modes, from Royal Rumbles to tournaments and even cage matches. Despite some variety, it's just not that fun to play, nor does it help that there are lots of minor bugs to grapple with.

Fortunately, there is one thing that the developers put a little extra effort into, and that is the game's economy. To be fair, it should be noted that you can unlock everything by just playing, but there are about 40 wrestlers and it's a ridiculous amount of work to unlock them all. 2K Sports has solved this issue, however, through the liberal application of microtransactions. You could almost ruin yourself by buying all the content for this title, which is one of the most free-to-play-feeling full-priced games that I've ever tested. I really think it's time for 2K Games to reconsider how it handles this aspect in its sports games.

In the end, it is possible to have fun for very short moments with the right company in WWE 2K Battlegrounds, but as soon as those playing realise that there really is no finesse to the action, it results in frantic button-mashing and little more. I think it's such a terrible shame because the overall design was a hit for me and the party-game approach is one that everyone can have fun with, whether you like pro-wrestling or not. This feels like a game that was rushed out to fill a gap, yet it turned out to be even worse than the regular WWE games. Although the more recent mainline games are not much fun to play either, they at least have plenty of content.

Gamereactor UK
+
Cool overall design, fun campaign layout.
-
Lacks depth in the ring, lots of microtransactions, only five types of wrestlers, buggy, lousy artificial intelligence.
is our network score. What's yours? The network score is the average of every country's score

Some fan favourites such as Batista, Goldberg and Booker T will be joining the game soon.

If you've been lamenting the lack of a core WWE 2K sim, we think this might cheer you up.

The WWE agent himself will be a part of the story campaign.

WWE 2K Battlegrounds sure is something and now you can check out an edited 2v2 match from the hybrid console version.

The arcade sports title WWE 2K Battlegrounds sure is a delightful departure from what wrestling fans are used to and this wacky title now has a release date.

2K Games is taking its WWE 2K series in a different direction, adding outlandish arcade wrestling to the mix. 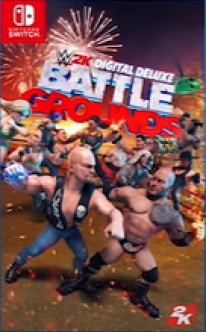