Activision and Disney have today revealed a collaborative project is underway for a Wreck-It Ralph video game, set to be released on Nintendo Wii, 3DS and DS in Q4, 2012.

The game, based on the creations of director Rich Moore (of The Simpsons and Futurama fame), will be a story extension to the anticipated movie, in which a misunderstood arcade game villain tries to prove that he can be a hero too.

The press release lists some plot details. Wreck-It Ralph the game picks up where the movie leaves off, with Ralph partnering up with Fix-It Felix to fight off a Cy-Bug invasion. Ralph uses his destructive power to beat the Cy-Bugs, and switching to Felix allows players to repair the damage.

David Oxford, executive VP over at Activision Publishing, said: "Wreck-It Ralph, as a brand, is perfectly suited for video game stardom. With the fantastic characters and creative atmosphere envisioned by Walt Disney Animation Studios, we know fans are going to love seeing their newfound favourite characters embark on an all-new side scrolling adventure."

The film is set to land in cinemas on November 2, and features a cast that includes John C. Reilly, Sarah Silverman, Jack McBrayer and Jane Lynch.

Activision and Disney team up. 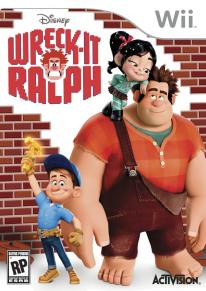