REVIEW. Written by Roy Woodhouse on the 5th of September 2019 at 16

"It's a deep rally sim with lots of modes and plenty of things to do."

WRC's esports competition has its finals this Saturday

This will take place at the Wales Rally GB, and there are plenty of prizes at stake for the nine finalists.

The game is released next week, and Kylotonn sheds some light on what went into creating the experience.

Whether you're on or off the track, there's plenty to do in the upcoming game to become the best of the best.

Kylotonn "wants to push the realism" of WRC 8

Game director Alain Jarniou broke down some of the changes being made, including physics, tires, and environments.

WRC 8 shows great promise in our gameplay video from E3

How does the Ford Fiesta RS WRC handle in our hands when driving in Chile? Well, you'll get to see a roll and more in our footage of the demo.

Bigben and Kylotonn used Community Days to host esports players and get their thoughts on the game in alpha state.

Next game in the WRC franchise to release in September

PC, PlayStation 4, Switch, and Xbox One are all getting a new racing game with the next entry in the rally series set to release later this year. 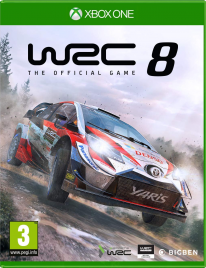